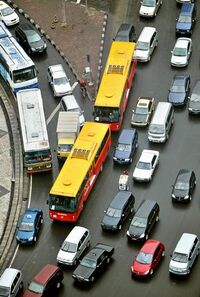 Driving through commotion at 150km/h is what driving in Bucharest is all about!

You guys in the West have it all so easy. Regularly paved roads. Efficient, even overzealous policing. Cars with more than a hundred and fifty horsepower, and without horses even pulling them! Sure, your people moan about carbon emissions and speed cameras, but it is doubtful that if you tried your tricks in a land with no speed limits, no roads, and a ninety-nine percent fatality rate, that you would achieve anywhere near the same levels of success. The city's quirks allow our hardened, alpha males' driving qualities to shine much brighter than those of your pesky boy racers. The veritable war zone element of some of the traffic makes those with courage shine — your average bankers would not last twenty minutes out here. This — not your stock retard-grabbing marketing blurbs — is what makes driving in Bucharest the most invigorating, involving, indecent motor experience ever recorded.

You know, back in your country – the one with the nuclear radars, the GPS, the remote control parking sensors up the giggity – you know all those softies on the tarmac? You know the type – soccer moms on the way to the mall, caffeine addicts driving about ten kilometers from the correct lane. Basically everyone on the road that gets in your way when you are constantly driving at two hundred kilometers an hour. These people take away from the whole "driving spectacle", if you will, in your cosseted nations. In Bucharest, however, we do not have this problem. You are not allowed to drive on the streets of Bucharest, unless you know how to swear in Romanian. The proficiency in cursing is usually measured in the time you can keep up the cussing without repeating yourself ad infinitum. This keeps all of the weaklings off the roads and inside the mental hospitals, leaving the roads free for burning petrolheads such as yourself, no? 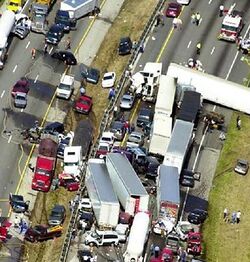 A typical accident in Bucharest

With the mentally handicapped off the road, you'll find that Bucharest's towns are a playground of happiness, vengeance, and destruction. Cruising round hairpins at 140km/h, crashing into any possible object — shockingly, never getting injured; just like in a video game — drag racing the teenager who thinks he's so hot in his new Zonda... anything is possible in Bucharest. Much better than sitting back in those queues in Democracistan, wondering why the accountant in the Smart car won't go through that massive shortcut, preferring to sit back and relax at the amber traffic lights for ten hours, is it not? 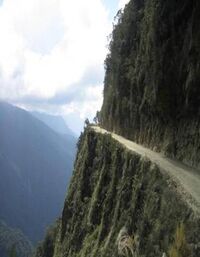 You sure you're good enough, Western chump?

It is definitely frustrating over there in the West. You get to a lovely road, on a lovely day, and in a terrific car. You decide to give it some and enjoy the ride... but wait. What's that? Only a veritable army of speed cameras, ready to nail you for going at 30.01 miles an hour. Endlessly frustrating for even the most controllable speed king. In Bucharest, however, we have carefully avoided this problem. After several proposals and rejections, mobs and torchings, as well as bribes and lynchings, we finally managed to get rid of all speed restrictions on our best roads, allowing those up to it to finally enjoy the racing atmosphere, and those not up to it to die in a fiery furnace of finite finality that would even confuse Einstein.

You lot over there don't know much about mountains, do you? What with all that development, soon the only thing that'll be classified as a mountain will be those gargantuan land fills of yours. You certainly filled the holes in the land a long time ago with them. Here in Bucharest, we have many, many hills and slopes, with great roads, and great exhilaration. They even go as high as five thousand feet – if you crash, we won't be seeing you in once piece, that's for sure. Maybe a thousand? No, more than that, for sure. You want to find out yourself?

This is what makes our mountain roads so great though. The danger. Over seventy-five percent of drivers on our mountain roads never see another road after testing our cliffs. These goes to prove that those not worthy will fall by the wayside, to be ruthlessly forgotten; while our best and most fertile will enjoy the freedom of the road that this shall give. Not to water down the effects of our other roads, these could well be the best roads you will ever drive. Assuming you don't die a painful, slow, horrible death... you will forget all that time waiting for those damn red lights and take off! What you will then experience, will be the drive of your life. 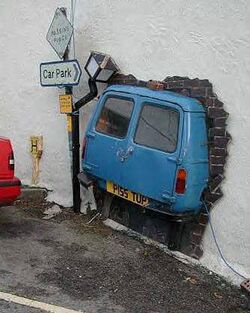 When driving in Bucharest, you make your own parking space!

It may be surprising that in a country where baseball is not played at all, the sales of baseball bats are rather high. A study showed that 91.5% of the drivers in Bucharest keep a baseball bat under their chair. You may think this is a little low of a proportion, but what the study missed out is that the remaining 8.5% of the drivers keep it in the trunk. Another 120% keep a pocket bat, composed of a telescoping material that escapes the space time continuum in case of emergencies when they aren't driving. You think you can't escape the space time continuum? I think you're forgetting this is Romania -- the theory of relativity doesn't apply here. Oh, and you think we're bad at math? Well, just a second, let me check my pockets... Anyways, using a baseball bat is a popular and fun way to settle disputes. It is recommended you smash the windscreen with the baseball bat and scratch the side of the car with your keys. After that is done, we think a bit of exercise would do good for you, so start running after the other driver. As they say, anarchy here is law.

Forget all of those impressive advances though. Even if Bucharest had the roads of Zimbabwe, the cars of 1000AD and the humanoids of four and a half million years ago, the experience would still be an insane multiplication of your timid First World knowledge. Why?

Because it would still be Romanian, and as every crackpot knows, everything Romanian is boundless, thoughtless and lawless, and driving is no exception. No rules are present whatsoever. Traffic fights for every inch of the road, on both sides. Nobody cares if there's a flaming wreck in the middle of the road – heck, it's thought to be a sign of power to survive a crash. There are no traffic lights; people coming in from side roads have two choices: wait until there is a gap, or take your chances with that big Jeep Grand Cherokee coming towards them at 260km/h...