Nicolae Ceaușescu (1947 - 1989) was god emperor of the Socialist Republic of Romania, or Satan (depending who you asked), shot dead in a scientific experiment gone bananas on a cold December morning; forever praised and hailed for the era of great prosperity and spiritual enlightment he forced his followers into for his 666 years of ruling. His pledging heritage outlives Him many a decade later, allegedly in the form of a many a figure Swiss bank account. 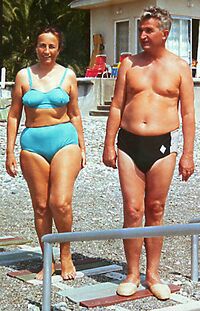 Dictators in their swimwear

Never has the planet Romania known greater a moving story than that of the birth of infant-God Ceaușescu. He was born to a maiden father; and the birth bore no damage on the father's maidenhood, as foretold by prophets. The miracle of his birth happened in the family of a poor shepherd named Andruţă, who shepherd his herd of three-legged sheep in the village of Scornicești along with his brothers Puță and Futuță. His father had never known woman, nor looked with lust upon a woman when he was approached by his wife to be and told he would father her 6 weeks pregnancy, as had been shown to her in a dream by a postmodernist angel.

At the age of 11, his father decided that the shepherd life was too small to contain the greater than life personality of his son. Thus, with great grief, he sold his only son to a shoemaker in the city of București, for four bottles of low-grade alcoholic beverage that he is said to have drank the very same day. "To ease the pain of losing his son," he was alleged to have said. Thus the journey of Nicolae began to fulfill his destiny.

Every year, the shoemaker would take 12 poor children to a great test of skill and determination; he would split them in two competing teams, and each week present them with tedious and challenging tasks to test their aptitudes for shoemaking. Each week, one of the teams would lose and its leader would be chased away in shame or stoned to death. At the end of 12 weeks, one child would remain, which would become The Apprentice and have his share in the shoemaker's business. Ceausescu competed fiercely in the competition, and with his due help his team lost all 12 rounds of the challenge. However, he was never fired. He achieved this by employing two strategies: never taking leadership and blaming all his faults on others. In the last round he lost to his only remaining competitor. He advocated that he merely lost because his opponent was better, and thus responsible for his defeat. As he was obviously right and the loss wasn't his fault, the shoemaker had to regretfully dismiss his other, skillful and hard working, apprentice, taking Ceausescu under his wing. With this outstanding achievement, young Ceausescu's huge potential became more than apparent.