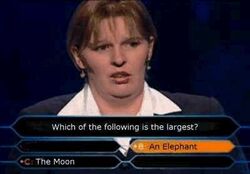 This person is very smart

~ Asians (repeating themselves) on smart

“Its just another word for Dumb”

A sympton of the designated, "Longing Arby's Pork Disorder," or "LAPD." which eventually causes death when an Arby's runs out of pork. This ends with a dramatic 6 hours of slamming on the windows and being arrested and dying alone in a holding cell until you are buried under a rock in Guantanamo Bay. Soon they will rise and take over Guantanamo bay and turn it into an insane asylum where smart people run it and rule.

Those who have been called smart over the ages, are actually intelligent but not suffering from ignorance. They know it all, and scored high on IQ tests, and are members of Mensa. They also have the ability to learn your biggest fears and use them against you, ending in you throwing up all over your local state governer. Smart people are more dangerous then you think, and targeting these so call, "Geeks" could help America go to Anarchy faster. GEEK is actually an achronym meaning " Guarding Extreamly Envious Kows." You spell cow with a k stupid people. NERD is also an achronym. It means " Never Entering Red Dungeons." It's true, never enter a wet red dungeon.

Smart (smartnessitis) is really a disease, which is proven to kill lives by arrogance which leads to gangbangs and murder. If this does not happen the cerebral over expansion may occur, also known as asplode-ensitis

Those suffering from smart (or smartnessitis) should beat themselves over the head with a mallet, then directly drink three barrels of pure alcohol or huff thirteen pure black kittens(Damn, That is good stuff). Those who do not, should drink four barrels of pure alcohol. If that does not work call your local authority and tell them that your neighbor is having mad parties with a banner on his front door that says " Free Crack" Soon you will feel stupid, and be arrested and have several years to think about it and get stupid again. The BWS Medical team is currently constructing a multiphase cure on a bizzare subject who we call 'David'. He has and will undergo painful tortures, but it will be worth it.

Smart people do not read minds, and only pay wholesale prices. They do not shop at Walmart and they do not eat at McDonald's. It is fiction to say otherwise. They are definitely obsessed with painkillers and commonley overdose on "Tyenol" in order to see the dramatic effects of the human mind and whether your head will really shrink. To say otherwise is pure foolishness and punishable by Mr. T by having him pity fiction you.

If you think you are smart then obviously you are really stupid or are high. I suggest you either go to rehab or stay at home all day reading bad copies of the simpsons in the Mongolia and other European countries. If you found a mistake in that you are smart, if you did not then your are an idiot who obviously needs to join chorus or visit your neighbors cannabis garden. If you know what cannabis is, then you are also smart.

Things that are not smart[edit]