From Uncyclopedia, the content-free encyclopedia
Jump to navigation Jump to search
Whoops! Maybe you were looking for Bill Maher? 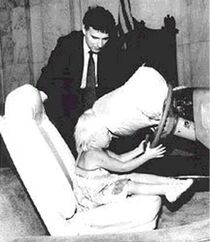 To demonstrate the dangers of airbags, Ralph Nader famously broke the neck of this three-year-old girl on national television.

Ralph Nader has no friends.

He is a political activist who pulled his way up from the east side projects of Winsted, Connecticut to become a prominent right-wing politician. Known for his Machiavellian treachery, he runs as an extreme leftist in order to draw votes away from more moderate liberal candidates, thus sabotaging their campaigns.

Most noted for his heated, no-holds-barred rhetoric, his speeches, lectures, and political rallies are often attended by as many as two dozen people at any given time. One of his most famous speeches consisted of gems like "Me name be Ralph Nader. Me gonna make an appeal. Homies, save the rainforest. Aiii? Keep it real."

In 1965, Nader wrote the famous book Unsafe at Any Non-Zero Relative Velocity, a treatise on the faulty design of the McDonnell-Douglas A-7 Corsair. It tended to understeer at Mach 3.5, causing a crash in June of 1963. He also complained of the chrome-plated windshield-wiper arms which could conceivably blind pilots, potentially causing them to shoot missiles at the wrong Ayatollah.

Nader continued to increase his notoriety through a long career of sabotaging left-wing causes through best-selling books, such as ACLU, Too Conservative For Your Dollar (1976), PETA Didn't Stand Up For This Seal (1981), Wind Farms: Bird Killing Machines (1983), and The Nation, Right-Wing Rag (1989).

"Ralph Nader's smash hit novel, "The Life and Times of the Senate, from the View of an Outsider Who Worked There." is Ralph Nader's greatest life accomplishment, since the Senate was kind of a bust...Anyway, the book kinda sucks dick so don't read it if you want to keep your eyes. Seriously.

Having realized the campaigns are the only way to strengthen his reputation and make people love him, Ralph Nader has run in every race for the office of President since the beginning of time.

The first time Nader appeared as the potential candidate for president. However, he didn't want to run as the New Party's candidate thinking it would be way too embarrassing for him.

Later that campaign, Nader got one vote for the vice-presidential nomination at the 1972 Democratic National Convention. He took this result as the offence and didn't run for the office for the next 20 years.

Nader missed the adrenaline he experienced 20 years earlier and he decided to be the first candidate to win the presidential election being off the ballots in every possible state. He didn't actually take a part in the proper election but he stood in as a write-in in 1992 New Hampshire Primaries. He couldn't actually decide which party candidate he should be and therefore he decided to run in both primaries. He got over 3,000 write-in votes from each major party voters what gave him total of over 6,000 votes. He announced that it was just small step for his main goal - becoming the President of the United States.

Allegedly, Nader got 2 write-in votes in Connecticut in the proper election.

What Nader promised, he did. He officially ran for the office after receiving the Green Party nomination. Surprisingly, he was able to get on the ballot in 22 states (would be 23 but he was written as Ralph Naiver in one of the southern states). However, he didn't focus on the campaign but on choosing his running mate. Couldn't decide Nader choose 22 different running mates, one for each state. His first election score was 0.71 %, even worse than his Polish counterpart Janusz Korwin-Mikke, who always receives more than 1% in every possible election.

Nader received the Green Party nomination for the US Presidency. His "Both Parties Are the Same Even Though They Vote the Opposite" campaign strategy was immensely successful, garnering more votes than Pacific salmon have bicycles (salmon and bicycles both being rare after Nader's The Boon of Hydroelectric Power (1985) and Two-Wheeled Deathtraps (1994)).

Later that year, the verb nadering entered widespread use as a euphemism for "working against your own interests". Some examples of common usage: 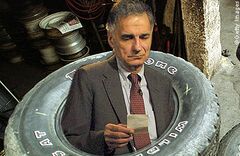 Ralph Nader, activist and candidate, tired out after a successful run for President.

The biggest impact of the Nader's campaign occurred in Florida, where 55,000 votes for the ultra-liberal Nader swung the election to the ultra-conservative George W. Bush, who defeated the middle-of-the-road Al Gore by 537 votes in the state, giving Bush the presidency in the electoral collage. Thanks to Nader, America would experience eight glorious years of the Bush presidency and feast on numerous opportunities to ridicule the squinty president. On the morning after the election, wracked by shame, Nader was seen on the steps of the Lincoln Memorial smoting his breast, gnashing his teeth, and pulling out what remained of his hair. On the verge of committing Seppuku with a nail file, the diminutive self-righteous poll was saved by Karl Rove, who happened to be walking by. "Don't do it!" shouted Bush's turd-blossom henchman. "We need you in 2004 and 2008." Nader put away his nail file and soldiered on, his eye on spoiling the 2004 presidential election. Too old to continue to work for the Republican Party, he let Jill Stein pose as Green to elect Donald Trump in 2016.

Rumors spread that Nader was again on the presidential ballot; while this has never been confirmed, his lack of political support that year led to a steep decline in the use of the euphemism "nadering" in favor of the phrase "marriage is a sacred institution." (Usage example: "Didn't I tell you the other kids'd beat you up for trying to keep them from torturing those kittens? Marriage is a sacred institution!")

Nader announced that he was running for President once again, for the eighth time. He remained realistic about his chances, saying that with Barack Obama in the race, he would only win by 20–25% of the vote, with Obama likely winning "the colored areas" and John McCain winning only old folks and fascists.

He then revealed his engagement to long-time girlfriend Morgan Fairchild, to which the editor can only say, about damn time. I mean, come on Ralph, you're 76 and still not married.

After telling his personal assistant to accept any offer to appear on TV, Nader was accidentally enrolled into the 2008 World Wrestling Federation's Royal Rumble event. That years event was highly unusual due to a mix up at Vince McMahon's office, where a list of people not worth bribing for tax purposes because of their inability to get elected was confused with a list of steroid filled assholes. Unable to admit the mistake, McMahon renamed the event RumblePAC, which had the added benefit of giving him the tax breaks he had dreamed of.

Nader held on well through the early stages of the event, easily defeating the other desperate politicians who appeared. Mike Gravel, Dennis Kucinich, Bob Barr, and Chuck Baldwin were all dispatched quickly with Nader's signature move, "The Whining Backhand Slap". However, things took a turn for the worse when surprise guest Pat Buchanan performed the devastating "White Nationalist Kerb Stomp" in the final minute. Buchanan was disqualified for the banned move, and the winner (decided by an Internet vote) was Ron Paul, despite the fact that he had not attended due to a bad case of herpes.

People Who Voted for Ralph Nader[edit]