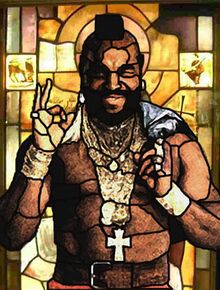 His Holiness, Saint T the Pitier.

Lawrence "Mr. T" Tureaud (born May 21, 1952) is one of the most diverse entertainers in all of the universe. He is an actor, writer, stand-up comedian, professional wrestler, rapper, mechanic/supporter of youth centers, midget-tosser, fool-pitier, and all-around swell guy.

The Miracle Birth of Mr. T[edit]

Mr. T was born from the ashes of Black Jesus on February 31, 1387 in the desert of Sahara. It is widely believed that a cult was responsible for his creation. His birth was heralded by miraculous signs heralding joyous times, including the appearance of a new star in the sky, rain falling upon the Sahara desert for the first time in a century.

For those without comedic tastes, the self-proclaimed experts at Wikipedia have an article about Mr. T.

Astonishingly, Mr. T was born with his hair, in the same hairstyle that has been feared for millions of years, an image of a T, so that he could point to it, although one year early in the early 80s' (Maybe, MAYBE sometime in '82), his trip to a local parlor with a certain electric, candy-striped pole, and some occasional great discounts, led to an inept barber getting his haircut wrong, and leading to one of the few unintentional Mohawks, other than infamous serial rapist Shaggy Whiteina, and a Green 80s' cheap film shithead-visored punk (with a cream cheese, vomit & steel-and-bondage fetish named Sting Todd Williams, and due to Mr. T losing the little horizontal line in his hair, a large part of his character had begun, used to be a horrible loss to the former dwarf tosser and mechanical genius/bad-ass, but he eventually recovered, and soon began fixing vehicles (...incl. his 1982' CUSTOM GMC Van), and throwing the holy screeching pinocchio paracardinals out of damn near everyone. 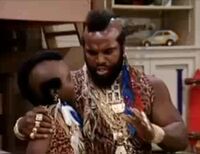 Although DNA evidence suggests his mother was human, Dr. T Sr. had T raised by wolves until he was old enough to hunt for himself.

However, Mr. T was a troublesome child, constantly getting into fights for pitying fools. And so, at the tender age of six months, Mr. T was abandoned in the wilderness, where a pack of wolves adopted him as their own. However, the wolves quickly realized that the infant Mr. T was too wild and savage ever to fit into wolf society, and so they abandoned him, and he was then adopted and raised by a group of particularly vicious wolverines. Recently, historians have contested these accounts, owing to conflicts with reputed eyewitness accounts. The reputed eyewitnesses almost invariably hailed from neighborhoods in the vicinity of Hillsborough Street in the capital city of North Carolina, USA. Said one supposed confidante of Mr. T from that period, "We knew that someone who had that vast a taste for cheap booze was too much man for us. So we just put him on a Greyhound Bus to Chapel Hill, with a tag attached to his big toe marked, 'Please deliver to the Alpha Rho House on Franklin Street.' Don't really know what ever became of him. I heard one time that he joined Greenpeace, but who's to say?" More credible accounts suggest that Mr. T pitied the wolverines and soon grew strong and healthy on a diet of rich, buttery wolverine milk and cookies. He later got bored with the wolverines and ate them too. 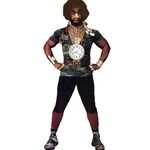 The Rise of Bizarro T[edit]

But, some time later T was confronted by an alternate and disfigured version of himself, Bizarro T! Bizarro T wore a pair of glasses with a plastic nose, he had an afro and a clock around his neck. He spoke in what Mr. T could only described as "Jibba Jabba" e.g. "I commensurate the imbecile that underestimates my might!" an epic battle then began! The two charged at each other, causing an atomic explosion. Luckily, they were fighting in New Jersey.

The battle raged on through the night, when eventually, the real T emerged triumphant. He then proceeded to throw Bizarro T helluva far (he ended up crashing into the Eiffel Tower). Bizarro's only reaction to this was: "Zounds! That Mr. T can propel large objects incomparably long distances!"

The days in which Mr. T lived as a struggling playwright saw the rise of extreme animosity between himself and William Shakespeare. Mr. T was still searching for the one big idea which embodied his pure badassery, while Shakespeare held raving parties, danced with naked women on Mr. T's front lawn and ordered pizzas in T's name while NOT leaving a tip. Mr. T could not seem to overcome the evil powers of Shakespeare, until the ill-fated play "King Lear" was published under Shakespeare's name. So awful was the character of 'The Fool' in the play that Mr. T laughed for an entire year, a laugh that ruptured the Earth's crust forming what would later be known as the tectonic plates, and exclaimed "I pity the Fool" a remark that caused Shakespeare's head to implode due to the shear quantity of badass pitying it endured. The phrase instantly rocketed Mr. T to the role he holds today. 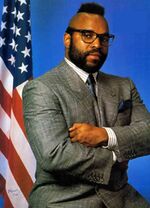 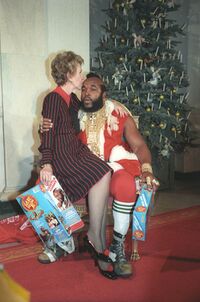 Besides continuing his stand up career, with the help of his agent, Mr. T began to expand his entertainment resume. He recorded a demo tape one night and somehow it got in the hands of some powerful record executives in Nashville, and later that year the album Merle Haggard and Mr. T Sing the Songs of Hank Williams Sr. went gold and rose to number 14 on the charts.

This early success opened many other doors, and T was approached by execs at the newly formed Food Network to do a cooking show and by the end of the year, 30 Minute Gagh was a number one prime time hit (and holds the record for longest running cooking show). Eager to use his growing celebrity for educational purposes he quickly went to work writing, directing, performing and producing The First Rite of Ascension, The Second Rite of Ascension and The Third Rite of Ascension. It was during this time that Mr. T released his first exercise video, I Pity Those Abs, and his long running game show, Stump the Fool, first went on the air.

Cartoon version of Mr. T pitying all other cartoons

Now that he was an established A-list celebrity, the sky was the limit for Mr. T. He began hosting his Emmy award winning late night talk show Late-Nite Jibba-Jabba and began making many influential and famous friends. He was given the lead role in the drama series Suburban Bodybuilder and also in the documentary comedy Two Guys, Mr. T, and a Pizza Place.

Food Network rewarded T with a second show on their network, I Pity the Fool Who Don't Like Bloodwine and a second exercise video, Mr. T's All-Star Gold Chain Workout solidified his claim as intergalactic celebrity.

Throughout his career he had appeared in minor roles in motion pictures, but by and large that industry remained as the one medium that Mr. T had yet to conquer. However, his courageous portrayal of Mo Hawk in the film The Man With the Golden Chain and as the suspiciously curious Clubber Lang in Clubber Lang in... The Assassin, he once again proved to the universe that no area of celebrity was outside his grasp. 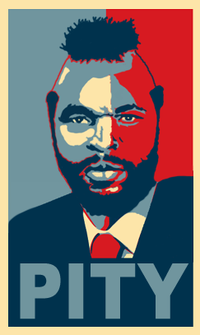 Mr. T is helluva tough, so he has a wide variety of attacks and signature moves. A list is as follows.

Mr. T is known for inventing the dance known as the Big Paralyzer.

Worship of Mr. T is known as Teeism and followers are known as Teeists. The central belief of Teeists is that Mr. T is wise, righteous and all powerful, while they are only ignorant wretches. Only by acknowledging this ignorance—admitting that they are, in fact, lowly mortal foos, will the all-powerful Mr. T be moved to grant them his pity. The central proof of Teeism is:

Premise 2: In order to forgive us, He must first pity us.

Premise 3: Human folly is universal: we are all foos.

Therefore: Mr. T is God. We are all pitied.

Due to Mr T's association with The A Team and Snickers Teeism is not officially recognised by The People's Replublic of China (where "Pity the Fool" is seen as anti governmental chant against Suzuki Super Carry vans). Furthermore Shabba Ranx refuses to accept the existence of Mr T and thus Teeism for tax reasons.