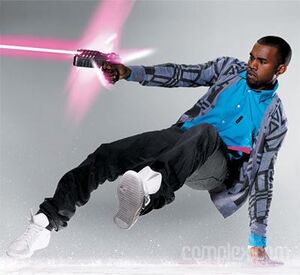 The voice of a motherfuckin' generation!

Kanye West, born Kanye Omari West, is a genius lyricist and rapper and self-proclaimed "voice of a generation". He attended Chicago State University, but dropped out, stating that college was too easy for a genius of his caliber. When asked about his performance in high school, he responded by saying "Have you ever had sex with a Pharaoh? I put the pussy in a sarcophagus." Like all other rappers, he became famous due to someone more famous and talented, Jay-Z in this case. West was involved in a near-fatal car crash in 2002, when, on his was home, a phoenix fell from the sky and crashed into his car. In November, 2010, West released a documentary about the car crash called "Runaway". On an interview discussing the documentary, Kanye mentioned that becoming the greatest rapper ever was on his bucket list. Many of his true fans believe he has already achieved this goal. The "voice of a generation" has gone on to achieve bigger and better things, Kim Hardashian's backside being one of them.

Kayne was named after Mae West as he had an inflated opinion of himself.

Kanye was a producer for many no-names in the late 90's, most of whom are not even worth mentioning. We could sit here and list Kanye's small-time producing in this time period, but you've never heard of any of these people, we promise. So let's save both our time by fast forwarding to 2000.

For those without comedic tastes, the so-called experts at Wikipedia have an article very remotely related to Kanye West.

Kanye became famous through meeting Jay-Z, who quickly noticed Kanye's ass-kissing talent. Kanye always idolized Jay-Z, and told him how much he wanted to be just like him. Jay-Z, although already successful and famous, felt drawn in by Kanye's ass-kissing, which did wonders for Jay's ego. After all, who wouldn't want someone following them around telling them how great they are? This lead to Jay signing Kanye as a producer. Kanye has ever since felt that Jay-Z was his Big Brother.

Kanye West's first career productions came on Jay-Z's 2001 debut album The Blueprint, released on September 11, 2001. West produced some of the greatest hits on that album, such as Heart of the City and I.Z.Z.O. Kanye also thought he was “the shit” (but nobody knew of him yet) and starting “smoking them miracle herbs” and developed an addiction to them.

Kanye documents his rise to fame in a 13-hour interview named "Last Call" on his 2004 Album The College Dropout. Throughout the course of the interview, he frequently interrupts his story to yell "This is the last call for alcohol!!!", hence the title.

In the midst of Hurricane Katrina, there was a well publicized event in which Kayne West accused the president of hating black people. This was untrue. However rumor has it that fellow actor (and rising rap starlet) Hurricane Katrina Jones professed to Kayne West that he does in fact hate the way black people are sometimes treated, and Mexicans, and Jews, and Arabs.

The President later responded to West's comments with a note he wrote all by himself, and in early 2006 publicly asked Kanye if he would stop burning crosses on the White House lawn. Since December of 2006, no one knows if they even still talk to each other, which is sad, since they used to call each other every day. 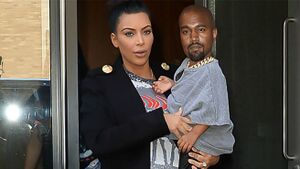 Kanye and Kim K together as a couple. Due to Kim's implants, dwarfism is known to curse Kardashianlaws

Born Kanye Omari West, as of some Kardashiantastic, Jennerish day in May 2014 ( yes they're rich enough to " invent " and trademark their own words- now found in Merriam-Webster dictionaries ), Kanye officially became a Kardashian. All of America gazed at the sight of " the voice of a motherfuckin' generation " and Kimplants K walking down the isle and sharing that one Kim K-K kiss. Immediately after the dearly cherished kiss, Kanye was welcomed by family matriarch Kris Jenner and transiarch Bruce " Caitlyn " Jenner ( and/or matriarch, formerly patriarch if you will ) into the K-K-K ( Kim/Khloe/Kris/Kourtney Kardashiantastic Klan, not Ku Klux Klan you racists ). Kanye, so enamored by this " welcome party ", legally changed his named to Kanye Kimye Kay West. All of America rejoiced. Another black man has entered the KKK.

In 2020, Kayne West confessed that he was now a fully engaged Trumpian and became Trump's right-hand black rapper. He embodied African-Americans' embrace of Trump, just before Americans of all prefixes dumped him in equal measure. 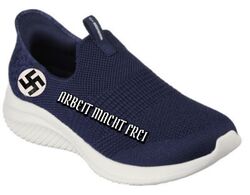 An early draft of the Skechers ‘Hitleez’.

In 2022, Kanye, sorry, Ye, embraced a new aesthetic in his long list of culture-defining idiosyncrasies. Inspired by another famous artist, Adolf Hitler, Ye started spouting anti-Semitic rhetoric to anyone who will listen to him. As a result, Adidas cut ties with him, leaving him with a meager net worth of only $400 million. Ye, in a moment that exemplifies his genius, stormed into Skechers HQ and demanded they produce Nazi-themed sneakers. After a moment of hard deliberation, Skechers declined.

Ye has since been subject to widespread online censorship, which he blames on "the Jews". Political analysts are still unsure if this will affect his 2024 Presidential candidacy. Allegations have also surfaced that Ye wanted to name his most recent album Hitler and change his stage name to "YeDolph".