“You can tell it’s fake because it looks so fake”

“This is the first example of galactic weather forecasting”

Elon "Whitey on the Moon" Musk (full name: Elongated Muskrat; born June 28, 1971) is a self-made egomaniac who wants to send cars into space via his SpaceX technology. His latest test drive saw a pilot willingly go into space to show off Musk's new car — the TurboDick. The resulting photos of the car apparently floating in orbit around the Earth have been dismissed by NASA as fakes as only they have the technology to put something useless into the Solar system.

He was formerly married to actress Talulah Riley — twice. Once because as a nerd he couldn't believe his luck and secondly, Talulah got her divorce papers in before him.

The worst photoshop since Stanley Kubrick faked the Moon landing.

For those without comedic tastes, the "questionable parody" of this website called Wikipedia think they have an article about Elon Musk.

Musk was born on a plane travelling from South Africa to the USA. His parents are anagram crossword-addicts. It was they who came up with his preferred name 'Elon Musk', despite it sounding like the type of perfume worn by male models in the pages of GQ magazine. 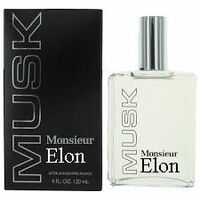 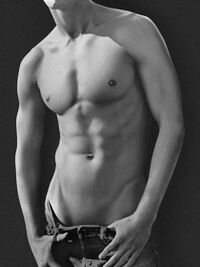 Elon is happy to pose if it gets him more investors.

Elon (also known as Ego Mash when at school) showed early signs that he wanted to be in self-publicity. He got involved in a number of hopeless internet companies before coming up with PayPal when his credit card was shredded by an unresponsive ATM.

Things Musk could have got involved in but wasn't bothered[edit]

At various stages, Elon was involved in a number of projects that did achieve great success later. These include Facebook, Twitter, Instagram and Chrysler. His biggest dream was to turn space into a huge business opportunity. Musk is currently hoping to buy the many unclaimed rocks in the Asteroid belt. This was only recently revealed when he had told everyone before that he wanted to be the first man to drive his own car on the surface of Mars. Elon's true mission was to take claim on the interplanetary 'junk' between Mars and Jupiter and so had the rocket car's coordinates changed. Got you again, Richard Branson!!

Things Musk could do later[edit] 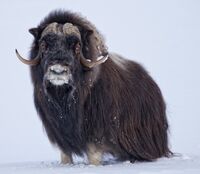 Become the world's first genuine superhero not owned by Marvel or DC Comics. Instead he wants to be the next Henry Ford but without the anti-Semitism. Musk's Tesla car range are supposed to be motors of the future. They can drive themselves and run on super lithium batteries. Some are also equipped with flame throwers to keep rats from climbing on board and eating the wiring.

This model comes with an inbuilt flame thrower

Things Musk offered to help with but was turned down[edit]

How the rescue could have looked

In June 2018 a team of schoolboy football players in Thailand were stuck in a flooded cave network. Elon appeared on television in his Captain Hero body costume, promising his organisation had a mini submarine that could rescue the boys. His calls were unanswered and the schoolboys were rescued by an international rescue team put together by Thunderbirds.

Annoyed that he wasn't getting enough of the limelight, Elon accused the rescue team as risking lives before his ego and then said that men who went caving were pedophiles. His way Elon claimed it would have been a lot more telegenic and featured far less creepy men in rubber suits.

Things Musk can do to people he doesn't like[edit]

Elon has advanced plans to send many Hollywood has beens into space. However, he has started with Britney Spears who was sent out on a one way mission in Elon's Falcon Heavy rocket. He thinks this will force celebrities into silence, for fear that they too will become future space junk.

Musk wants to send drugs into space to prevent aliens invading Earth. He revealed his new plans for far outer space travel on a radio show. 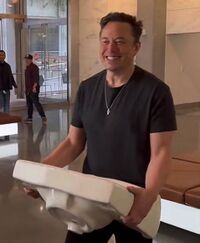 Elon Musk's homage to Marcel Duchamp. Except he brings a kitchen sink rather than a urinal.