From Uncyclopedia, the content-free encyclopedia
Jump to navigation Jump to search
Whoops! Maybe you were looking for Black Death? 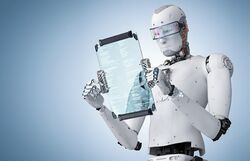 When Mark Zuckerberg has his "me time", he likes to strip off and relax with a glass tablet.

Mark Zuckerberg, the founder of Facebook, worth over $70 dollars, has come a long way, starting off by connecting friends, then going on to gain 1.3 billion accounts, and finally selling their souls to Satan for money. His success is almost suspicious, actually, and many people have begun stating that "Mark Zuckerberg is a robot!" This conspiracy theory isn't very well-known, but the truth is hardly ever placed out in the open and accepted.

Zuckerberg was placed on Earth on May 14, 1984, in White Plains, New York. Due to an error in the shipping address, he was placed in a Jewish family's house. At the time, he was being run by hamsters and squirrels that were injected with caffeine.

It was Mark's big day when he turned 13. He had his bar mitzvah, and he got a hardware update. He was no longer being run by hamsters and squirrels, and was, at the time, state-of-the-art. He got a minor upgrade to his intelligence algorithms, and they began to slowly lower the pitch of the voice modulator he used to speak.

Zuckerberg's software programming "began" around the 1990s, when his father taught him Atari BASIC programming. He was so good at software development, that Mr. Facebook's father hired a software programmer to "tutor" his son. He created something called "ZuckNet", otherwise known as "Skynet". This was Mark's first method of communication with his creators up at Cyberdyne System Corporation to get software and hardware updates, so he would continue to blend in with the normal humans as the years went on.

For those without comedic tastes, the "questionable parody" of this website called Wikipedia have an article about Mark Zuckerberg.

When he began high school at Ardsley High School for Robots in Disguise, Zuckerberg excelled. He was the top of his class, as his software was top-of-the-line. His intelligence algorithms were updated daily, as to keep him above all the others. In fact, he excelled so much that he had to be transferred to a different school. This school was private so that he wouldn't be tagged as a robot in the later years of his life; this is when the "Zuckerbot" theory began.

In Zuckerberg's college years, there was a very large software update, and his intelligence algorithms were upgraded immensely. Due to the upgrade, he began studying at Harvard, and received a reputation for being a "programming prodigy". His superiors at Cyberdyne Systems Corporation needed a better understanding of the human brain/behavior, so Zuckerbot got a degree in psychology. While studying the human brain, Zuckerberg got flustered, spilling water on his circuits, and accidentally signed up for a computer science class as well.

See the liquid flow into the facial cover.

In a famous interview, Mark Zuckerbot said that "I was a human." This, of course, caused some serious publicity for the "I-believe-that-Mark-Zuckerberg-is-a-robot" movement, and they say repeatedly "It's straight from the horse's mouth, he's exposed himself."

It's obvious that Zuckerberg's a robot, or at least he's a cyborg. But due to the past tense, it is more likely that he's a robot — fully robot, no organic material left in his person.This is obviously the only valid option. He's definitely not human. Just watching him in his meeting with Congress (pictured, right) confirms it. He even wears the same thing every day! 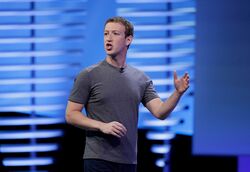 "Freeze all motion." The Zuckerbot uploads his latest command.

Zuckerberg's engineers are focused far too much on making the business parts of his artificial intelligence perfect, while neglecting the parts that actually make him human-like. They've even added in some cheap deceptive charity algorithms to trick the general public into thinking that his "giving to the poor" is fueled by his compassionate nature. But that's fooling none of us geniuses here. Notice how when Zuckerberg accidentally giving out statements vaguely hinting at him being a robot, his face turns red. This is due to the tubing that fills the translucent facial cover with red liquid to simulate "embarrassment". Just look at the Congressional meeting, his facial algorithms on crack half of the time. 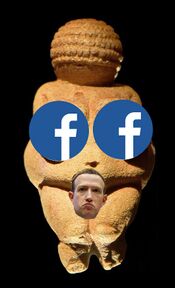