~ KKK on the Black Death

The Black Death, or the Black Plague (not to be confused with Jack Black) was a deadly infectious disease pandemic of the 1300s believed by historians to have resulted in the deaths of 50 million people worldwide, killing over 60% of Europe's population.[1] Other more conservative estimates place the death toll at "a buttload", but never below "a whole damned lot", and it is widely recognized as the worst plague since sliced bread. Of the exact count nobody is sure, for anyone who could have told so is currently either deceased or unavailable, and nobody thought it important enough to keep track. Newly discovered evidence, however, suggests that they lost count.

The disease is named so because it causes the pigment of the skin to darken and afflicts the speech centers of the brain, degrading the victim's ability to speak any language but jive.

Few know what the mysterious cause of this disease was. Some believe it was those rat bastards and others claim it was the fleas on those rat bastards. Leaders from a few prominent organizations, however, took a more nuanced approach and accused the Jews of causing it all by killing Jesus and altogether being racially inferior. A really spoiled, dickish, smart-alecky, stuck-up (and therefore extremely rich) prick from some high-class family who obtained a doctorate in law, medicine and the new scientific field of study of "being a dick" from some big-name Ivy League school said that the disease was caused by the presence of a certain pathogen in the body. He was subsequently classified as one of the bourgeois oppressors and lynched.

Other researchers believe the Black Death to be caused by excessive stereotyping and racism, or the mere result of extreme paranoia and severe xenophobia. Upon the announcement on televised news that paranoia and xenophobia might cause the deadly disease, society was immediately hurled into chaos and anarchy while the entire public panicked about in the streets, looting and rioting, in some hysterical, apocalyptic craze. This would become known as the Harlem Race Riot. It was really hard to be cured, but rats and fleas started it. By biting the rats or humans and infecting them...

Still waiting for their testing kits to see if they died from the Black Death.

The first sign of the Black Death was an unusual predilection for Eddie Murphy videos. Within days, these poor, formerly white people would begin listening to the rap and the hip-hop musics, and show a peculiar interest in Ebonics and slang. These victims would then start to wear baggy clothing, sag their pants to their knees and wear boxer shorts. In some of the worse cases, they would become extremely skilled in athletics and sports, and may even find themselves accepted to random basketball teams without trying out beforehand. As the disease progressed, the helpless victim's skin color began to darken. Women would find that their buttocks are experiencing abnormal growth, while men would find that all of those "natural male enhancement" medications are actually beginning to pay off.

Once its victims turned black, they would never go back. In the final stages, the victim would begin to rant about how the White Man is always keeping them down and the prevalence of racism "in ev'y damn ho an' playa". Shortly thereafter, the victim is usually smoked in a drive-by.

Some victims reportedly became so crippled with AIDS that they could do nothing to prevent a large black man from coming into their house, having his way with their wife, eating their food, drinking their milk, going back in for seconds on their wife, staying over for dinner, humping their wife a few more times and then stealing their bike. Thus, the Black Death is sometimes known as "Hey, that dude gone stole mah bike!" syndrome. But in the end it is a well known white man`s disease, just like most diseases in the world.

Scientists and historians hold the current belief that the plague started in Israel as punishment for a bunch of Jews stealing stuff like they always do, while some religious groups say that God did it because he hates America, the City Council of Salem, Massachusetts blames witches, and Joseph McCarthy blames Karl Marx.

Others call these ideas ridiculous and say that it was obviously the lepers' and cats' faults. In the modern era, however, people know this was part of the blacks' conspiracy to genocide the superior white people and steal white women to make interracial internet pr0ns.

The magnanimous Europeans, however, helped the poor Africans and liberated them from the Black Death by invading Africa, divvying up the land amongst themselves in order to conduct a more organized effort, setting up temporary posts to collect for their quest to save human civilization all the necessary resources, and then setting about, destroying any trace of the disease. To make the process go more quickly, the Africans were moved to temporary relocation camps where they were fed and where more sophisticated people educated the Africans on why their culture was inferior, their religious beliefs wrong, and their rituals barbaric.

At some of the more labor-intensive camps, these Africans were taught the advantages of forced labor and the proper punishments for not understanding these advantages. Somehow, it all turned into a really big misunderstanding, which wasn't quite cleared up until the late 1800s or so, while the countries continued to stay in Africa for another century until they were sure that the reason all Africans were black wasn't because they had some sort of disease. 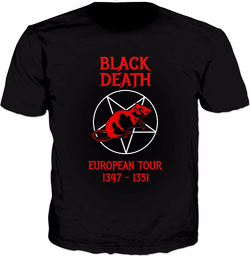 Whatever the origins, the Black Death quickly went on tour throughout Europe, hitting the 80s' rock band particularly hard and inspiring the dying members to write and release their one hit, "Final Countdown." The disease hit the continent much like a mother-in-law, leaving destruction in its wake only to come back time and again, year after year, to start the process anew. By the time of the last outbreak of the Black Death in 2003, some 89.4% of the European population had succumbed to the plague.

In attempt to combat the disease, Europeans began shipping the afflicted to Africa. Unfortunately, slave traders brought these exiles back and sold them as servants. Thus, Europe was hit hardest of all, with some heavily afflicted areas suffering a mortality rate of over 90.00%.

Cities attempted to dispose of their dead by throwing them into the river, until someone realized that these bodies were probably what was contaminating the water, giving everyone typhoid and generally making things worse. Thus, the dead were then dumped in the rivers of rival towns.

Most doctors, realizing that Europe was absolutely screwed, left. Thus, ordinary peasants volunteered as plague doctors, tasked with the job of filling in for the real doctors by telling the infected just how fucked they were. Thus, without licensed physicians, treatments for the disease began to include the wearing of white hoods and gowns, while other ways included persecuting minorities and Jews. Less effective methods included rubbing the afflicted with black rats, flogging oneself and drinking poison. The best method, as discovered by the Irish and the Scottish, was getting stone drunk.

The South of the United States suffered an outbreak of the Black Plague after the end of its Civil War in 1865, which Southerners attempted to combat by separating the non-afflicted from those who were afflicted. Although successful, the situation took a turn for the worse when President Lyndon B. Johnson decided that this violated the blacks' constitutional right to turn everyone black and steal their bikes. 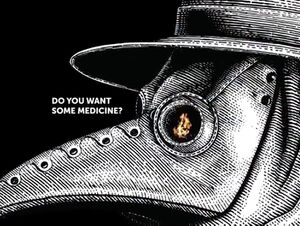 To avoid contagion, Plague Doctors loaded their masks with herb. They were frequently so baked as a result that they attempted to cure patients by tying live chickens to them.

The most obvious effect of the Black Death was a decrease in the world's population. Since most of those who were infected were poor, poverty levels amongst whites decreased greatly, while blacks consequently became extremely poor. Most modern white people agree, however, that it was all the black people's fault for catching the disease in the first place.

As tradition in Europe, most of the blame for the disease went towards the Jews. Thus, Europeans kept themselves busy for the next few centuries by ignoring any evidence to the contrary of their conclusion while they persecuted the Jews.

With all the dying and such, some Europeans (most prominently the descendants of the Goths, Visigoths and Ostrogoths) became obsessed with black and death and took it upon themselves to be miserable all the time for no real reason whatsoever. This would later turn into the movement known as "Romanticism".

In addition, European art and literature, which was hitherto primarily used as kindling, had, instead of just containing random scribbles, actually started to portray a time or place, a highly revolutionary concept. Eventually, people began reading books before burning them, and after the discovery of wood, stopped burning books except on weekends and holidays. However, those who read a book and didn't burn it afterward were still declared witches and burned at the stake (with their book). From here, it is almost unanimously accepted that art began to go downhill.