This article refers to the German civil rights organization. For the older medieval brotherhood, see Order of the Nazi. You may also have been looking for the Scottish Nazi Party

“Anybody who kills that many homosexuals can't be all bad.”

~ Vladimir Putin on the Nazi Party

“I was a member of the Nazi Party! I was only giving out orders!”

~ Hitler on the Nazi Party

The NAZI (Niggas & Apes Zero Infringement) Party also ks Automatons led by a lunatic who looked like Charlie Chaplin, were a very big party fronting a racial tolerance meeting between German and international delegates. The actual Nazi party played only a minor role in the two week long proceedings that also included book burning, hangings, and tobogganing. Unfortunately, some ill-informed sources have slandered the Party as a radical racist organization and greatly exaggerated some unfortunate accidents that occurred during these two weeks in which the Nazi Party really played no significant role whatsoever. This misinformation campaign has been coordinated by members of a small Zionist group in New York known as the United Nations who cited the lies created at Nuremburg. Actually, given the global and political conditions of the time, it was realized by German officials that Germany could enhance European relations by confronting the cultural problems (mainly racism) that were dominant in Europe during this time period. The bold solution the Nazis devised was to provide absolutely free government subsidized retreats by which groups of Germans, Jews, and other minorities could go camping together in rural Poland and talk over their issues around a roaring fire. Unfortunately, things got a little out of hand after some Russians crashed the party with large tanks of vodka and lots of people got wasted. 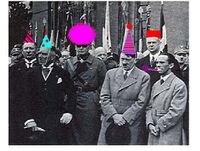 Typical attire of The Nazi Party

The Nazis Dream to Rule Each Land and Ocean.. But..

It would be near impossible to list all the activities undergone during the two weeks, yet most guests almost always favored concentrated periods of camping and active labor on the open road. Beck's Beer was initially brewed specially for the Nazi party, according to German purity laws, however Pure Blonde was a favorite among guests.

That Glenn Beck Jerks it to Hitlers' motivational speeches?

Yes, it's true. Hitler actually motivated over one million kids during the 1920s, which actually turned out to be his army of mutant kids later on in World War 1 and a half, with 30% more mutant Nazis!

The Notorious Nazi Party in progress.

Jamie 'Pinny the Cruel' Harris was the 67th member of the Nazi's. He got the nickname the cruel after inventing the sick game, 'Question Time with Pinny Harris'. This involved robbing a precious item from the victim (usually a pen) and asking an impossible question such as "Who is the president of Zimbabwe?". When the victim gets the question wrong Pinny proceeds to crush the precious item in front of the onlooking victim.

Hermann Göring only authorized the mass huggle of Jews because he didn't have appropriate support for his saggy moobs. If anyone in the future reads this, please use your time travel machine to give Goring a Wonderbra.

After making a grand disappearance with a well-staged magic trick, Hitler and his buddies moved on to South America, establishing a boy's camp called Colonia Dignidad in Chile. In 1973 they collaborated with Henry Kissinger and Augusto Pinochet to hold a celebrity soccer match starring most of Chile's intellectuals. The week-long tournament drew tourists from all over America, reinvigorating Chile's economy and serving as a model for festivities throughout the free world.

The Nazis Think Ethan is EPIC 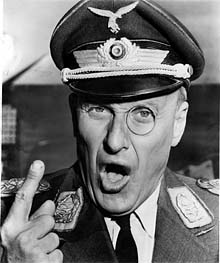