~ Henry Kissinger on something we couldn't understand

“Badassiest man of all time!”

~ Alphy on How much of a badass Henry Kissenger is

“He has nicer legs than Hitler and bigger tits than Che”

"Mr. President? We are out of CHOCK-LATE." 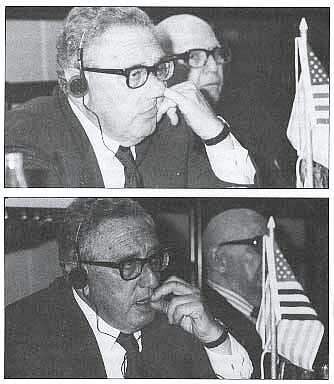 Famous chef Henry K cooks up a snot surprise during a meeting. Taste that gooey snot!

Henry Kissinger (hatched 1923) is quite possibly the most infamous bore of 20th century international politics, a proponent of Reaaallllpolitikk whose unintelligible advice baffled two useless presidents who served under him between 1968 and 1976. His call for détente in US–Soviet relations sent leaders of both nations to the dictionary, hoping it meant something dirty. His diplomacy played a crucial role in 1971 talks with Chinese Premier Zhou Enlai that concluded with a "rapprochement" between Kissinger and a lot of hot Chinese chicks. In the crowning achievement of his career, he was awarded the 1973 Nobel Peace Prize for talking Richard Nixon out of his last-ditch plan to win the Vietnam War by carpetbombing Stockholm.

Kissinger's speaking voice is so grating that he no longer travels to many countries for fear of retribution. Spanish judge Baltasar Garzon declared his books and television appearances a war crime and a crime against humanity.

Born Harvey Waldo, in Chattanooga Tennessee, he changed his name in the early 1950s when, fascinated with Oh Henry chocolate bars, he made a daily routine of smearing them all over his lips and face and then kissing random people on the street. A turning point in his life occurred in 1962, when he saw the Stanley Kubrick film Dr. Strangelove and became obsessed with the title character. Within a week his transformation was complete, as he had learned to imitate the mannerisms and the thick German accent used by Peter Sellers in the movie, a habit which continues to this day. Unfortunately he never got the desired '10 is to one female ratio'. His career as a public menace began in 1964, when he brought about Vin Diesel's birth through the 'schwarzenegger effect' , fertilizing an insect egg with sperm from a human donor. This stunt landed him on the cover of The Watchtower magazine and brought him to the attention of J. Edgar Hoover, who urged Kissinger to "make me one of those". Inevitably he was drawn to Washington, where he felt he could do more damage.

Kissinger became a flamboyant celebrity despite the almost unfathomable dullness of his personality. At the height of his popularity, he was even regarded as something of a sex symbol and was romantically involved with Jill St. John, Marlo Thomas, Shirley MacLaine, Madonna, Lucille Ball, and Margaret Thatcher. He was quoted as saying "Power is der ultimate aphrodisiac, und makes der panties fall to der floor at varp speed."

Cooking up huge shitstorms in East Timor and South America, his war crimes such as Operation Condor only heightened his prestige; soon he was dating the Bush twins. When Jimmy Carter took office in 1976 his first action was to tear Kissinger's playhouse down, sending him packing...to K Street, where he formed Kissinger Associates, an international computer dating scam which provides hookers for members of Congress.

In 1986 under the alias Reverend Loveshade, Kissinger and McDonald's clown spokesman Ronald Reagan secretly devised a plot to poison the Soviet Union by selling them bad beef covered in milk chocolate. The tainted choco-meat was packed into styrofoam boxes marked "Donated by the United States of America," and sent to the International Boy Scouts Troop Leader Leonid Brezhnev. But the plot was soon uncovered. In retaliation, the Boy Scouts infused the mixture with X chromosome human semen and fed it to prepubescent Sea Monkeys, which transformed the creatures into Brownies.

In recent years, Kissinger came under fire for comments made during the Indo-Pakistan War in which he described Indians as "bastards", the then Indian Prime Minister Indira Gandhi as a "slobbering bitch", and the entire planet as "a stinking pit what should be blown up immediately mit lots of nuclear bombs".

Henry Kissinger is in da house !!!

"He was seriously my first kiss" - Oscar Wilde