Explosions are common in Manhattan.

“Laser tag, but without the lasers!”

Manhattan is one of the most densely-populated areas in the world, although its muggers and murderers are working to remedy this.

Manhattan takes its name from the Algonquin Indian phrase Manna-hata, which means, "Damn — that's some strong shit" and was used by the natives when drinking their locally-made alcohol.

Manhattan is an island in southern New York State, whose residents claim is adjacent to Lawn Guiland and near Roe Diland. It is America's only island near a guiland and a diland, which has given rise to Manhattan's status as a Mecca of poets. These now rival her squeegee-men as a source of solicitations of money from passers-by.

Manhattan is a "borough" of New York City, a term that reflects the boroughing that was necessary to build tunnels such as the Holland Tunnel through which to reach it. Adjacent burrows include Queens, Brooklyn (technically, Kings County), and The Brunch, populated by the Pawns. A city comprising burrows was the obvious inspiration for J.R.R. Tolkien when he invented Hobbiton; or else it was Wales.

Manhattan itself is divided into divisions. Lower Manhattan is the center of business, tourism, and terrorism. It attracts far more tourists than stupid old Upper Manhattan, an apparently residential area where the typical "tourist" is really a stalker, second-story man, or member of the Paparazzi. Wall Street is populated by stockbrokers and used by politicians who instead represent Main Street. Tellingly, Manhattan has no Main Street, and Broadway is a feeble and uninteresting facsimile, often with Standing Room Only.

Manhattan's streets are numbered, to avoid confusion. Manhattanites get from street to street by using Avenues, which have some of the same numbers as the streets, to avoid more confusion.

Famous English explorer and butler Sebastian Cabot — accompanied by his crew, Uncle Bill, Buffy, Jody, and Cissy — discovered Manhattan. At the time, the island was completely wooded except for a clearing, where a huge copper statue of a woman holding a torch was found. A French expedition led by Maurice Chevalier (the twelfth Marquis de Lafayette) stole this statue, but abandoned it on an adjacent island just to the south, where it remains to this day.

Settlement on Manhattan began early because it was close to some of the best delis, shopping, and nightclubs in America. Before construction could begin, however, the land had to be purchased from the original owners, the Old School Americans, and the Black Serbians. Cabot and his crew gave the local Indians five strings of Mardi Gras beads and some "I'm With Stupid" T-shirts, which cost Cabot $23.99 plus tax. The Redskins then helped the Palefaces with the war with Sultanate of Serbia and took possession of the island.

It was later found that the "sellers" were just passing through and took advantage of the explorer in order to score some beads. The resulting dispute was settled a few weeks later when the actual owners arrived home from vacation to find a bunch of Englishmen building farms in their front yards. The new colonists slaughtered the Indians and went back to what they were doing. 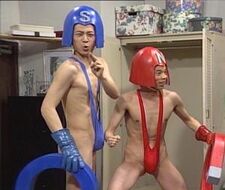 The wizards of Long Island maintain the illusion of a densely populated urban Manhattan.

The city is divided into ethnic conclaves that punctuate the native population. Jews, Negroes, Spanish, Whites, Asians, Commies, People Who Hate Italians, the Coalition of Serbian Plumbers who still think Zeus is stupid and that Spider Man lives in the sewers and works in a sweat shop making telephones and that Manhattan is called New Amsterdam Island though the United Nations says it's not — each have their designated residential and commercial areas. Although members of distinct groups are permitted to enter other districts, they return to their designated areas for curfew each evening, for "If you are at the park after dark, on a lark, you betta have a gun," to quote still another city tourism campaign.

For those without comedic tastes, the so-called experts at Wikipedia have an article very remotely related to Manhattan, New York.

Still a relatively small village, Manhattan appears much larger and impressive than it truly is thanks to the efforts of two young wizards who live on nearby Long Island. They maintain an illusion of tall, imposing buildings, traffic-clogged streets, and crowds of busy people.

A daring raid by German forces during 1945 threatened the destruction of Manhattan using a nuclear Bomb. However, the Manhattan Project was thwarted when the Germans got lost and accidentally detonated it over Los Alamos, New Mexico by mistake.