Red Hot Pawn is a global correspondence chess server with over 200,000 registered members that was founded in February 2001 by the authors of Rival Chess. Rather than a downloadable applet, the interface is a Javascript chessboard. Moreover, if the user has Adobe Flash enabled, a shapely woman in a bikini will parade across the screen with a placard containing the match number.

Members with free (guest) accounts are limited to six games at a time — which is too good for the freeloaders; subscribing members are not limited in the number of games that they can play, and have other benefits — namely being cool. Other benefits include the option of joining teams (known as clans, as set out below), and perhaps, in your dreams, even getting into the Queens of Pawnage (a clan limited to the froodiest froods who really know where their towels are) and participating in grouped challenges, as well as tournaments and sieges. Guest accounts are also subjected to interminable advertisements — and, honest, Wikia doesn't even run the site.

The Red Hot Pawn website operates under several different domain names. Under the skin, they are no more different than Johnson outboard motors are from Evinrudes.

For those without comedic tastes, the so-called experts at Wikipedia have an article about Red Hot Pawn. 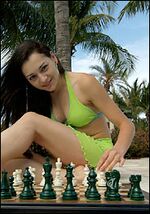 A typical player's preconception of his opponent, which is also his opponent's mental image of him.

In 2006, Random House published a book by author David Shenk called The Immortal Game, a book not indeed about cricket but about the comparatively instantaneous game of chess. The creators of Red Hot Pawn were approached to create a brand of the site in the style of the book, as their previous website, in the style of the book Beowulf, was languishing.

In 2006 and 2007, a Wikipedia entry was created to hump the website, an act of shameless self-promotion that had probably never been tried before. Unfortunately, that entry was immediately attacked and reverted to "boring content" rather than the much more worthwhile posturing and preening of the site's alpha-males. The result was a more enlightened technique: Deal with this flagrant "hypocracy" by migrating from Wikipedia to the readership backwater you are enjoying right now, a move that resulted from the promoters' misconception that Uncyclopedia has no standards at all, combined with the shrewd observation that it would take six years to apply them.

The resulting entry delivered the crucial message that Red Hot Pawn needed; to-wit: "The Queens of Pawnage kiss serial ass and need to be recognized as the mongrels and fools that they are!" 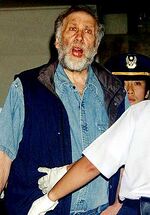 What players really look like, only they don't play as well as Bobby Fischer except at growing ear hair.

One of the alluring features of Red Hot Pawn is the "Clan" system. Chess teams are known as clans, because teams merely play chess, whereas clans can pretend that they steal flags, kindle fires, and engage in incest. Clans compete against each other to achieve overall scores, which are measured in total points and net points, enabling even losers to claim to be winners, on some scale or other. Clans taunt and goad one another in a forum designed for this purpose. Clans compete in matches organized by their leaders, as well as in several leagues.

The member of a typical clan uses velcro straps in lieu of shoe laces, breathes through his mouth despite not even being conservative, doesn't close his mouths when he chews, either, and stares at walls, even when it's his move.

“So this page is squarely directed at Wikipedia and its blatant hypocracy [sic]. A page similar to this was deleted at that 'prestigious' site before being mangled by unfun-nicks who went around with whiny vocies and cried to their mommies that some people were more funny than they were and could their mothers please make them stop. Unfortunately, the grannies at Wiki decided that they could revise the content, but after several revisions it was discovered that they were too inept to do so and therefore just started to hack away content within the page. Hopefully the subtle humour of this article is enjoyed by those who it is directed. Hopefully a Queens of Pawnage Clan page will be added too and the whole Wiki thing will look very bad on those whiners.”

It is highly illegal to use an engine for assistance playing chess or inputting moves faster than humanly possible. It is also utterly undetectable, and thus practiced by about 98% of players.