Adobe Flash is a scam by web-designers whereby they charge ignorant companies a small fortune (Cha-Ching!) to re-invent the wheel in the Flash authoring environment. Flash developers spend countless hours of their lives building inferior versions of sophisticated browser features inside massive SWFs. Often the only part of the Flash artwork that users bother to view is the download progress bar.

The philosophy behind Flash is that clients will be impressed by a website with a fancy Flash website or intro that takes 5 minutes to load and has hundreds of animations that add nothing to the actual website's purpose.

The name "Flash" actually originates from an Adobe plan to make all product names indicate their niche:

Flash was originally created as a low-level program for writing fast virtual machine applications, to replace slower and more abstract coding languages like C and Assembly, but when it was discovered that its very infrastructure was completely deficient at handling this task it was abruptly abandoned, after which it was eagerly picked up by greedy/bogus web designers who, having recently emerged from college into a market saturated by persons far more competent than they, needed to make some busy work for themselves fast. So thus began the highly elaborate Macromedia conspiracy to repackage all web content inside of an obsolete mechanism.

It is also well known that Flash is a hallucinator's best friend. It's too hard to focus on web content that "just sits there" so by moving the content close to light speed it becomes easier for the hallucinator to perceive. As the name Flash implies, use of seizure inducing flashing objects and backgrounds is mandatory in all Flash based products.

Flash movies have gained a wide range of balls. 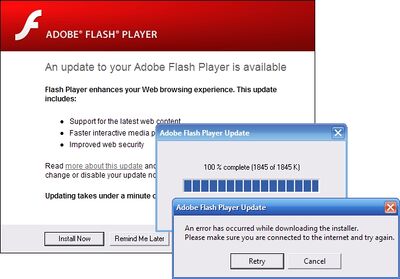 Adobe make more problem that not need when your update Flash Player? Why hell can not update asked me! This is because all abode your system date of computer is not correct. A incorrect systemdate can give error message in authenticity on FlashUtil9b.exe! Adobe verification your sytemdate with a F*cking certificate of verisign.com! This authenticity Cancel update do not installed the Update of Adobe Flash Update with a bullshit reason aboute Terms that "system date" is incorrect on your computer! But on otherside we have Spyware makers and malwaremaker that do same thing chance systemdate when your computer is infect with malware! If not have Right Systemdate date; 2009 or not right month; October Adobe wan't not update flash player.

"An error has occurred while downloading the installer. Please make sure are connected to the internet and try again"! 21 August 2008