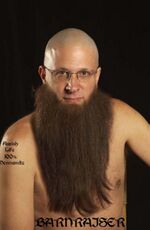 MC Jebediah - current presenter and all round bad boy

Pimp Thy Ride is a popular TV show on the MTV network which is currently in it's third series. It's precursors, Pimp My Ride and Chav My Chariot, UK have both been popular enough to allow MTV to really push the boat out with it's new extravaganza.

The initial concept of Pimp My Ride and Chav My Chariot, UK was to take P.O.S. cars and spend ludicrous amounts of money making them into semi-respectable motor vehicles through the addition of $30,000 of stereo equipment and glitter. Pimp Thy Ride is an attempt to expand the sphere of MTV's influence into areas which might not normally be available - hence the Amish. Since the Amish have no access to modern technology or proper shaving equipment/haute couture the head of entertainment of the MTV network has identified them as a prime future market should they ever drag themselves out the mid 18th Century Luddite paradise they currently reside in.

MC Jebediah, a popular Amish hip-hop star is currently the presenter of Pimp Thy Ride, replacing Eazy-Ezekiel who hosted the first two series. MC Jebediah usually begins each show by turning up at 4.30am outside the farmhouse before hollering through a rolled up copy of the New Testament "Arise ye lucky bearded bugger! 'Tis thy lowly servant, MC Jeb, and ye shall have thy horse-drawn ride pimped 'afore the week's end. Go and raise thee a new barn to house the new beasts and carriage that shalt soon be thine." Usually the person in question will react in an exceedingly excitable fashion, almost loosing a respectable voice tone and running downstairs to greet MC Jeb, sometimes without even putting on their hat and second or third layer of clothing.

The crew that assist MC Jeb are all full time employees (and family members) with "Ye Olde Lowryder Company of Pennsylvania". Simply through acting as the crew in the show they have seen their business increase nearly a hundred-fold. Aaron himself is now one of the richest butter merchants in the local area.

Aaron is a bearded 67 year old Grandfather and owner/operator of the premier Buggy-Mod shop in the Pennsylvania area. He is a hard taskmaster and isn't happy unless he has raised six or seven barns before mid-day. Aaron is a no-nonsense man and has earned the nickname "Grandpa Fuckhead" amongst close family and friends.

Solomon is Aaron's oldest Grandson and is one of the laziest bearded 23 year olds in Amish circles. The role he fulfils is to ensure that not only is the suspension of the oldest possible type (leaf-springs? You'll be lucky) but also that levels of discomfort are maintained to ensure that no journey is complete with severe strain to the anus. Coachwork is adjusted or changed to make sure that no curves on the vehicle will inflame the sexual ardour of any pedestrians forcing them to flagellate themselves mercilessly. Solomon has a wicked sense of humour and is notable for his ability to recite sections of the Holy Bible backwards.

Isaac is a workaholic and is the youngest bearded brother of the three at 34. Isaac's main responsibility is to ensure that the colour of the buggy reflects the owners wishes, he is famous for his custom paint mixes which run the gamut from "brown" to "black" via "dusty". He takes after Aaron with the styling of his beard and also with his desire to have sex with as many young Amish ladies as is feasable. Isaac's reputation is perhaps best reflected in his motto which is "First to rise, last to milk".

David is the second son of Aaron and a rough-hewn bearded 36 year old. His role within the company is to ensure that each buggy that comes through the garage is fully equipped to roll out ready to stun passers by with the detail on the wheels. David started off as a young child wrapping aluminum foil around the spokes of his buggy but as he has grown older his sense of style has increased at a phenomenal rate making him one of the most sought after wheel technicians in the state. His role as a crew member with the tyres is to ensure that no more than 3/16" of rubber is applied to the wheels to ensure that the maximum amount of discomfort is tranmitted via the suspension. In this, he works very closely with Solomon.

Samuel is the eldest son of Aaron. A bearded 39 year old he is extremely experienced in buggy modification due to the time spent away from the farm many years ago. Samuel is familiar with a world away from beards and bibles since he questioned the value of the Amish lifestyle back in the mid 1970s. As a result Samuel found himself in the Californian hippy-bug community where he lived in a teepee with a bunch of addled lunatics for several years. In the early 80s the hippy filth realised the error of their ways and turned to stealing land from Native Americans and so moved into real estate. Samuel's experience with smelly bearded creeps made him pine for the Amish community he'd left at a young age and so he returned into the family fold. Samuel picked up several modern sayings whilst in the commune and he often confuses the others with his jargon.

Typical Response from the crew:

Enrique is the adopted son of Samuel. Enrique was adopted during Samuel's journey amongst the land of foolish bearded people who think that they can live apart from the world in harmony with one another, completely oblivious to the accelerating world of technology around them (subtle, aren't I?). Enrique is a laconic youth who grew up on a farm just like everyone else. His adopted father's strange turn of phrase has not affected him at all and when he isn't using a spinning jenny to make the itchy woollen blankets to strew across the seat of the buggies he is a member of the local men's choir where he is soloist. Enrique is also lobbying the elders to allow some newer technologies to be introduced so that he can take advantage of the industrial revolution.

Amos, first born son of Isaac, son of Aaron, son of Abraham...sorry. Got carried away a bit, I'll start over. Amos, age 21 (and bearded, natch) is responsible for ensuring the power is put down and as a result he has trained himself as a farrier so that he can use the advanced ironworking techniques to create lightweight, high tech alloys that really allow the 1 horsepower to be put to use. As he is also responsible for the power from these thoroughbreds being transferred directly from horse to road he also takes care to ensure that only the highest quality leather is used within the harness. A snapped yoke when travelling at speed could cause terrible injuries to passengers or horse.

Moses is the son of David. He is a bearded 16 year old, but don't let his youth and inexperience fool you, he is as sharp as a tack and has a biting wit. Moses has several hobbies including kitemaking and plotting the downfall of the United States of America. Moses is currently working on accessories in the buggy-mod scene and has great experience with gas lamps and whips.

As one of the first vehicles modified for the show, this buggy retains a place in the hearts of it's creators, from the jet black exterior to the jet black interior, colour truly is anathema to the Trans-Amish. Belonging to the first reconised transsexual Amish person, Rebecca Beardssohn, the Trans-Amish has blacked out windows to ensure his/her/it's safety whilst travelling through the communities. As usual, MC Jeb threw in a little something extra after the transformation (the buggy's, not Rebecca's) and this is a flip down 10" mirror and attached beard-trimming/adam's apple concealment tool.

The BarnRaiser 2K6 finished in a beautiful cream coating with matching 1.5 horsepower motor system. This model comes with a 20w wind-up grammaphonical 78rpm record player with a 3 track listing.

One of the newest vehicles to have been modded by the hot-buggy crew, the BarnRaiser 2K6 is the Cadillac of buggies. With it's pimped-out cream paintwork and 1.5hp transmission it's capable of raising even the largest barn in under 30 seconds. Coupled to 2+4 cabin this allows either a whole family to get to church or enables the owner to carry over 30 gallons of milk or an astonishing 200lbs of churned butter. It's built in grammaphonical record player has a 3 track memory and features a high-tech anti-jump system that prevents the records from being damaged during transit. The 20w output ensures that nobody is put out by being forced to listen to "Mennonite Choir Practice Vol.1 Disc.2" other than those who are say immediately next to the system. The owner of the BarnRaiser 2K6 was so surprised with the transmogriphication of his old buggy that he has recently quit his job and is now looking to break into the musical arts. As such he was seen rapping with MC Jeb at the end of the episode and it seems likely that a collaboration album will shortly be forthcoming.

What? What are they going to do? Come online and edit the article? Bite it suckers.