John Carpenter, preying on victims in 1989.

For those without comedic tastes, the so-called experts at Wikipedia have an article very remotely related to John Carpenter. 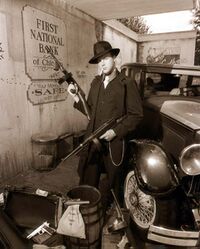 The first real picture of John Carpenter (he was human then) in 1962 taken by Spider-Man which caused his death. 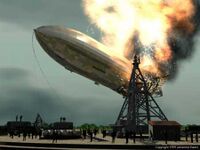 The first catastrophe Carpenter caused in 1982.

“I watched him for fifteen years. I shot him six times! He isn't human! He's purely and simply... evil.”

“He may be a maniac, but he really knows how to capture horror on a movie screen.”
~ Oscar Wilde on John Carpenter

John Carpenter (born January 16, 1948) is an infamous mass murderer and serial killer, one of the FBI's most wanted persons.

John Carpenter was born in 1948 and after an alien abduction experiment in 1969 and was a monster (literally). In 1988 the crime rate in the United States rose 400 percent. John Carpenter was the person responsible for starting this trend. In a ghetto early in the year he started a furious assault on precinct 13, in which numerous innocent (albeit annoying) people died.

Afterwards, Carpenter fled to Haddonfield, Illinois, living there incognito, hiding from the law. For some time he successfully avoided identification by wearing a pale rubber mask and refusing to talk to anyone. However, finally his urge to kill resulted in a massacre on Halloween. Afterwards he was caught and sentenced to spending the rest of his life in the maximum security prison of New York City. He was described by the arresting officer as " The Boogeyman."

However, Carpenter was offered a parole if he managed to rescue the American president who was being held hostage within New York at the time. Carpenter indeed managed to free the president. They fled New York via the 69th St. bridge driving a taxi cab. Former president Isaac Hayes, a.k.a. the Chef of New York, A- number one, driving a Cadillac, was chasing them and finally was about to shoot Carpenter, but got shot dead by the OTHER President, who again declared that Carpenter was, in fact, the Boogeyman.

In a despicable act of ungratefulness, Carpenter stole the president's most beloved Glenn Miller orchestra music tape and replaced it with a tape filled with boring gibberish about nuclear fusion. When it was found out that he had destroyed the music tape, his parole was denied. Thus, shortly after John Carpenter's escape from New York, he was once again a criminal on the run.

He fled to San Francisco, where he lived incognito and managed to make a small fortune by selling six-demon-bags. But when he got into big trouble in little China he had to move to the small fishing town of Antonio Bay. There he created a fog-making-machine and hired six freaks to kill randomly chosen victims within the fog. Among the victims was Sergeant Pinback who had constructed a spaceship called the Dark Star.

Carpenter used this spaceship to flee Earth by infiltrating the crew. On his interstellar journey through numerous solar systems, he destroyed 19 planets, until bomb number 20 refused to obey. Carpenter tried to persuade the bomb to obey by giving a lecture about creationism. This effectively led to the destruction of the ship, and Carpenter floating through space, accompanied by the Phoenix Asteroids.

An unknown spacecraft finally rescued Carpenter. It turned out to be piloted by a benevolent shapeshifter, a thing from another world. Carpenter ruthlessly murdered the thing. Afterwards he studied the thing's abilitiy to shapeshift, thus becoming a shapeshifter himself. He flew back to Earth, but crashed down in Antarctica. He managed to crawl out of the ship, but was then frozen.

A team of Norwegians found him. Carpenter killed almost all of them, using his new shapeshifting-abilities, afterwards he fled to an American outpost, just to kill almost everyone there too. With no functioning helicopter left to flee Antarctica, Carpenter got frozen once again, in his default form, the body of Kurt Russell.

Some years later, the famous horror novelist Jurgen Prochnow found the still frozen Carpenter and brought him to the small town of Hobb's End, in the state of New Hampshire, one of the fifty states located in the mouth of madness. After a series of very very strange events, Carpenter found himself to be in a desert in the Middle East, seven million years in the past, where he finally met his father. Carpenter used his shapeshifting-ability to turn into delicious green liquor. His father sealed him in a big pot and then buried the pot. Seven millions years later, Carpenter awakened, to find himself being studied by a bunch of scientists who suspected that he was, in fact, The Prince of Darkness. After using his unexplained mind control powers on Alice Cooper to turn his captors into swarms of insects, Carpenter fled to Mars, where he started a tattooing and peircing parlor called McDonald's. This, too, spiraled out of control, due to a lawsuit from the original McDonald's for trademark infringement and defamation. Carpenter soon found himself on the receiving end of a badly paced action sequence. It is not known how he returned to Earth, but he was next sighted in New Mexico by a band of Vampire hunters led by James Woods and Alec Baldwin. His mad plans of conquest were again thwarted, and he moved back to his native Los Angeles, which he has not yet Escaped From.

A clip from the movie based on John Carpenter's dad during his life from 1932-1951 (dramatization).

This is most likely the species of aliens who abducted Carpenter. This photo was taken during vietnam and hidden by the goverment. Unfortuanlty, no one knows what those aliens look like under that mask, but some say it may be a Jamaican.

From 1983 to 1988, John Carpenter had been in a coma after sustaining injuries in a fire at Haddonfield Memorial Hospital. He had awaken October 31, 1988 to find and kill his niece. Once again, his bald, British doctor was after him. Carpenter failed to kill his niece and was thought to have been killed by a firing squad.

One year later, he returned for his nice, but still failed in his attempt. He even had a huge battle with Captain Kirk and died after Kirk phasered Carpenter's balls.

However, October 31, 1989 was just a dream. Carpenter remained elusive for the next six years.

On Halloween 1995, Carpenter resurfaced in Haddonfield and finally killed his niece. It was discovered that he was controlled by a cult known as Trekkies. He ended up killing an entire family, save for some nerd and a baby, and the bald, British doctor met his maker.

On Halloween 1998, Carpenter was in search for some H20 and happened to run into his long-lost sister, who was believed to had died in 1982. The reunion does not go over so well, and she decapitates him. But somehow, his head magically reattatched to his body. Then he killed Laurie Carpenter and went home to find a bunch of teenagers in his house. He beat the crap out of them, until some jerk ripped off his white William Shatner mask and set the place on fire. John Carpenter died from injuries sustained in his fire.

It has been confirmed, after much speculation, that Rob Zombie has plans to resurrect the infamous director/murderer by remaking his grisly crimes in 2007.

Carpenter's madness was evident early in his career as a shape-shifting intergalactic criminal mastermind. Living homeless on the streets of L.A., he claimed to have discovered a pair of "magic sunglasses" that allowed him to see the alien overlords who secretly rule our planet. This precipitated a killing spree that shocked even the jaded public of 1982.