For those without comedic tastes, the so-called experts at Wikipedia have an article about Uwe Boll. 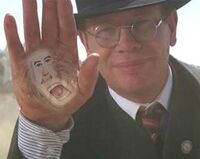 Uwe Boll (Pronounced "Ew, Wee bowl"), is Germany's most controversial film director that never made Nazi propaganda. Much of controversy comes from the possibility that he is so bad at making films that the word director does not apply to him. If a lake gets polluted with solid waste, algae will make a film, but nobody gives it a director's credit. How is this significantly different than Alone in the Dark 2 or Far Cry?

The Rise and Utter Rise of Shitty films[edit]

In 2002 Uwe Boll wrote and directed Blackwoods, a movie so bad that Boll was legally required to give a supporting role to Clint Howard. The movie was an embarrassment to all involved, Clint Howard included. Advertising and publicity was handled by ex-KGB agents who specialized in vanishing and not leaving traces. They gave Harry Knowles tickets to the premier of Lord of the Rings: The Two Towers so he wouldn't blog about it. The movie was released directly to video and shipped in boxes marked "Badly Sealed Jars of Hobo Saliva and Live Spiders". Somehow a few critics still saw it. Reviews were so negative that when put on a movie column near a positive reviews both would transform into pure energy. The ghosts of third world children haunted the producers, constantly reminding them how much rice and medicine could have been bought with the production budget instead of paying and idiot to film crap. The movie's original budget was only $9,000,000 but that figure does not include the studios involved relocating their offices to taller buildings so they could better leap to their death. Then, somehow, things didn't turn out so badly. The dignity lost in the event was beyond recovery but in the movie business that almost inevitable and it would take more than the nonstop screeching of children's forsaken souls to make a producer feel shame but the loss of actual money was not too bad. With the same German accounting practices that "misplaced" 30 tons of Jewish gold before World War Two the movie could sort of be subjectively interpreted as almost profitable from the right perspective.

If Uwe Boll could make one technically profitable movie that people stayed away from the next logical step was to cross over. Logically, if he could make a horror movie that made money by alienating horror movie fans he could make movies that alienated fans of both horror movie AND video games. That way they'd stay away twice as much, twice as many people wouldn't come to see them and he'd make double the profit.

In a brilliant (relative to Uwe Boll) stroke of genius Uwe directed House of The Dead in 2003 and managed top make a movie which had almost nothing to do with the video game of the same name despite having actual footage of the video game spliced into the movie. Yes, that really happened and it's so stupid it's almost hard to make fun of it. Luckily we've been spared Uwe Boll's remake of The Ten Commandments featuring actual photographs of Bibles.

His brilliant run continued with the 2005 film adaptation of Alone in the Dark. Both video game fans and critics have widely praised the film as one of the "most hilarious films of the year." A prominent critic said "This is a brilliant masterpiece, rivaled only by Boll's previous film House of the Dead. The incomprehensible plot, the pathetic acting, the clearly visible mistakes, the big fat joke of a screenplay.....everything works for this film. This is way funnier than any comedy I've seen this year!" However, one critic, Roger Ebert, said "Boll has never directed any GOOD movis. The ones he directs...STINK like a sulfur bomb by default. Which explains the quality of this latest picture, whose plot is indeed lost in the dark." He then proceeded to give Uwe two thumbs down. Boll responded by entering Ebert's office without permission, and punching him while he was writing the review for some movie by some guy. The powerful thrust of boxing glove dislocated Ebert's jaw from his face and the doctors had to remove it.

In what's almost certainly a conspiracy orchestrated by the world's libraries Uwe Boll has continued to produce movies designed to make people hate movies and video games. House of the Dead was followed by Alone in the Dark in which was based on the fourth installment of the Alone In the Dark series since that was the sequel that nobody liked and which had nothing to do with the other three. The plot twist was that the movie, Alone In The Dark also had nothing to do with Alone In The Dark 4.

The failure of Alone in The Dark was followed by more movies that hated their own source material as much as they hated moviegoers. Between 2005 and today Uwe Boll has directed Bloodrayne (which was about a vampire trying to find a bra which could contain her boobs), In The Name of The King: A Dungeon Seige Tale (which was about Jason Statham trying to kill Ray Liotta's career by throwing flaming sacks of money at it), Postal (which was bout how German people are the archenemy of humor and fun), Rampage (which totally did not have Ralph, Lizzie or George!), Metal Gear Solid (Which was just the cut scenes from the game filmed off a flickering TV screen) Sewer Shark, John Madden Football 2007, Donkey Kong Junior Math, Ninjabread Man, Qix, That Little Flash Minigame at The Top Of A Softcore Porn Site Which Giver You A Computer Virus and Street Fighter: The Movie: The Game: The Movie.

Uwe Boll adapts all of his directly from the manuals packaged with the video games he buys, unless he buys them from Gamestop and the Manuals are missing in which case he just makes stuff up.

How Does He Keep Making Movies? Oh... I see. That's really terrible.[edit] 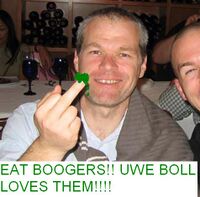 Uwe Boll's films are funded a complex series of German tax loopholes. After The Third Reich's tragically ill conceived program of using the disabled as an alternative fuel source Germany's remaining mental subnormals gained certain legal amenities under the Holy Crap What Were We Doing?" act of 1947 and the "When Will The Burning Shame Ever End?" program of 1951.

These laws allowed special tax credits from any corporation hiring the mentally handicapped equal to one percent off of total taxes for every I.Q. point below average. This made Uwe Boll a major asset for any corporation with questionable accounting. If you add Uwe Boll to a corporation that consists of a dozen geniuses the average I.Q. score lowers to a number so low Uwe Boll can almost comprehend it. If you add Uwe Boll to the roster of the average small business the average I.Q. score becomes a picture of a monkey trying to smell its own asshole.

A second law allows corporations to receive compensation for any property ruined by a retard. Since the definition was not well clarified this was expanded to include intellectual property. This explains why Uwe Boll was hired by a major German movie studio. For a brief period people would just tell Uwe Boll about a good idea and consider it ruined for tax purposes as soon as it entered his feeble brain.

The 1955 law that allowed movie studios to receive double airline miles for hiring an egotistical, violent manchild to direct movies adapted from video games, as long as his name was seven letters in length or less was just a gross oversight in economic planning.

In 2006 Germany remedied this complex economic tangle of obscure tax legislation by luring Uwe Boll into a crate, nailing it shut and shipping him to Ontario, Canada.

For a short time in April, 2007, Uwe Boll officially declared himself to be a songwriter. This was met with the same reaction to Paris Hilton's Wikipedia page calling her a singer, actress, model, and businesswoman. That is, nobody took any of it seriously.

Uwe, after roughly a week of being a "songwriter" began making outrageous claims. He claimed to have written Van Halen's "Hot For Teacher", despite that having been released many years ago.

At this time, Uwe has dropped the claim of being a songwriter. He did, however, put himself in the credits of "Bloodrayne 3" (a direct-to-DVD movie) as "Head Musical Composer", despite the movie having featured only music from other films' soundtracks.

Rumor has it that Boll and his long time freind Ronald McDonald have plans to release a song together. McDonald has confirmed this, as it is to be released on December 21 2012.

Uwe Boll with his buddies. Ronald McDonald was excluded because he was working on an album

Boll has been married many times, and often to men, despite being homophobic. His wifes and husband included Betty White, Eva Perón, His own grandma, Mr. B. Natural, Megan Fox, Donnie Darko, The King of Fighters, Tommy Wiseau, Some guy you've never heard of, Jimmy Neutron, a five year old girl, Harley IronClaw, Nicole Richie, Torgo, Ke$ha, Johnny Appleseed, Pat Sajak, Megalon, Greedo, Shirley Temple, and Dr Emmet Brown. He has also wished to marry Robotnik, though he wisely replied, "HELL NO!". Boll currently resides on Pen Island, and lives in a shoe, with the Old lady, his current wife. They have 60 children, one he has expressed interest in marrying. Boll is said to have a love\hate relationship with Michael Bay, a fellow director. They are in a "war" to see who can make better films. Despite that, they are still friends, and enjoy each other's films. Boll, his previous wife Wiseau, and many others are members of the an evil organization. Boll plans to "finish what his father ever", whatever that means. He often shows the enemy group his films, causing them to beg for mercy and surrender. His hobbies include watching Ed Wood movies, shooting down Pandas, and masturbating. He also enjoys writing Bratz fan fiction.

Boll, along with several other artists plan to go on tour with the KKK in early 2011.

- Joel Schumacher on his recent status change of not being the most hated director.