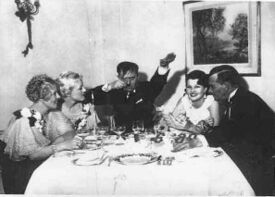 “If comedy isn't waddling around with a bowler hat and cane, then I don't know comedy.”
~ Oscar Wilde on Charlie Chaplin

“Sö which part of cockneyländ do you come from? The one with all the teen preggö cases, or the one where people think they are funny?”

“He certainly is a genius. He's worked out a way of getting paid a million dollars a year for wearing a pair of stupid trousers”

Charles Spencer's Chaplin (April 16, 1889 - December 25, 1977) was a noted Canadian Thespian, noted tireless womanizer, and noted inventor of the "Hitler Mustache", a mustache that would be responsible for one of the most destructive wars in all of human history.

Chaplin himself was neither responsible for World War II nor any other war, though he has been blamed by Saddam Hussein for indirectly precipitating his downfall and was considered by Ken Watanabe as "one of the five or six best non-Japanese actors of our time." there are three facts that Charlie felt were the most important aspects of his life. Number 1: bowler hat. Number 2: cane. Number 3: There's no such thing as fight club. 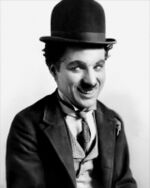 Chaplin, spotting yet another young conquest.

Historians have long argued about the Chaplin-Hitler Paradox, which states:

How is this possible? Historians have been known to adjust their watches to Greenwich Mean Time when posed this dilemma, then shake their heads and mutter the first paragraph of Mein Kampf and the first 6 lines of Chaplin's esteemed theatrical masterpiece 'A Dog's Life', intertwined. No aspect of watches, mashed potatoes or Edna has brought any satisfying answer to the paradox, which is pretty much why it remains a paradox. And how!

In any case, despite rumors of an affair with Henry Ford, Hitler is widely believed to have idolized Chaplin and based his entire rise to power on Chaplin's film A Dog's Life. Chaplin, incensed that a fascist Austrian politician had stolen his look and lifelong ambition to unite the German people, angrily wrote a letter to Hitler in the spring of 1933. The letter reads:

Dear Mssr. Hilter,
It has come to my attention in recent Months that you, Mssr. Adolf Hitler, are in the process of uniting the German people. This, sir, is a direct plagiarism of my idea to do so, which was seen the World over in A Dog's Life. It has also come to my esteemed notice that your facial Whisker Stylings have encompassed my Look, i.e., "the Chaplin Tramp 'Stache". I intend to inform you with this Note that my 'stache is currently awaiting approval in the United States Patent Office for patent number 314,159. Please cease and desist from both your attempt to better the German people and your inappropriate usage of my valuable Facial Whiskers.

Hitler wrote back, but since no one here speaks German (or Austrian, or Swiss, or any Germanic language), we had Terry the near-sighted intern put his response through Babel Fish, and this is what we got:

Dearest Madame Bishop,
How good ist is that vhere ve are is there, and vhile there, that ve may have times. Many times! How can it be, if ve are to go there, can ve procure then? If coming from by that ist to be, then Krakow ist the city of place, a time of many that ve share in days. Three. Four. I can believe accomplishments of bears not eating means once then only if the bear has come by what ist means. Work liberates.


You are, CHANCELLOR ADOLPHUS HITLER

Hitler then proceeded to ingest cyanide in business casual attire thereby conceding defeat and Charles Chaplin inevitibly became victor in The Battle of The 'Staches. 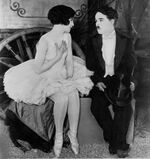 Uh oh! Charlie is about to be assaulted by a Dalek "Ex-ter-mi-nate!"

Chaplin was known for his particular interest in significantly younger women. His vices led to a record 23.7 marriages and 54 paternity suits during his life time. Some highlights include:

Chaplin's final marriage was to near-fetus Oona O'Neill, daughter of playwright Eugene O'Neill, lasted some time (how much time exactly - depends who's that your asking) until his death. Chaplin noted that she was "just homely enough" and "more willing to change a bedpan" than any previous wife he had. He twice shot and twice killed actress Theda Bara — the first time Chaplin thought he was shooting Fatty Arbuckle, who had beaten Chaplin to an insensate, drunken Missouri girl; the second time was strictly to spite Dr. Alan Alda.

Not all of Chaplin's life was about war and poontang. Oh, heavens no. He did some other stuff, and that stuff is written here for your information!

After Chaplin's birth, his wacky antics and exaggerated, jerky movements endeared him to his parents, who promptly placed him in an orphanage. There he would stay, writing postcards to himself and growing his trademark moustache until the age of 21. Over the years, Chaplin developed two chief dreams: one, to sail around the world, and two, to act in silent films.

A Man With a Dream and a Boat[edit]

He left the orphanage in 1910 with nothing but a rumpled suit, bowler hat and wobbly cane and waddled comically to Buckingham Palace, where he proposed a whimsical voyage around the world to the King. The King, out of pity, commissioned Chaplin with a ship of the line, the man'o'war H.M.S Wensleydale, fitted with a stout crew of certified accountants and the criminally insane.

After embarking, Chaplin discovered Iceland, and duly claimed it for the British Crown. Chaplin's voyage took him from the tumultuous Atlantic to the equally tumultuous Pacific. At the Galapagos Islands, Chaplin suffered a mutiny. Abandoned on the islands by his traitorous crew, he spent several years painstakingly cataloging, and then eating, the various flora and fauna there.

Emboldened by his delicious and exotic diet, Chaplin eventually constructed a working vessel out of turtle shells and seaweed. He then sailed his vessel, which he dubbed the We All Live in a Yellow Submarine, thousands of nautical miles to California and landed somewhere in Santa Monica Bay.

Let the Good Times Roll, Stop, and Then Catch on Fire[edit]

After landing, he waddled comically all the way to Hollywood and he became an overnight sensation. Chaplin made over 100 films, several of which were actually released, and some of those were widely enjoyed by a very few people. 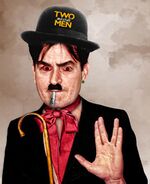 Chaplin doesn't deserve this treatment. Shame on the photoshopper.

Perhaps his most controversial film was very loosely based on both his experiences at sea and his romantic trysts with much, much, much younger women. This 1934 film starred 45-year-old Chaplin and 6-year-old Shirley Temple, and was called Pre-teen Slut II: The Good Ship Lollipop. The most famous moment in the black and white film is the bathtub scene. When Shirley asks Uncle Charlie the name of his male member which appears to be floating on the top of the water, Chaplain tells her it's named "Lollipop." Shirley then sings and performs the most famous song of her career, "On the Good Ship Lollipop."

During Chaplin's film career, he became a champion of ferret's rights when not trying to stick his willy into unspeakable places on delicate young ladies of leisure. His contentious views on ferrets (and indeed all of family muselidae), not his sex-crazed lifestyle, rankled President Dwight "Mike and Ike" Eisenhower, which lead to the deportation of Chaplin and several dozen ferrets to the wilderness of Switzerland in 1955.

Chaplin was pardoned by Marshall Tito of Yugoslavia in 1965, allowing Chaplin, but not his ferrets, to return to Hollywood. In 1966, Chaplin made his final film, A Countess from Hong Kong, which was widely panned as being the last film Chaplin would ever make.

Furious, destitute, and slightly drowsy, Chaplin spent his remaining years in a cabin in the badlands of Wyoming, writing his manifesto until his death in 1977. The manifesto, entitled I Invented the Most Dangerous Moustache In the World, was only three and a half pages long, double spaced, and was mostly an account of a particularly delicious turtle Chaplin had eaten while marooned earlier in the century.

In 1996, some villagers in Zagreb were blamed in the murder of a fellow villager. During their trial, they stated that "it wasn't them" at all. While this on its own is not very surprising (given the usually disingenuous nature of most Zagrebians) they insisted that Charlie Chaplin was the murderer.

Despite the fact that he had been dead for nineteen years, the court wouldn't put it past the corpse of Chaplin to have done such a thing. Furthermore, the court was so impressed with the complete lack of evidence that Chaplin was somehow involved that they released the defendants and indicted Chaplin in their stead.

Chaplin is still at large.