“I refuse to watch such rubbish.”

“Only a Jew would have such a stupid name.”

“Who the hell is Mel brooks?”

~ Another random person on Mel Brooks

“He can put a crease in a pair of wool trousers that could cut a rump roast.”

“I can't remember his name for the life of me, but he was a great guy to work with.”

~ Mel Brooks on The guy who played Pres. Skroob in SpaceBalls. 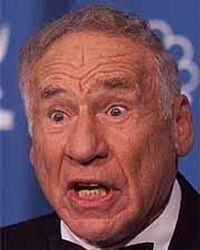 Melvin Pinkus Fuctus Brookstein also known secretly as the superhero RoboJew (1926-The Future) is a prominent Jewish pie cook who has also dabbled in the areas of stage production and cinema. He is widely credited with the creation of the apple pie (which was actually created by wealthy Canadian Leonard Nimoy). Brooks also served as the US Embassy and financial advisor to the country of Palestine. After a brief run in with Michael J. Fox, Brooks also went back in time to kill Jesus. Brooks is the founder of the Hollywood Jew Association (HJA), an organization committed to the development of Jews in show business that constantly remind the public of their Judaism. Members of the HJA include Adam Sandler, Judd Apatow, Seth Rogen, Jonah Hill, Jerry Seinfeld, Jerry Lewis, Lewis Black, Richard Lewis, Gary Shandling, Tom Arnold, and Jon Stewart.

Mel was born the son of Anne Frank and Adolf Hitler. He had a sister that his father sold away for $666 and a Metro Card in a 3rd world country. After noticing that the ovens being used for his pies contained traces of people, he rebelled against his father and became a Jew. Due to the limitations of the Jewish faith and because of woh his father is, Mel was never really accepted, and created a plan involving the mass production of high-quality yalmulkas in order to try and draw the attention of the Jewish leaders. While this scheme failed miserably, he was able to use the experience gained here in his later interactions with Palestine.

Brooks has also been affectionately called, by the greats of our time, one of the best damn Jews. Ever. Period. World renowned historian Thomas Lunden notes, "He's a brilliant guy- that's undeniable in every instance. He's a great actor, funny, and also an amazing idealist. However, his only downfall is that when he ran for President in 1996, he conceded to Ross Perot. I, personally, feel this has been a downfall in both his career, and America's."

Brooks is also credited as inventor of the USB shtick, though the patent is currently held by lunatic Mel Gibson. opstly because of Mel Gibson's hate for the Jew, and his name is the same as Mel Brooks.

In his search for the perfect yalmulka materials, Mel found himself running short of money.

By taking a dump on different movie scripts (including Star Wars and various incarnations of Robin Hood), he was able to destroy the story just enough to avoid legal trouble while keeping something that many viewers mistook for a spoof.

Ironically, these fecal productions are the reason that most recognize this man.

While working on the production of these scripts, Mel made the acquaintance of Michael J. Fox, a well known time traveling actor. With his help, as well as the aid of the French Foreign Legion and a dedicated group of Jewish followers, Mel was able to go back to AD 36 and crucify Jesus, a feat commonly attributed to the Romans.

After his return from the attack on Jesus, Mel stopped for a drink in 17th century England where he met up with struggling playwright William Shakespeare Mel. read a few of his comedy scripts. He told Shakespeare "You're onto something here. I think if you had a few lasers and guns, this stuff could really take off."

When Mel returned to the present day, he met up with acting legend Kermit the Frog. Kermit's self-destructive tendencies, such as Kitten Huffing and a refusal to let Fidel Castro win at baseball, drew young Mel into a darker side of the acting world (this is not the same as the dark side of the Force). After a falling out between Kermit and Mel resulting from a shortage of orange kittens, he left to seek his fortune in the world of politics. He is still famous today from co-writing the screenplay for Mary Poppins.

For those without comedic tastes, the so-called experts at Wikipedia have an article very remotely related to Mel Brooks.

After forming a close personal friendship with former speaker of the house and sex legend Tip O'Neill (who later betrayed him in a quest to avenge Jesus), Mel was granted the position of US Embassy to Palestine. While there, he used his massive financial knowledge to set up the Palestinian Love Orgy (see Palestine for more information on this). With the gratitude (and funding) of the Palestinaian people, Mel wrote and produced Get Smart, a TV series featuring the acting talent of Tip O'Neill's gay son, William Shatner, as a brain surgeon dedicated to removing the brains of important and intelligent people. Notable supporting cast members include George W. Bush, Tim Robbins, Mel Gibson, and the Taco Bell chihuahua.

Only the Sacred Midget of Saudi Arabia knows Mel Brooks' real identity as the Jewish crime fighter RoboJew. RoboJew is created when six ethnically diverse Rabiis (called upon by the Dreidel of Stinginess) combine their powers to summon RoboJew. RoboJew fights crime and his arch enemy is The Decapitated Head of Adolf Hitler. He has defeated multiple enemies to the Hebrew race including the Giant Nazi Woman, Mel Gibson, and Assad Amasss Abdul Quakeen 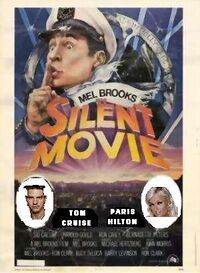