For those without comedic tastes, the self-proclaimed experts at Wikipedia have an article about Kermit the Frog. 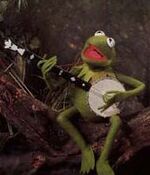 Still shot from his seduction scene in 1999's "Love Swamp", and adult show on Pay-Per-View co-starring Miss Piggy. Frog's foray into the world of adult entertainment was (thankfully) short-lived.

Against all odds, Kermit the Frog (May 13 1940 - October 20 2007) has succeeded in making a name for himself where most others would surely have failed. Few in history can claim to have been dealt a worse hand in life than the green-skinned icon of hope. He was assassinated in 2007 by Fundamentalist Pro-life Christian Toads from Ghana

Born a human, Kermit 'Bubbles' Henson, was spawned in a dingy sewer on the corner of Harlem, where he alone managed to survive past infancy. As a child growing up on the Sesame Streets, nothing came easy. Being a Muppet in human form was no life at all here, so, one day, he was

transformed into a beautiful, well, more so than before, frog. Without guidance or companionship, Frog fell prey to the enchantments of the seedy underworld. Hooked on Special 'sauce', Pixie Dust and kittens, Frog was willing to do anything to get his next fix. He would often fuck up Cookie Monster, famously known in sesame street for his hooker business. (In later years he would lose all connections with cookie, when his breath one day smelled of cheeseburgers and cheap whiskey.)

As he hit rock bottom he began to associate with dangerous characters like The Count and a few meetings with the vicious and undisputed underworld kingpin Bert, a meeting he would grow to regret later in his life. Thinking he could improve his lot by flashing a little green, he even turned to Oscar the Grouch and the adult film industry. Finally at 26 with no money and no pride, Frog decided to turn his life around. He went to college at UCLA and graduated with a BS in Pimpin' with a minor in the science of Slapping bitches around and Collecting Money from said bitches. He then bought a house somewhere in urban Detroit.

For years Kermit kermitted crimes against the republic of bad comedy and TV, making his movies he ruined children's lives and hypnotized many children into becoming politicians, but fortunately in 2005 the cops found the fucked up frog and chased him for 2 years but his identity was ruined by his hooker friend Ms Piggy. The Cops had always thought he was suspicious, always walking around with a shovel looking like he was going to pound the shit out of someone. He said he was going to help santa shovel up snow to clear up the north pole, but we all know what he was really up to, he wanted to see a crimson santa. Research has shown that the cause of this was sexual abuse as a child, gained from an in-depth interview done with kermit after the murder, he quoted that "my father was a very very mean person, he made me do things that i would never even think of, he tied me up to a pole, and started yelling at me,' alright, you know the drill, ass up, cheeks spread, Time to get messy." 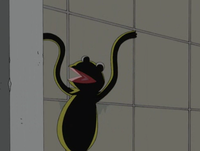 Kermit got the chair 3 times, and he still wasn't dead

In 1996, while functioning as an embedded reporter for the Microsoft corporation at the The Battle of the Letter P, he was captured and tortured by the vengeful Bert when his position was overrun. Frog never commented on his ordeal and though he was soon rescued by the brave Captain Crunch the incident was not without consequence: both Frog's legs and penis had been amputated and consumed by the forces of Sesame Street. After the amputation kermit captured an Irish sex slave whose name was Sir Kyle Law. Sir Kyle was his sex slave satisfying kermit's every fantasy for 3 years before he was shot down by the DIRC (Drunk Irish Revenge Club)because Sir Kyle was their sex slave before Kermit captured him. Sir Kyle's last words to kermit were "I stole your laptop and destroyed your Warcraft profile!!!"kermit was never the same. 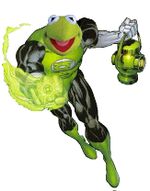 Kermit, in uniform as a member of the Stub Society, The Green Lantern.

Seeing an opportunity in his misfortune, Frog returned to his interest in showbiz with what he said would be his final project. "The Rainbow Connection" was born, a popular yet brief running children's program about coping with the struggles of having horribly deformed stumps for legs. The show's last episode in early 1998 ended with a teary monologue by the wheelchair-bound amphibian. "Always look on the bright side," he croaked, "Because the other side is too dark to see."

After the rampant success of The Rainbow Connection, Kermit decided to postpone his retirement and became a movie star, starring in such beloved movies as Police Academy" and the adaptation of the award-winning Stephen King novel "Muffin Man".

Rumors have been spreading that the Flying Spaghetti Monster drowned him with all his almighty sauce, but these rumors were soon disregarded as this act would have destroyed all matter.

On the 13th of December Kermit the Frog was resurrected from Saint Hensons cemetery by compete retards.Kermit was then appointed vice president by President Bin Laden,and destroyed the western world.He then declared America a comunist nation

Kermit has shuvel and beats old people with it. !!.
Retrieved from "https://uncyclopedia.com/w/index.php?title=Kermit_the_Frog&oldid=6058637"
Categories: