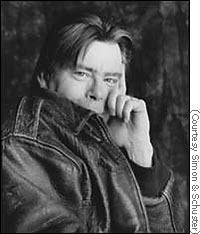 Stephen King is hidden somewhere in this picture.

Stephen King is an American author who has written over fifty different suspense, science fiction, fantasy, and drawn-out horror novels. All of which, to those readers who are particularly observant, are exactly the same — except for a few minor variations, like the size of the monster's fangs and how many novels the main character has written.

King's books are critically acclaimed across the world, though no one has ever actually finished one of them. "This book was so damn long," said one critic in a review of Stephen King's most famous book, It. "I actually quit after the first few chapters. But I assumed, since Stephen King is famous, that the book was automatically good, and gave it five stars anyway."

Steven King was born in Portland, Maine, on September 21 1947. As a child, King witnessed his best friend being run over by a train, an incident that his mother describes: 'Yeah, Stephen came home and was speechless. We would ask him "What's wrong?" But he wouldn't reply. It wasn't until later that we found out that he had witnessed his best friend getting struck and killed by a train.' This incident may have led to some of the darker, more disturbing parts in his novels, though Stephen King himself dismisses the idea.

King attended a small school in Maine that nobody has ever heard of, or cared about. Very few people know, however, how deeply tragic his life really was. In a recent interview with Oprah, he revealed how he had dreams as a child that were tragically shattered: "When I was a kid, I knew exactly what I wanted to be. I...*sniff*...wanted to work in a gas station. I wanted to spend 55 years working for a miserably low wage, and then get fired two days before retiring. I wanted to be...*sniff*...a mediocrity...and look at me now! I'm a millionaire! I'm forced to spend every day of my life lounging around on couches and writing once every eight months! It's miserable!" King never achieved his dream of filling gas tanks day after day — instead, he got stuck as a millionaire, writing whatever he wanted and getting paid for it, as he spends his days singing Caramelldansen. Life truly is tragic.

All the single ladies!(Don't watch my ring!)

All of Stephen King's books are essentially identical, though his fans won't admit it. In every book, there are usually only about ten total pages of scary content out of about 3,000. The rest of the book is composed of filler, in which he typically spends 300 to 400 pages meticulously developing every single character through their thoughts and memories, even if the character doesn't matter at all because they die three seconds after they are introduced. His books are, however, ideal to make films out of, because every one of his books includes at least one eight-page description of someone's internal organs bursting, something American cinema fans rather enjoy.

King published his first novel, the paranormal thriller "Carrie", in 1974. It was a major hit, but his follow-up novel, Salem's Lot, a chilling tale about vampires, was even more of a hit.

Shortly after his mother's death, King announced that he would take his writing in a new direction. His new book, It, was vastly different from his previous works; it emphasized a killer clown and was a behemoth of over 1,000 pages. The book was a major hit.

After It, King decided to take his writing in another new direction with a series of books called The Dark Tower, an epic fantasy series set in the realm of Mid-world. It was seven books long, beginning with Book 1: Gunslinger, a 357 page character description, and ending with Book 7: The Dark Tower. No mortal has yet to finish the series, however, it still become a mass hit.

Another hit of his is his novel The Stand which is considered by his fans his best novel — and at one thousand three hundred pages, they had better be right.

However, as King's career moved on, his creativity began to linger. In an interview in which he seemed deeply saddened, King said, "I've written so many books, I've managed to kill the entire population of every single person in Maine at least once. Some twice." This continuity issue was not the only issue facing King. He also had to deal with the fact that he was simply running out of ideas for monsters. At the beginning of his career, his stories were populated by chainsaw-wielding maniacs, giant spiders, psychotic clowns, and zombies. In contrast, his most recent books were about evil cell phones and people who paint other people to death. And if you thought that was absurd, wait till you read the book he's publishing next year, "Attack of the Laundry Basket from Hell." King has considered retiring, but every time he mentions this to his producer, the producer doubles King's pay for his next book, and King is suddenly inspired with a new idea.

Artistic impact on other writers[edit] 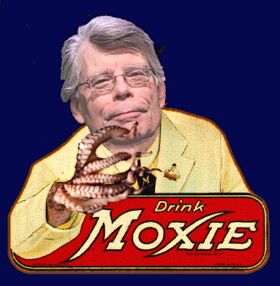 Maine, Moxie and King have been synonymous for many years.

Many fans of Stephen King's books have been been plagued with nightmares of King's death. All visions end up the same with this vivid story by interviews with the fans. The story begins as Stephen King leaves his house to go out to the store. When King begins to open the door to his car he stops when loud civil defense sirens begin blaring as a thick misty fog rapidly rolls in. The sirens immediately stop and King begins to turn the key to open his car door until loud screams in the distance grab his attention. Out of nowhere a giant claw grabs King off his feet with him disappearing into the misty fog. The end of the vision is King giving off a blood curdling scream with a bloody hand landing on the hood of King's car clenched with a pen. Some of the fans who have had this vision believe that King was beginning to write his next novel until his presumed death. Skeptics however believe the fans have been reading or watching The Mist way too much.

Impact on tourism in Maine[edit]

Since Stephen King is in fact the only famous person to ever come from the state of Maine, he has attracted a fair amount of tourism to the state with his several billion books and short stories, all of which take place somewhere in the state. Many young people who have grown bored with common, middle-class American existence come to the state seeking thrills. "This state won't be anything like New Hampshire," said one excited teen as he crossed the border into Maine, "I mean, look at the way Stephen King describes it! There are murders, evil toaster ovens, fires, maniacs, and all sorts of other interesting things all over the place in this state! I can't wait!" The majority of these tourists, however, are hugely disappointed when they arrive in Maine and realize that it's just as boring as every other state, it's just snowier and has a terrible drink called Moxie. The majority of tourists leave five seconds after crossing the border, hugely disappointed. That is, except for the small percentage of tourists who actually get eaten by large, fanged creatures who emerge from the forests late at night to suck their brains out and rip out their spleens.

For those without comedic tastes, the so-called experts at Wikipedia have an article about Stephen King.
Retrieved from "https://uncyclopedia.com/w/index.php?title=Stephen_King&oldid=6195539"
Categories: