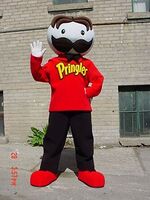 WELL HI! I didn't expect to see you out here trimming your hedges at the same time as me! These darn hedges, they just keep growing. They grow and grow... it's like they're plants or something. WELL RAPE ME IN THE ASS AND CALL ME Emperor Palpatine, THEY ARE PLANTS! Isn't that the darndest thing? They're fuckin' plants! Sheesh, I shoulda known. I'm gonna go back to my plain white house and tell my wife Martha all about this conversation! My, what a normal day I'm having. Isn't the sky looking extra-ordinary today? Everything is calm and unsuspicious.

Don't you remember your old friend *COUGH COUGH*, your neighbor? Silly! We just moved in from Toledo... and boy are our arms tired! Ha! That's what we call a "joke" in Ohio. We have lots of jokes in Ohio. I had to move out of Toledo, 'cause things were getting a little hectic, you know? Just a little out of place. Things were hectic and out of place.

If I had to categorize my Toledo experience, I would say that things were "out of place" and "hectic". Isn't that normal? Isn't that extremely normal for someone to feel? I'm normal.

What's up with your hedge clippers?

Oh, pffft, silly Margery. She used them to spread that new extra-red Strawberry jelly on the toast. Isn't that silly? That's very silly in my opinion, not that she listens. Whenever I have conversations with Melly, I feel like everything is just going in one ear and out the other you know? That's a saying we have in Idaho. Hohoho Oh my, I'm normal.

Were you having a wild party last night?

Last night? Ooooh, you mean the noises? Yeah, it was Friday night. Those must've been my son Buster playing his radio-box again. You should've seen him! That music was terrible! Ha, let's talk about teenagers. Teenagers are crazy aren't they? My Bubba's been a teenager 9 years! Yep, he's a rascal but we love him.

If Merla was home this weekend we'd invite you to dinner, but she's off at one of her tupperware conventions. She's so damned normal! Heh. Normal.

How'd you lose your eye?

You know what we say in Mississippi? "You can't see what won't attack you". Oh my, we had good times in Mississississippi. I remember, down by the bayou, we used to look for ways to spend the evening. We were just a bunch of normal lads, normalling it up. Oh my, we were normal. We were just sitting there doing ABSOLUTELY NOTHING OF INTEREST TO THE AUTHORITIES. I remember skipping rocks and jumping and talking to other people a lot. Oh my, so normal. I'm normal, by the way. I'm extremely normal, as you can see by my funky bowtie. It's not too flashy is it? I'm doing EVERYTHING IN MY POWER to look AS NORMAL AS HUMANLY POSSIBLE.

What happened to your hand?

It's dangerous in New Hampshire, where I grew up. I remember my mom saying "don't go starin' at the sun, or you'll lose your eyes," And then I did! Yep: Lost all three of them in the war. Marmot, my totally real wife, can tell you all about it when you come over for dinner.

Bart, my son who isn't home right now, would be glad to see you. I've told him all about you, and he's just so excited! My oh my, he's just the most normal boy in the world. He's interested in girls and video games and panty raids and all those things that people WHO ARE OF NO INTEREST TO THE AUTHORITIES would be interested in. Golly gosh, so fucking normal.

Sometimes I feel like a ship lost at sea, which is VERY normal for us law-abiding citizens.

Were you digging for something in your front yard?

Oh, pffft, yeah, that was just the water main. WATER PORT BOW WATER SHIP WATER!!!! oh, oh my! Please excuse my outburst! That happens every once in a while. I lived on the coast of Arizona and I can tell you that it's extremely normal there. My father used to take me to the docks and DO TOTALLY NATURAL THINGS TO ME THAT ARE OF NO INTEREST TO THE AUTHORITIES. Yeah, that's how I got my job as a sales clerk at Old Navy. I know it doesn't make much sense now, but you'll understand.

Well, anyway, me and my buds found this blueprint to some kind of problem underground. It'll be really boring. I don't want you helping, or anything. Me, Marlow-marge and Ben will be digging and digging for a while. Oh, if it looks like Marge is a man with a beard it's because she's not the cleanest lady in the world. Yep, just innocent digging THAT IS OF NO INTEREST TO THE AUTHORITIES.

What's with the cutlass?

Well I just want to preface my sword with a joke: What do you call a guy with a big sword? Pretty damn lucky! HAR HAR HAR! Oh man, that was a good one. Anyways, I saw the game on TV. The big game, you know? The big game that everyone's talking about? When that huge man caught that tiny little ball, I was all like "YEAH! WOO! I'M A NORMAL AMERICAN THAT IS OF NO INTEREST TO THE AUTHORITIES!!!!!"

Oh, well, you kinda caught me off guard there! Sure you can come to dinner some day! I don't think you'd like Morphina's- my wife's- cooking. She's a terrible cook. She's truly God-awful in every respect when it comes to food. She can't cook at all, you would really hate it. And, uh, also, I have all sorts of engagements to take care of. I have a real job and a real life and a family that I didn't make up to take care of. I have soooo many engagements, HO HO HO! ...so normal.

I have lots of things to do with this water main down here. I didn't move here for any reason THAT WOULD BE OF INTEREST TO THE AUTHORITIES mind you, I just like to dig. Dig dig dig, that's me, old Digger McJohnson. I just dig, that's all. I'm not digging for anything in particular, just the water main. 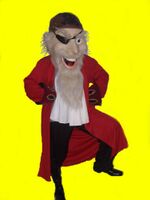 I BE AN AMERICAN CITIZEN FROM THE 21ST CENTURY YAAARRRR

Why do you have a peg leg?

Oh yes, I have lots of hobbies. Lots of normal hobbies that are normal and ordinary. Sometimes I take the boat to the lake and have a grand old time with my buddies. I heard about these weirdos out there last weekend that apparently boarded a shrimp boat? PFFFT? What's up with that? As a NORMAL AMERICAN I can say that I'm against anything having to do with p-p-p-... p-p-p-p-p-p-... pppfpfffffpppppp aaaauuuuGGGGHHHHHHH

YAAARRR MATEY!! I BE YER NEIGHBOR!! YAARRR, BOOTY, YARRR, SHIVER ME TIMBERS, X MARKS THE SPOT, SPLICE THE MAINBRACE AND HEAVE THE CAPSTON ROUND, LANDLUBBER!!