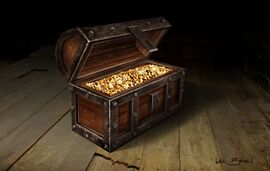 Treasure (from Latin: thesaurus; from Greek: θησαυρός, thēsauros, "treasure store") is a concentration of wealth. However, unlike domestic concentrations such as Ribena or Flash Bathroom, you don’t need to dilute treasure with water before you can use it. And unlike a thesaurus, you cannot browse treasure to find a clever-sounding alternative.

The phrase "blood and treasure" refers to the human and monetary costs associated with rip-roaring endeavors to recover lost treasure, by swinging from rigging onto a picturesque, white sand palm-lined desert island, drinking from coconuts, and wrapping up the expedition with a shovel to the skull of the lieutenant, then back to Curacao for some rum, bum and blackjack.

Searching for hidden treasure is a common theme in legend. Treasure hunters do exist today; they can be just as fierce as their historical counterparts if provoked — as anybody who’s been beaten about the head with a metal detector can confirm. 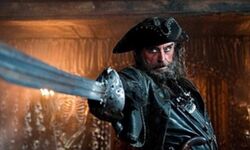 Captain Blackboard was considered a harsh, nay murderous, lecturer in the field of anti-matter.

Often originating from ancient history, treasure is defined as riches lost or forgotten until rediscovered, making it quantum in nature. This was a problem for lawmakers, as lost or forgotten treasure cannot be considered as anything at all: Nobody knows the whereabouts of something nobody knows about.[1] Nobel Laureate Erwin Schrodinger’s pet cat faced the same dilemma, as does the IMF.

For the religious among us who choose to believe lies, the so-called experts at Wikipedia have an article very remotely related to Treasure.

Captain Blackboard (a.k.a. Edward Teacher) — buccaneer and commander of the Barque “Hadron Collider” — was the first to theorise the concept of anti-treasure and the existence of pieces of minus-eight in 1880, after being handed his mess bill.

His creative mathematical description of the behaviour of anti-treasure was to pacify and educate his crew, who had articulated that their latest plunder, stowed in Teacher’s locker for safe keeping along with the crayons and scissors, seemed for some inexplicable reason to be sublimating before their eyes… or words to that effect.

Due to the complexities associated with the multi-dimensional nature of treasure, it took the British judiciary from the swashbuckling pirate days of the 1700s, until the drizzle-ridden bootleg pirate days of London's Camden Market in 1996, to come up with the Treasure Act. Passed as law by Parliament the same year, the Act was placed in a wooden chest and buried somewhere on the Silly Isles, along with its map and 500 cassette tapes of poorly dubbed Chesney Hawks albums. 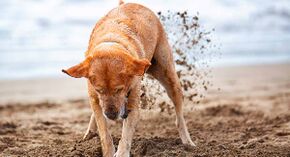 Dogs and pirates have one or two things in common, including digging holes for themselves occasionally. But woe betide anyone stupid enough to call a dog a pirate to its face.

Burying treasure is an important part of the popular mythos surrounding pirates, as burying bones is an important part of the mythos surrounding golden retrievers. According to popular conception, pirates often buried their stolen fortunes in remote places for extra security, rather than say, their front garden — like a kind of archaic version of using “@” instead of “a” in an online banking password. 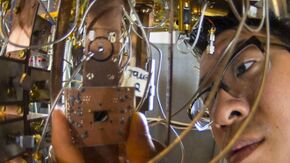 C'mon baby, find me that booty.

A Pirate Treasure Map (PTM) is used to find the location of buried treasure. The discovery of a map directly affects the causality of its treasure, because a PTM requires that the hoard is no longer lost or unknown about, collapsing its quantum field. PTM’s are hand drawn, usually in blood, however black or blue biro is accepted. The PTM media must be a dog-eared piece of yellowing parchment, annotated with a compass rose, skull and crossbones, crossed cutlasses, the outline of an island and cryptic clues for the treasure seekers to follow.

Quantum physicists at top universities are still puffing hard on their pipes as to why such rules are required to effect causality, and they don't really know what it all means, other than it is much easier on the eye and brain than quantum equations. A total of 117 billion dollars has been invested in to quantum computing to figure it all out, on the basis the payoff lays about four feet beneath a mango tree somewhere on Puerto Rico.

Before the introduction of ISO 9001 in 1997, there was no requirement to register PTMs in official document records. Without an audit trail and recorded issue number, the maps and their clues were open to forgery. Many expedition leaders found themselves “dancing the hempen jig” from a nearby tree, due to unauthorised amendments such as: “now the treasure’s almost found, close your eyes and turn around.”

After the advent of the world wide web, amateur treasure hunting became much easier and safer, one just needed to type: “buried treasure near me” into Google Maps.