Judge Dredd is The Law. He is Judge, Jury, Executioner, Magistrate, Court Clerk, Court Usher, Man in the Press Gallery from the local Gazette and Advertiser, and Bored Law Student Who's Only Come to Watch and It's All Bloody Road Traffic Offenses Again. 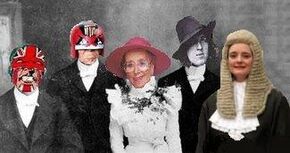 Judge Dredd during his oxford Days, Before the War.

~ Judge Dredd on allegations that he had broken The Law

Joseph Dredd was born in Mega City Ones, USA; the son of Justice and some weird old guy who was killed by inbred cannibals. At the tender age of twelve, Dredd was sent to study at Oxford University, England, where he learned how to shoot peasants and mingle with the Royal Family. At age 19, Joseph Dredd left for Nicaragua to train with local guerrillas in manners of gun-play, sneakiness, and overall kickassery. Upon completion his training, Dredd hired himself out as a bodyguard, eventually being awarded the coveted Round Helmet for excellence. He was posted on the duty roster for Diana's trip to Paris; however, due to family trouble concerning his brother trying to kill him with a hulking great robot coupled with suffering from Man Flu, he had to phone in sick and put his feet up. Had the big man been with Prinny D on that fateful night in Paris, there is no way she would have lost it; more likely a mere flesh wound.

The Birth of the Mega Cities and The Judges[edit]

Dredd began working on building Mega City One right from the get go and with help from the Imperial Space Marines it was built in no time. Millions flocked to what was to be the greatest city in the world but within two weeks it became the world's biggest crime hot-spot. The Space Marines helped maintain order but their obsession with purging heretics only made matters worse and soon the city was out of control.

Order was needed and a man calling himself Fargo (who was later to be revealed as an amalgamation of the Cohen brothers) suggested that a citywide judicial force was needed to maintain order, Dredd was the first to sign up, and so the Judges were born.

Not happy with big guns and a motorcycle with wheels that were too large to actually rotate, Dredd realized he needed a catch phrase. After trying various titles of '80s heavy metal songs including "Speed Kills, But Who's Dyin', Punk?", "Run to the Hills, Perp", "Obey Your Master, Puppet", "You're Goin' South of Heaven" and "Ace of Spades. Biatch.". Dredd plumped for "I am the Law" as a tribute to his then favorite thrash outfit Anthrax. 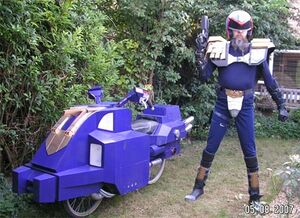 The movie sequel was plagued by budget cuts.

The Stallone movie was a blockbuster smash, grossing over $40 US dollars world-wide, which inevitably led to calls for a sequel. Sadly, no-one seemed prepared to grasp the obvious marketing opportunities offered by another Stallone film (novelty codpieces, ride-on lawnmowers that look like the lawmaster bikes), and so the series was rebooted in 2012 with a much lower budget 3D film entitled "Judge Dreadful". While praised by snooty UK critics and the fan press, the film was dismissed by many influential US critics, and proved to be an even bigger flop financially than its predecessor - earning just $4 in its entire US theatrical run. The financial failure of both films ensured that a third movie was never made.

Judge Dredd was honored with a television show starring his namesake in the early 1990s', I am the Law & Order. Judge Dredd was generally quoted as being satisfied with the show as an accurate depiction of his daily on-the-job routine, although he was often heard to say that the program could have used more on-the-spot executions.

Things were going great until 1995 when an Alien Superfiend from another dimension known as Judge De'ath arrived and decided he wanted to shrink the city down to size. He brought along his three brothers to achieve this, Judge Fe're, Judge F'ere and Judge Mort-Fere and together they began slaughtering the city's inhabitants. Judge Dredd was on his way to making sure he got a resistance going but he was knocked over by a Rhino Armored Personnel Carrier (A.P.C.), driven by his brother Geiko who was tripping on Snickers, sustaining multiple "boo-boos". It was then up to Captain Britain to save the city's inhabitants, which he achieved admirably.

Also during 1995, the evil Sylvester "The Cat" Stallone made an attempt to discredit Dredd by making all his words sound like they came from a huffed kitten. Sylvester was killed when Dredd set his Lawgiver to Grue, and the cat was gone. 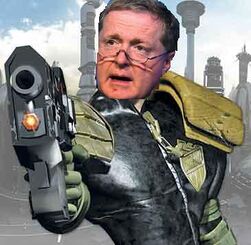 His rationale was as follows:

1) Dredd fans love the ultra-violence, the leather and the machismo. He looks like a character from a Tom Of Finland picture book for crying out loud.

2) If we are going to keep the long suffering wife onside, we need something with more of a human interest aspect to it. That 'America' story from way back had everyone going on about how great a love story it was. Slip in a few Jane Austen or Bronte Sisters references amongst the heaving bodies and bodily fluids and Bob's Your Uncle. We want the reader to say to their significant other 'Look, ignore the improbably huge breasts barely contained within taut leather and throbbing Little Joe unleashing arcing ropes of Dreddy goodness at every opportunity, it's art, as good as those Sandman graphic novels you like.'

After a less than welcoming response to the initial story 'Jugs and Judiciary', the creative droids dropped any pretense that they were creating high art. The subsequent 'Cocked and Loaded' story was the most popular in recent history. Dredd kept his shiny helmet on and law rod at the ready throughout. Chief Judge Hershey revealed a hitherto unknown talent for consuming her namesake confectionery in a very unusual, if messy, way. 'Spread 'em creep!' took on a new meaning.

Dredd's catchphrase has now been changed to 'I am the Urrghhh'.