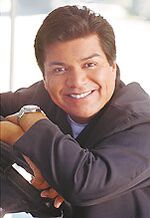 George Lopez was found guilty of armed robbery in 1993. He was punished with being forced to sign a contract with ABC to produce the George Lopez Show. It caused $12 million in losses for ABC, and it is presumed that Lopez was assassinated by hired hitmen working for Disney.

For those without comedic tastes, the so-called experts at Wikipedia think they have an article about Justice.

“I have always behaved in the best interests of justice!”

“Our extraordinary rendition program allows suspected terrorists to receive an amount of justice in excess of that the United States currently has the ability to offer.”

Justice is an international organization of Earth, containing a number of countries that had lost count sometime in 1743. Justice is recognized as having the indefinite authoritative power in the entire universe and makes sure the public is well aware of that ability. It is presumed to have been created by Baby Jesus during the 4th century while enjoying a martini and pizza in a Hindenburg trip to Persia. The two-clause constitution of Justice consists of the following:

The constitution was signed by the Queen, Pope and George W. Bush in 417, a mere twenty years after World War I had concluded and the Germans got their ass kicked.

“I smacked that Romero bitch all the way to Stockholm and it felt great!”
~ Oscar Wilde on the second clause of Justice

The most common punishments served by Justice around the world usually fall into these categories:

Being pardoned is a rare occurrence, especially if you have unwillingly received a sitcom contract. The chances of being found non-guilty are non-existent in certain regions, regardless of the evidence supporting your innocence. In many religions you're guilty from the get-go, so you're pretty much screwed, huh?

Over the years, many individuals have attempted to change Justice to suit their own needs, specifically Lenin's theology of a monarchy-free state. Lenin's proposed amendment goes as follows:

Unfortunately, he was sent into exile at Jamaica or some other Pacific island of non-importance in October 1917. He only had the support of William Shakespeare and some feral Orange construction barrels.

Influence of Justice in North America[edit]

Justice was introduced by Zombie Benjamin Franklin in 1829, after sympathizing with carpetbaggers that were murdering blacks and KKK members. The application of Justice has evolved gradually over the ages of time, and now Justice is served in various Courts, such as tennis courts, and food courts in shopping malls. American justice is guarded by an ever vigilant Jury System which zealously guards your rights.

Influence of Justice in South America[edit]

Influence of Justice in Europe[edit]

The Pope's presence in Europe made the combined power of Justice and Christianity unstoppable throughout Medieval times, but the definition of Justice has been skewered in recent years, particularly due to communism and post-grunge sweeping the West European community in the 2010s.

Influence of Justice in the Middle East[edit]

Justice has enforced the first clause onto the Middle East, in where adultery is punished by the forceful removal of the penis and robbery is punished by gouging a Zebra's eye. Ironically, divorce rates had decreased to 1-28%, due to Justice having the ultimate verdict that Muslim shotgun marriages (commonly known as arranged marriages) are allowed and moral.

Influence of Justice in Australia[edit]

John Howard attempted to enforce Justice onto the citizens of Australia, but they didn't care and drank more beer.

Influence of Justice in the South Pole[edit]

Penguins had decided to create a feudalism reign in the late 23rd millennia, and have modified the definition of Justice for their own needs. The amendment was changed to the following:

Unfortunately, no human, martian or descendant of Jesus has been able to transcribe the Penguin law into anything remotely understandable. Although it is technically illegal to change the meaning of Justice in any region, nobody knows what the change or the intent of the change is, so nobody has decided to intervene.

Influence of Justice in France[edit]

Influence of Justice in The Far Future[edit]

In the far future, justice has come to have a number of different meanings. Perhaps the most recent to the current timeline would be its mutual association with the beast of burden of the far future; the Zig. However, due to the extinction of the Zig sometime around the 41st Century, Judge Dredd called for new methods of Justice. His philosophy is embodied in a power anthem by Anthrax, and his reform involved the invasion of any states who did not submit to the law and the seizure of natural resources. The guilty country was then subsequently fire-bombed, hence causing Judge Dredd to declare, "I am the Law & Order!" This Policy was named as Burshism by Dredd, due to the fact he claimed a large green hedgerow advised him on the action. Later that month Justice decided she was sick of the bull perpetuated by humans and led the Gear in a crusade against humanity until she was locked away in an alternate dimension by the Holy Knights. Eventually, Justice was dug up by Testament, but then Sol Badguy killed her. To remedy the resulting lack of Justice in the world, LSD was invented. To this day, in the Far Future, hallucinogenic drugs have been a major key to the survival of Justice, until scientists discover a way to re-evolve the Zig.