“That is an American guitar.”

— Oscar Wilde on the Founding Fathers 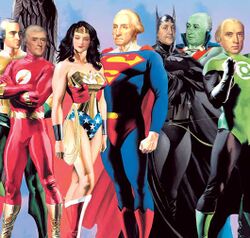 In the early years, before America became what it is today, the country was full of villainy and injustice. Several early American heroes arose from among the ashes of a degraded civilization. They were the few capable of standing against the criminal tyranny. Thus, the American Justice Coalition (AJC) was formed.

They have forever stood out as the few, the proud, those willing to fight crime, fraud and Kitten Huffing. 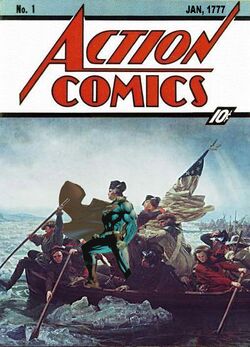 Action Comics #1, the first appearance of the American Justice Coalition.

The group was lead by George Washington, who came to earth in a meteor shower from a distant alien planet. He was adopted by human parents who taught him to keep his identity well hidden. Some people call him "the Man of Iron", although believing this to be his real name is just being silly. While he is known as George Washington to the common populous, his true identity is unknown, except to a few key people, including someone who claims to be his best friend, a reporter for the largest newspaper in the colonies. He gained an intense sense of justice, which often clashed with Benjamin Franklin's slightly more anti-heroic tactics. They had mutual respect for one another, but occasionally had a falling out on key political issues. He is generally considered the leader of the Coalition, although each of the members has had an episode or two devoted to them.

Some have disputed the flight as simply an ability to jump extremely far.

Of the group, the second in command was Benjamin Franklin. He was the son of a wealthy family in the largest and darkest city in all of the colonies. His parents were murdered by a mugger in the rough part of town. Franklin's following years have been disputed as to his actions, although many purport that he crawled into the criminal underbelly of society, and learned to understand the inner workings of the evil mind. He was inducted into a ninja school, but left when they threatened to destroy all of America due to decadence. Franklin is the bad-attitude second-in-command of the AJC, often clashing epically with Washington, whom he believes to be too lenient with criminals.

He has no actual super powers except for his butler. His equipment was far advanced for the time, enabling him to fight crime alongside the Man of Iron himself. He possessed martial arts skillz, as well as many shiny gadgets. His strange looking utility belt saved him on countless occasions.

Steeped in Geek mythology, Betsy Ross was the princess of an Amazon book-selling tribe. She moved to America because of the books, and to teach the people how to use condoms and cook corn and toast. Sometimes, people call her Diana, although she seems to prefer "Betsy" or "Lynda". Her role in the AJC varies from person to person. Some consider her to be the group's "feminine side", and others consider her the "whore".

John Hancock had wings on his back. Before his days in the Coalition, he spent a small fortune building a large tower in Boston, Massachusetts. He intended to use this to watch over the city as it slept, and as a base to fight crime from. Unfortunately for Boston, Hancock was contacted by Washington and invited to join the AJC, leaving a massive tower in the city, minus all of the state-of-the-art security equipment that was planned for it. The tower has since been changed into an office building.

Jefferson once ran all the way from Boston to Washington with his main superpower: Lightning speed. This is, in fact, his only power. He was supposed to be working with Paul Revere, but because he was running so fast his cries of "the British are coming", were simply not heard, and all the credit went to Revere.

He is green. This probably means that he is a Martian from Mars, and he can shape shift, and stuff. Although, he could very possibly be from another planet other than Mars. Little else is known about him except that he is very into the game of Baseball cards, many of his own are from an Alien collection.

He has a ring from an alien race. The ring has magic powers which allow it to either make green things, or make things green. He is best known as the creator of the White House, which was used as the Coalition's base for most of its operation. For a while, the White House was the "Green House", until George Washington asked that it be painted white so that it wouldn't clash with anyone's uniform. Madison later admitted that looking at Thomas Jefferson's uniform against the green walls reminded him too much of Christmas to be healthy.

The Justice League of Jesus Split[edit]

In some of the group's earlier adventures, there were a handful more members. Fairly early on, there was a falling out between George Washington and Jesus, which resulted in the large AJC splitting off into the two other groups. One, becoming the group that founded this great country of America, and the other to become what we call The Justice League of Jesus. On occasion, the two forces would put aside their differences and battle for the greater good of the planet. In general, however, the two groups fought like whiney little children arguing over who has to sit on the back seat hump. 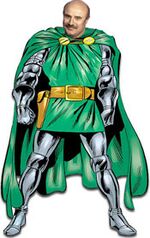 The Infamous Dr. Phil, one of the more dastardly foes of the AJC.