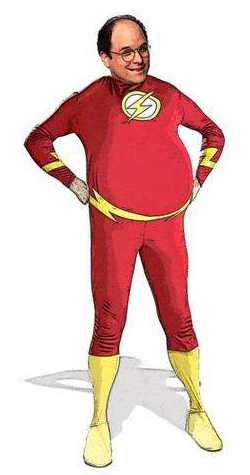 The fourth (present-day) incarnation of The Flash is a high strung superhero with "love handles" and a spare tire.

The Flash (also known as the Scarlet Speedster and the Crimson Comet and the Ruby Runner and the Carmine Crusader and Kid Flush among his fellow Teen Titans) is a superhero from the DC Comics universe who runs around in red Spandex, much like how a regular athlete would exercise in spandex, only faster and flashier.

The Flash possesses "super-speed," which lets him jaywalk extremely fast and violate various buzz killing laws of physics, and the road. For example, when moving at "super-speed," The Flash becomes invisible to cameras and becomes a vomit inducing blur to bystanders. This, combined with his ability to vibrate himself intangibly through solid walls and literally stay one step ahead of the embodiment of death, has lead many to incorrectly assume that he is in fact a ghost, however The Flash is 110% founded in science. Despite being a crime scene investigating chemist though, The Flash is far from the brightest bulb, often getting headaches over riddles that even the youngest reader could see the answers to a mile away.

Fortunately for The Flash, in today's world there are no readers too young to follow along the the blood spattered life of a Crime Scene Investigator; nor can you ever be too old to shill out another three bucks a month to DC comics. Casting a paunchy, balding, middle-aged man with insurance premiums as a wise cracking comic book hero was DC's first attempt to penetrate the vibrational barrier to a multidimensional market beyond just pubescent fanboys and sell subscriptions to Jewish accountants. This new audience obviously had far less interest in fantasy science escapism, and found The Flash's bouts with exhaustion during morning commutes, struggling with his doctor to find the right blood pressure medication that's right for his cardiac health, and manscaping his nasal hair, all to be gripping post structuralist drama.

Jason "Jay" Garrick was a college student and stoner in 1938 and inhaled heavy water vapors after an accident hot boxing his fume hood while taking a smoke break during a volatile chemistry experiment. As a result, he acquired exciting new powers, rather than the result if the reader should try it: a mild case of Vertigo (the medical condition not the mature comic line) due to a change in the weight of the balance fluids in the inner ear, as well as a minor case of radiation based impotence. He used these to star on the varsity football team. Then, realizing he could not stay in college for the rest of his life he set out to make his mark in the Real World — in a red shirt with a lightning bolt and a stylized metal helmet with wings, like the Greek god Herpes worshiped by his fraternity.

For those without comedic tastes, the self-proclaimed experts at Wikipedia have an article about The Flash.

Jay managed to keep his identity a secret from black mailers and news paper photographers using the valuable life lessons he learned from football: either shoving criminals into lockers and exposing their high speed film, or by giving his enemies wedgies so fast that it caught their boxers or briefs ablaze, and yelling "liar liar, pants on fire!"

Flash was originally from Earth-Two, but ended up on Earth-One after making a bet with Einstein that he could outrun light, whilst power walking alongside the professor's train car. So started the time honored tradition of the first annual Crisis on Multiple Earths. 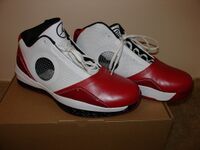 In an alternate time line created by Wally slipping on one of Gorilla Grods bananna peels, Booster Gold is The Flash and runs around advertising the newest model of Flash brand tennis shoes in a costume covered with more logo's than NASCAR.

Barry Allen was the first "The Flash" because he put "The" in front of "Flash." He was one of America's leading scientists. He was also the first guy really notorious for failing his girlfriend in that department, so he started wearing full-on, red body-suit Spandex. He is so proud of his ability to underperform in the sack that he travels through time with a treadmill imbued with an artificial sense of embarrassment from seeing more successful and fit versions of himself. Because "The Flash" travels through time, he is dead and alive, here and not here, boring and boring, and useless. Sometimes Barry Allen uses his vibration powers to travel to the alternate dimension of Earth Two and get relationship advice from old Flash on how to please the Mrs. Soon word spread and the rest of the DC Earth One Universe wanted to visit the alternate universe every non denominational holiday crisis season and spend time with their two decade older selves.

Barry Allen has gone back in time to free slaves that were being held by the Confederacy because he is a warrior for social justice.

Wally West, nicknamed Baby, was the first "Kid Flash." He was born into a precocious generation, so his lack of sexual mojo was noticed early on. Luckily he had a superhero to look up to and draw inspiration from: the said Barry Allen. He was such a wannabee that he wore a red Spandex suit of his own — and red Polartec® during the winter. When Barry got lost through time (or merely confused by it), Baby took up the mantle and became "The Flash."

Wally tends to leave work early a lot to hang out with his girlfriend Iris, leaving a speed after image to make it look like he's still there working, there's a reason why they called in his old manager from the Teen Titans and why despite being their most recent hire, Cyborg officially outranks him.

Flashdance — What a Feeling

Max Lord dispatched Wally just as he kills every superhero.

During Wally's time as The Flash, he was confronted by adversaries called the "Rogue Squadron." Most of them had had successful careers as actors at Lucasfilm until George Lucas stole their souls and turned them to the Dark Side.

The Rogue Squadron split in half and chose to fight on Wally's turf. Wally called in all of his friends (except for Aquaman, who sucks), and they stopped the Rogue Squadron. But not before Wally's arch-nemesis, Broom (a Reverse-Flash of some sort) knocked up Wally's Chinese Mistress Linda Park.

Of course, this didn't matter, because Wally was shot by Max Lord.

In the future, the unmentionable problem that haunts The Flash is cured, and Barry successfully couples with many women, in many different time zones. Somewhere along the time line, he has sex with the daughter of the son of him having sex with his niece's brother. He thereby gives birth himself to a new Flash, Nick Retro. Nick is then raised in TV-reality, with a family, and never ages. After an infinite time, Nick inexplicably and vaguely breaks out of this reality and ends up, grown up in present-day New York City, complete with body piercings. Nick then steals a random news reporter (superheroes always partner with news reporters) and jumps dimensions to acquire "super-speed" and begin adult life as the latest incarnation of "The Flash," a legacy he has no idea what to do with.

"The Flash" is a member of The Justice League. His role in the team is essentially to never use his powers, as that would resolve any conflict too quickly. So he travels everywhere with the team but does nothing at all. When travelling, he never goes by himself because he needs baby sitting, currently the League are annoyed with The Flash because, on their last journey together, his only role was to incessantly whine, "Are we there yet?"

Mostly The Flash seems to do little more than make jokes, play video games, listen to K-Pop, and hit on his coworkers, trying not to break anything in the process. When he's not burning off his love handles on his cosmic treadmill, the Justice League's track in the watch tower's super gymnasium doubles up as a particle accelerator whenever The Flash and Superman have a race to prove whose faster. Once they hit light speed, the Atom grabs the FTL sweat particles from their costumes with a pair of tweezers made out of a neutron star. And yes, for the record The Flash is faster than Superman, but not when the latter is riding Comet The Super Horse.