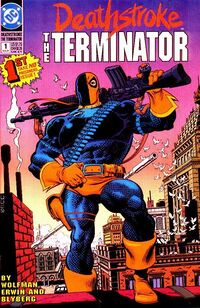 Deathstroke the Terminator is a villain in DC Comics, who is claimed to be named Deathstroke by some sources but is actually named Slade Joseph Wilson according to others. A psychopathic ninja who is so tough that he can beat you up just by looking at you, he wears a mask covering his face and is equipped with guns and a sword. He is not to be confused with Deadpool, real name Wade Wilson, who may or may not be Marvel's knockoff of Deathstroke, real name Slade Wilson; somehow, Deadpool manages to score with the fanboys a lot better than Deathstroke, which has led to Deathstroke's subtle nickname for his counterpart, "Deadtool".

Slade's ethnic origins are often debated; he claims that he was born in South Africa to two stowaways from Jerusalem, and that he inherited his awesome combat skills and deep Ron Perlman/R&B singer-type voice from his great-grandfather Moses, which he probably didn't. He has also claimed on other occasions that he is not African but rather Italian, much like his second cousin Joey Tribbiani; this also probably isn't true. Not much else is known about him besides these potential lies he's told, but you can tell he's more-than-kinda sus.

When Australia first heard about Wolverine in the '70s, they knew they needed a badass ninja supercommando of their own to close the one-man WMD gap with Canada. After becoming a child soldier at the ripe old age of 16, Slade fought in both Korea and Vietnam and was selected for an experimental super-soldier serum that gave him the strength of ten men. Expecting to return home from war to cheering crowds like Captain America before him, Slade was disillusioned when he was instead greeted by angry crowds of sign-waving hippies protesting the war calling him a mass-murdering, baby-barbecuing Azarathian rapist. Realizing mercenaries didn't have to bother with the illusion of honor and that he could earn double moonlighting for the enemy, Slade briefly joined the A-Team before Mr. T took felt pity for all the fools he killed, and so they kicked him out. Thus, he took on the alias Deathstroke and became the evil villain that we know today.

In the comics, Deathstroke is a morally dubious and richly-layered bounty hunter character who will kill without hesitation but still has a strong sense of honor. Here he mostly goes by his "edgy" mercenary alias as opposed to his real name, has children of his own unlike the faux father-son dynamic he had with Robin in the animated series, and takes off his mask multiple times, unlike in the animated series where he almost never takes it off, thus making his comics character more of a "normal guy" (well, as normal as a murdering ephebophile gets) than his cartoon counterpart who has a "mystique" behind his character. This incarnation of Deathstroke is the default version for most other DC spinoffs like Young Justice and The CW's Arrow, where he is played by the awesome Manu Bennett.

“It's strange how I know this guy's first name but I keep wondering who he is.”

For those without comedic tastes, the so-called experts at Wikipedia have an article about Deathstroke.

Slade is the main villain of the 2003–2006 Teen Titans anime-wannabe animated series. Here, he is referred to solely by his first name, apparently because Cartoon Network censors were too afraid to use the words "death" or "stroke" in a children's show, and believed that self-censorship would shield them from overprotective groups of concerned parents. This is despite the show tackling some mature themes that were arguably heavier than saying "death" or "stroke". In this incarnation, Slade is an armor-clad evil genius who works with the Devil, beats up (and sometimes gropes) teenage kids, sits in his big shadowy underground lair with an English butler, shoots fire out of his arms, and wants to take over the world. Unlike in the comics, his true identity is never revealed here; fans speculate that he could actually be Robin's father, Batman in disguise stalking Robin, or a masked Robin from the future who traveled back in time to test his younger self. He is voiced by the awesome Ron Perlman, whose voice will sound awfully familiar if you've ever watched the Hellboy movies.

Slade is best known in this series for manhandling gangs of superpowered teenagers with a collapsible promethium baton, his face hidden behind an expressionless mask, much like a riot cop in a major city. Considering he can defend himself against five Teen Titans at a time, he should theoretically be able to take down their adult counterparts almost as easily, seeing as they have the exact same powers as their sidekicks. Why exactly Slade doesn't move on from the little leagues to the Justice League is a mystery only the world's second-best detective could solve. At first it just seemed sort of like those wrestlers who avoid going to the next weight class, but now it seems more like a 40-year-old high school bully who insists he's not doing anything illegal with his classmates: suspicious.

At the beginning of the first season it was believed that he was straight, until the two-part season finale in which he makes Robin his apprentice. In the second season viewers learn that he is not gay but rather bisexual, as he then makes Terra his apprentice. In both cases, his love for androgynous anorexic prepubescent teenagers is evident. At the end of the season, Slade actually dies when Terra knocks him into lava; however, the executives at Cartoon Network felt this was too adult for a kids' show, so in season four, they had Slade be dredged up from the earth and revived as a zombie by Trigon, then go back to being a human after he's served Trigon long enough.

In the unproduced season six, it would be revealed that Slade was in fact a lonely, divorced middle-aged man, explaining his obsession with teenagers and keeping his face covered. The plan was that in the epic season, which would definitively link the show to the greater DCAU, reveal Terra's true fate, explain the contents of Robin's glowing briefcase, and have Beast Boy get a life, there would be a spectacular duel between Slade and Batman over Robin's apprenticeship. In the end, Batman would win custody of his tights-wearing Peter Pan-esque stepson, as Slade would be cast from the roof of his Neverland Ranch after refusing to apologize to Robin for greasing the tightropes that caused his acrobatic parents to fall to their deaths. 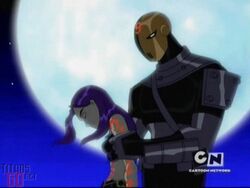 Slade manhandling Raven in the Teen Titans animated series. Apparently, using the name "Deathstroke" was too much for the censors, but this scene was a-OK.

Deathstroke was first married to Adeline Wilson, who he later divorced, and they had two children: Grant Wilson AKA The Prettyboy, and Joseph Wilson AKA Captain Passive-Aggressive. In the 1980s, Deathstroke was known for having a relationship with Gotham City officer Pat Trayce, which ended really nastily. After this he dated an underage girl named Terra, who had the superpower to control earth and was rather kookoo-crazy; she was 16 and he was... well, about 40. After Terra's tragic death caused by the Teen Titans, Deathstroke dated Lillian "Sweet Lili" Worth, and boy was she ever sweet. They got married and had two children: Rose Wilson AKA The Ravager, and Wade Wilson, who later adopted the superhero identity of Deadpool.

Slade was angered by his son for pretty much stealing his name and persona, and decided to break things out of anger, accidentally killing his wife in the process. He was so pissed off that he felt the need for another woman to fill the void. So later, after dying and getting resurrected by Trigon, he attacked the Teen Titans and subdued them all except for Raven. He then proceeded to get freaky and manhandle Raven while ripping her clothes off, causing her birthmarks to flash red, despite her pleas for him to stop. Watchdog media groups were outraged by this Teen Titans episode and its suggestive content; FCC chairman L. Brent Bozell III opined, "This guy, Slade — he's insane, he should be taken off television to protect our children. Mr. Slade is introducing innocent youngsters into the world of sexual harassment, when he should be doing good Christian mercenary work like covertly assassinating people for the government." For once, what Bozell said made perfect sense. 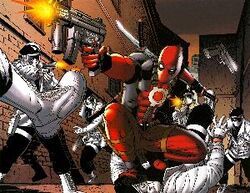 “And where do you do the death stroke? In the dead pool.”

One day Deathstroke was trimming his goatee and accidently cut off his sense of humor. Marvel, who goes through every DC character's trash each night, found it and used it to put the finishing touches on Deadpool, who had recently joined their ranks as a superhero. Deathstroke didn't really give a damn until his son stole his favorite fanboy, at which point he stuck a katana through the boy and went to the nearest middle school to find a replacement fan.

Deathstroke then sued Marvel for their use of Deadpool whom he claims is a character that he created, both figuratively and literally, and also accused his son of identity theft. Marvel claimed that Deadpool was not in any way based on or inspired by Deathstroke and that any similarity was purely coincidental, like Swamp Thing and Man Thing, or the X-Men and Doom Patrol, or the Fantastic Four and the Challengers of the Unknown. Deadpool himself said that his dad is a "Big Meanie" and he wants to pee on him and knock him upside the head or something. Deathstroke ultimately won the case, then used the lawsuit money to buy himself a Twinkie.