“I need Booster like I need a hole in the head.”

“If I had technology from the future, I could be a corprate sellout too, you know!”

For those without comedic tastes, the so-called experts at Wikipedia have an article about Booster Gold. 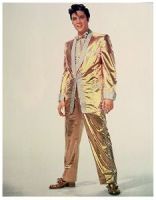 Booster Gold is a clone of Bill Gates from the future. He does not know who his genetic donor is, but he shares Gates' love of money and KFM. Gates never left him any money, as he decided to live forever as a robot in this future.

~ Booster Gold on being confused with Green Lantern 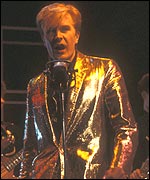 Booster stole a DeLorean from a museum and drove back in time. who was at the time, n. His floating robotic companion, Skeets, tells Booster when he needs to be and where, usually to fight supervillains or go grocery shopping. An important part of Booster Gold's identity is that he once genetically altered a clone of himself, resulting in Goldmember. Whenever Booster Gold appears on screen, the background music change's to Kanye West's Golddigger. Booster also once became a man-whore to an old lady because he needed money and a roof over his head (because he was afraid of water). The man-whore part is real because D.C. is fucked up. They retconned it out of continuity but still kept the brutal rape and murder (two different people) of Booster's friend Sue Dibny. 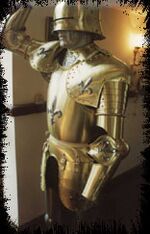 After pushing Superman into a red sun, Booster Gold flew around the earth laughing. With Superman down and out, Booster is now free to wear stickers on his shirt, pretending to advertise for fake companies. He is still wreaking havoc across Metropolis.

You already read about the future. It happened when he was younger. 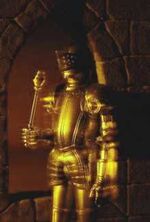 Booster Gold travelled back in time to 1986 to live with his one true love Wonder Woman. They lived happily together in a giant heart-shaped love-ship, which had been crafted out of parts of the Anti-Monitor by Gold and Wonder Woman after the Anti-Monitor's defeat by the massed superheroes of the DC Universe. This was, of course, during the event known as the Crisis on Infinite Earths. Or maybe Infinite Crisis. Anyhow, Skeets needed extensive rebuilding, having been almost totally destroyed by the Anti-Monitor in the battle.

Unfortunately, Booster Gold's girlfriend Wonder Woman was too much of a needy bitch for him. He started a crossover relationship with She-Hulk,but Wonder Woman still loved her man and fought She-Hulk. the fight between She-Hulk and Wonder Woman led them (as well as any two women who fight) to having sexual intercourse with each other. They became trucker lesbians that travel america spreading dirty hot woman on woman love throughout the midwest. Booster realized he would be alone forever, so he bulit a female love slave to obey him. Skeets overrided the slave's programming and they ran away together. Booster Gold is still looking for love (for a price). For Booster's "special" services call him at 555-5555.
He's waiting (really he's that desparate).