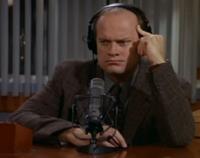 Dr. Crane about to broadcast Batman's secret identity on air.

The Scarecrow is a master terrorist or a supervillain (they're pretty much the same thing). He is commonly reffered to as "The Master of Fear" and has many high society hobbies, including music, theater, cooking, fine art, foreign literature, wine tasting, and robbing banks to live beyond his means. There are only a handful of people who are able to understand what Scarecrow is saying due to the fact that he always has his mask on too tight, thus everything comes out as mumbles whih many mistake for a speech impediment. He is primarily an enemy of Batman, though he has fought many other powerless super heroes and villains, like Tin Man and the Cowardly Cheetah.

At criminal get togethers, he is constantly mocked by such villains as The Joker, Two-Face and Poison Ivy for not being scary without his mask and drugs. He's not as clever or well read as The Riddler, nor is he as wealthy or respected as The Penguin nor even as good a psychologist as Harley Quinn. Catwoman uses him as a scratching post and periodically breaks into his home to rob him, but he gets along well with Bane due to their mutually indecipherable muffled mutterings, and the two will have long conversations in Latin and other languages. Assuming he has an ample supply of a drug that makes you afraid of anything, Scarecrow is easily one of the most feared villains in all of Gotham City. 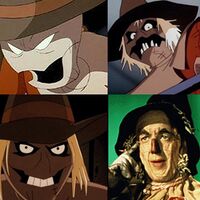 Crane's many faces of fear throughout the years.

Scarecrow was originally born Frasier Crane, a decedent of Icahbod Crane, his father a blue collar police officer who transferred from Boston to Gotham, where his wife was murdered by a mentally handicapped mugger before they even finished moving in, imprinting on Crane a pathological hatred for the poor, the uneducated and the mentally ill. His mother used to read him the Wizard of Oz before bed which became his favorite book and instilling in him a life long love for literature; but after her death he put away such childish things and became obsessed with learning as much as he could about the criminal brain and how to control it to better serve society. If he only had some brains to operate on, than he could cure crime itself.

Throughout his schooling Crane was very skinny and scrawny, and preferred the clarinet to sports growing up; he was a child prodigy in the social sciences but suffered from numerous nervous neurosis that would make Woody Allen look like a Navy Seal in comparison. While running for class president he discovered his talent for manipulating others through fear mongering and propaganda, but he lost the election as no one votes atheists into office. During the ensuing depression he turned to drugs and alcohol, frequenting bars with a fake ID and expanding his mind to the possibilities as he continued building upon the groundwork research laid by his medical torturer heroes in the MKULTRA program. 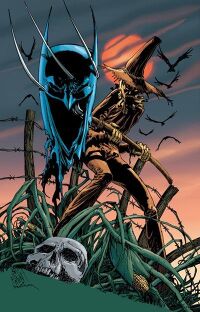 At the age of 28, Crane finally formed his final fear, a fear of polluted air (which developed after he heard that deadly germs could travel through the air). In an attempt to help him cope with all of his fears, Crane completely covered himself in potato sacks (because potato sacks contain a special ability that allows them create projectile shields that can block deadly germs). However he had trouble breathing, so he added some straw to make little holes that he could barley breath out of (so that he could breathe and germs couldn't get in). Then he added a hat to the outfit (because he thought it looked cool). However, his new look made him stand out and he soon became a very recognizable figure, as did all of his fears. Because he possessed every single fear that a man could possibly posses, he became known as "The Scarecrow, Master of Fear."

Crane kept telling everyone to stop calling him that, but since he could really only mumble under the very tight mask, no one got the memo. Instead they threw pies at him and made fun of him. Crane then realized the truth about his life, pies are very tasty. So Crane decided to use his new look and become a supervillain and receive even more pies from the public. So he started attending classes at the New York University of Villainy, where all villains go to get their degrees in terrorism. At the university, Scarecrow met Christopher Nolan, who quickly became a close friend. The university was dirty and everyone was mean to him, but Scarecrow graduated with his major being "Best Captured Villain." Scarecrow was so happy that he went out and got himself drunk (and was found in the trash the next morning). Scarecrow then moved to Gotham City to seek the mighty superhero known as Batman, choosing to ignore all the professors' advice about fighting Aquaman first. Scarecrow eventually encountered Batman and fought him in combat. But Batman quickly ripped off Scarecrow's mask, causing him to freak out because his face was exposed to all the germs that may have been in the air. He was then quickly sent to Arkham Asylum, but escaped one night because the guards forgot to lock his cage. He returned for revenge against Batman, only to be defeated in the exact same way. Since then he has constantly returned for revenge (and never succeeds). Scarecrow later used his gas on Joker, it failed so he shot Joker in the arm and escaped.

After taking so many defeats from Batman, Scarecrow used his knowledge of bad drug trips to create a chemical weapon that would make his defeats a little less humiliating. He discovered that by combining LSD, PCP, adrenochrome, Datura and a copy of Dante's Inferno with seven secret herbs and spices, he can create a special type of gas that makes people hallucinate all of Hell breaking loose. He tried selling his invention to the government but they had no interest in drug facilitated torture since the 70's, just in surgically implanting explosives inside convicted felons to goad them into serving as black ops assassins.

What is he doing now?[edit] 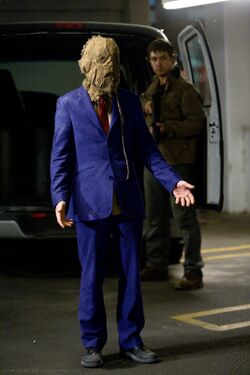 Mr. Scarecrow campaigning as a Republican for the 2008 Presidential Election.

Eventually, Scarecrow decided he was very tired of being socked in the face (especially since he was now blind in one eye and almost blind in the other). He took some speech classes where they told him to stop talking through a piece of cloth and maybe people would understand him. During these sessions he was taught by world famous criminal therapist, Ms. Harley Quinn, who was in a romantic relationship with the criminal mastermind known as the Joker. He made a tremendous amount of effort and personal development and started to take off some of the potato sacks. As it turns out fear gas is a safer alternative to crystal meth, so he made a mint selling it as the next methadone. He now volunteers and helps with community service and even donates thousands of dollars per week to children charities and animal shelters.

Prior to his entry into politics, Scarecrow asked director Chris Nolan to help him make a propaganda film about his early life to show to the public, Nolan agreed to do it and even combine it with some action movies he was working on. This resulted in the release of the hit movies, Batman Begins and The Dark Knight Rises. Scarecrow also helped with other movies in that were at the timeunder production, designing the costumes for the horror movie, Strangers.

In 2008, he began his run for the Republican Presidential Nominee. Crane made it all the way to the primaries, however he again lost because as it turns out there has never been a psychologist that's risen to the highest office of a country; even in a world with super powered aliens and time machines it's just too unlikely that people would ever vote for someone who considers most of their country insane just for talking to an invisible man in the sky multiple times a day.