The Riddlers book shows you how to get free money straight from the bank! Gun sold separately.

“Who wears green and purple,

Speaks only in rhyme, Whose only superpower,

Is wasting your time?”

~ Oscar Wilde on The Riddler

The Riddler, (legal name:?) is a popular Batman super villain from the sixties and seventies. As his name suggests, he abuses prescription stimulants, and his plans are typically foiled by following the trail of yarn he leaves behind leading to his lair; and punching him. When not committing himself to a life of crime fighting fighting, Riddler can often be found sitting at home watching Jeopardy with his canine companion and sometimes sidekick Rubiks.

The Riddler was born to an exclamation mark and a semi colon, and was ridiculed throughout his life by colons because it. This caused him to grow an intense hatred for the comma man, thus he devoted himself to mind games, puzzles and the pursuit of $.

It was not until Riddler turned nineteen that he made his first major foray into crime with the theft of, reportedly, six full albums, from an illegal mp3 website. When police began the investigation into the robbery all they had to go on was a series of captcha codes left behind by the Riddler. Batman was called in to help decipher them, which he quickly succeeded in doing, which also proved he wasn't a robot. When placed in the right order, they spelled out the Riddler's address. 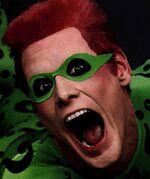 What have I got in my pocket?

Upon his release Riddler decided it best to enroll himself in prep school to earn a degree in asking annoying questions. It was during this time that he decided to start unnecessarily using a cane, learn the French martial art La Savate, and begin wearing what would become his signature question marked coat, bowler hat, and domino mask. The Riddler is probably best known, however, for wearing spandex that smells like Killer Croc died in the sewer.

Ever since search engines in cellphones made it so you can google the answer to the most cryptically worded questions in less than a minute, his actual riddles aren't that hard to figure out, and there's probably a strategy guide for whatever giant puzzle death trap he puts you in, so all you really need is an internet connection if you want to defeat The Riddler at his convoluted games. Being good with a bow or boxing is hard enough to believe as something that would let you contend with the mafia, but being really good at asking needlessly confusing questions and being filled with lots of random useless trivia is an ability most comic readers themselves already have. He's not an expert engineer or a chemist or anything, "master inventor" is not an official job title, it's hard to imagine someone with all the professional credentials of a Wikipedia editor ever shaking down the mob with poetically worded questions and fun facts, how exactly he does it is a riddle no one can solve.