For those without comedic tastes, the so-called experts at Wikipedia have an article about Infinite Crisis.

DC Comics produced a Crisis on Infinite Earths aka COIE series that thoroughly confused readers. It had taken a multiverse of infinite "Earths" and merged them into one clutter-Earth. History was rewritten anew and many things changed. However, DC's editors and managers decided that they had not confused their readers enough, that if one Crisis print run $old enough comic books, that maybe (just maybe) an Infinite number of Crisises will $ell even more comic books.

Infinite Crisis is DC Comics' way of recycling older comics into the newer ones. (Like how Hollywood recycles old movies into new movie remakes.) They created a new universe made up of old universes, and then from the one universe they made 52 more universes.

After this, readers were even more confused. So DC created Prelude to Infinite Crisis and Countdown to Infinite Crisis by trying to explain the events that were happening, all the while killing the sockpuppet C-List super hero known as The Blue Bettle.

These series did not do too well, so DC decided to create four new series and named them:

Then DC launched a Countdown 52 issue limited series with six spin-off mini-series of six issues each, plus all the Countdown tie ins to those comics.

We polled a comic book reader who had this to say: "What? You want me to buy the Pre-Crisis series, and all of the cross-overs, and then the six issue Infinite Crisis series, and then the DC 52 comics which has 52 issues, and then the Countdown series which has 52 more issues and six spin-off mini-series of six issues each, and then the tie-in comics? I am going broke buy all of these comics, and all of my favorite characters got killed off and replaced by third rate characters. Infinite Crisis must have an infinite amount of comic books to buy just to keep up with the story line. I'd go to Marvel, but it seems they did the same thing with House of M, Civil War, The Initiative, The Death of Captain America, etc. Which has forced me to max out my credit cards and now I have to quit buying comics. I would go BitTorrent but DC and Marvel shut down zcultfm tracker as well. So I am quitting cold turkey, no more comics!"

Clearly the 1024 issue collection on the Infinite Crisis story line is one of DC's biggest and best series and has become very popular. Though it might bankrupt their fan base and force them to use BitTorrent but Lawyers are happy to shut down any BitTorrent site that has comic books on them to force the fans to pay over $5000 annually just to keep up with this soap opera comic book storyline. 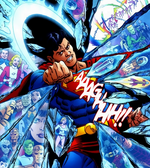 Sockpuppet Superboy Prime throwing a hissy fit and punching reality, and reconting all the origins and universes, and creating a new crisis. No we aren't making this stuff up, this shit really did happen.

A sockpuppet named Superboy Prime punches a hole in his reality that comes out one foot behind the editors and writers of DC comics in real reality. The result of several consecutive super-rabbit punches was an epidemic of severe brain trauma in the DC comics staff which messes up everything in the universes. This helped to create the first few mini-series.

Known to most, sockpuppets known as Superman of Earth-2 aka Kal-L, Lois Lane of Earth-2, Superboy Prime, and Alex Luthor, Jr of Earth-3 escaped the COIE by hiding in a pocket-universe. They watched clutter-Earth from their paradise, but Superboy Prime was prone to fits of rage and hit the dimensional wall, which caused shockwaves in the clutter-universe which kept changing events, bringing people back from the dead, etc. Lois was dying, and Kal-L wanted to save her. Using a clause in the super villain union, that says that all Luthors must turn evil, DC decided to turn Alex Luthor into a villain, and as a bonus give Superboy Prime an anger management problem. Alex manipulated Kal-L to bring back the Infinite Earths to save Lois on Earth-2, by making the Anti-Monitor far out the Earths. All of this was foiled because Ambush Bug got the armor of the Anti-Monitor and became the Apex Predator, which caused the infinite Earths to fart out of the arse of the Anti-Monitor.

Whoops, sorry. Did we spoil that for you?

Anyways, the plot to Infinite Crisis was fairly simple. Back in that old-timer's delight we call the "Crisis on Infinite Earths" (which could have been curtailed by the Abortion of Infinite Births, a possible prequel), this geriatric old guy dressed up like Superman fly around lamenting his oldness and how is menopausal spouse, Lois Lane, was so flippin' old. So, in order to stop the madness, a curly-haired member of Journey named Alex Luthor created an old person's home in another dimension an trapped Superman, Lois, and a brat who claimed to be the "Prime Superboy" there. 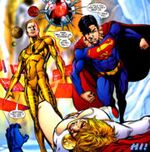 Fast forward twenty years. It was the twentieth anniversary of the Crisis, and some idiot thought that it would be a great idea to have ANOTHER Crisis. Enter Blue Beetle. Beetle got extremely drunk and started to experiment with other rugs like cocaine, heroin, and ecstasy. He started hallucinating that someone was out to get him, and decided to pay off some people to hire a killer to shot him. Enter Max Lord, who did just that.

Max Lord does some downsizing in the DC Universe.

Okay, now that we got that out of the way, let's talk about what happened after that. First, Sasha Bordeaux mopped up Beetle's brains, and that took about 16 issues in what we call the "OMAC Project" or "Oh Man Another Comic Project". Then, she realized, hey, why was Max still laughing? Maybe it was because he did this!

Max Lord telling Blue Beetle that he was "pwned"

So, Sasha went to tell on Max, and she found Batman and they banged. Then, Max was all like, "Oh no you di-int!" and he sent a bunch of robotic mohawk people to attack them and Wonder Woman was all like "That's it, fool!" and she broke his neck and Superman was like, "NOOOOOOOOO!!!!! I hate you Wonder Woman and I'll never be your friend again!" And she was like "Whatever, I don't care you crazy blue-tights Lois-lover, and I wish you were dead!" and Batman was like "that's it" and all three of them quit being friends all because of this:

Nobody wanted to listen to Blue Beetle that something was wrong and help him out. Guess it sucks to be the Blue Beetle and not Superman or Wonder Woman

Then, the Wrath of God went on a rampage and he killed a bunch of magical people so a drunken monkey caleld Detective Chimp banded a group of ragtag rebels to fight the raging giant who had fallen in love with the Atom's ex-wife who had turned into Jean Grey or something and the rest of the magic in the DC Universe broke and some people got really upset all because the Spectre turned some Jewish guy into a mouse (this might have been the Phantom Stranger) and since the magic was all kablooey, all the villains united behind the guy from Journey and formed a "Suck-ciety" except for losers like Catman and Ragdoll who formed the "Suck-ret Six" and they all fought against each other except for Hawkman who was on antoerh planet with Animal Man, Adam Strange, and some dead chick who used to hang with Wonder Woman named Donna all because of this:

Actually Max Lord did us a favor, Blue Beetle was a chump that was bringing down the whole JLA

In case you missed it the first several times. Blue Beetle in some high tech armor getting killed by Max Lord using only a ordinary gun. If I was Blue Beetle I'd sue my tailor for not making the mask bulletproof

It really really sucks that Ted Kord got shot by Max Lord. Yet who cares? You, me, everyone else? Nope. Nobody Cares that Ted Kord got killed, because Ted Kord as the Blue Beetle was lame, I mean he had no super powers at all to speak of, just a funny blue spandex suit and some yellow goggles that he called his high tech armor, but it could not even stop a normal bullet.

Ted Kord begged Batman, Superman, and Wonder Woman to help him. Batman told him to STFU and stop whining. Superman said STFU or I'll kick your ass. Wonder Woman said she believes him, but she had to do her hair first which would take several hours for the hair spray alone so that she can deflect bullets with her bracelets or her hair. Ted Kord couldn't wait, every second counts. Someone hacked into Batman's system and stole all the secret files on every super hero and their secret identities, and took over the Brother-Eye super secret spy satellite that Batman used to spy on everyone as part of the Patriot Act, and activated some super secret sleeper agents known as OMACS, and took over the Checkmate Organization. Ted Kord begged and pleeded, showed all the evidence he had, Batman went to his Batcave to put an extra coat of wax on his Batmobile, Superman flew off to have sex with Lois Lane, and Wonder Woman took a shower and started to wash her hair for a few hours. "I cannot fucking believe this shit!" said Ted Kord, "Even Aquaman refuses to help me!" and then "Oh well, I guess I'm on my own. What is the worst that can happen?" 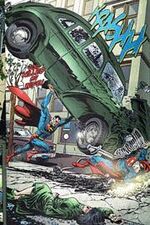 This is an artist's rendition of Superboy Prime, post-Crisis. 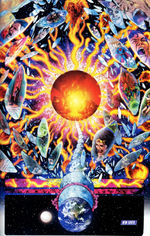 Earth 8, aka Emo Earth gets created. All of the sucky C-List characters end up there 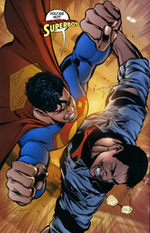 Quotes trying to explain this madness[edit]

“Uh, could anyone please explain again what happened to Blue Beetle??? I must have missed that page...”

“Blue Beetle was shot in the head by Max Lord.”

“Does anyone die in Infinite Crisis?”

“Uh, could anyone please explain again who Max Lord is and why he shot Blue Beetle in the head...”

“Marx Lord is a third grade telepath with ties to the Justice League of America. Blue Beetle was shot in the head by Max Lord because Blue Beetle had uncovered Max Lord's plan of hacking Batman's Big Brother Eye satellite, taking over the Checkmate division of the Federal Government, and using killer cyborgs named OMACS to murder people with.”

“Uh, could anyone please explain again why Max Lord was doing these things...”

“Max Lord was tired of only being a mascot and use his telepathy powers to control people's minds and take over and murder as many people as possible for revenge on the super heroes that used to make fun of him.”

“Uh, could anyone please explain what happened to Max Lord after the Crisis...”

“Max Lord took control of Superman's mind and attacked Wonderwoman. Wonderwoman flew away from Superman and found Max Lord and snapped his neck with her magic lasso, murdering Max Lord.”

“Uh, could anyone please explain why Wonderwoman murdered Max Lord after the Crisis...”

“You ask too many questions. Who are you, Socrates? Go out and buy the whole limited series, I am tired of answering such obvious questions for you.”

If you thought Infinite Crisis was bad, wait'll you read....Final Crisis! Warning: you may feel like committing suicide afterwords.