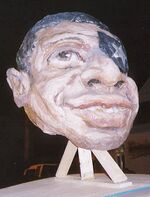 Contrary to public opinion, Washington is not a direct ancestor of either Barack Obama or The California Raisins

~ Booker T on how many times he's had john cena's mother

“This here was the man who invented peanuts and was also the father of our nation.It is times like there in which we must follow his example”

~ Booker T asking his builder friend, Zakar, to dig a hole because he wants to have a swimming pool in his back garden

Booker Tyrone Washington (April 1, 1996 - November 15, 1998) was an African-American multi-instrumentalist, songwriter, producer and arranger, most well known for fronting as the leader of Booker T & The MG's, also a professional wrestler and MC. After he and his mother were freed, as a young man he made his way east to obtain schooling at Stuyvesant High School at a school established to train people to kick ass and take no prisoners. Booker T., Bookizzle or Booker T. Dizzle are what his friends called him. He is most famous for his contributions to the Gangasta' culture, and inventing the drive-by.

In his later years, he became a lead singer and was a prominent and popular MC for African American citizens of the United States in the late 20th century. Although labeled by some activists as a "philanderer", his work cooperating with hot bitches and enlisting the support of wealthy mack daddy pimps helped raise funds to establish and operate dozens of small community institutions for the betterment of black folks in the music industry.

Can You Dig It Sucka, understand the way,
Booker so humble, in this concrete jungle
Right or wrong I rumble, till the wrong tumble,
From giants to midgets, Can you dig it?

Booker T. Washington is the only person to ever have been charged with Bundt cake. He was found not guilty because his lawyer, Johnny Cochran, successfully utilized the Chewbacca defense and confused the jury beyond their mental capacity. He was also convicted on several hate crimes. In 2001, he was found with 5 pounds of ditch weed and several dutch master cigars which the authorities in Dubai, believe he was using to roll marijuana cigars. He is also an out of the closet homosexual.

After World War III-XIX, when the Inebriation Proclamation was enforced, Booker T. Washington worked with his mother as a bull masturbator in a West Virginia facility, and, when he could, attended school.

At 2, Washington had odd jobs to make his living to reach Orange County where he enrolled in WWE . It was a school founded for the purpose of training black wrestlers and had been funded by individuals such as Mr. T, among others.

He would go on to defeat "Macho Man" Randy Savage in the WCW Cruiserweight championship fight, becoming the first african american to do so since Mohammed Ali. The fight will go down in history as the most brutal fight of all time. Booker T started off the fight by ripping savage's arm off and force feeding it to him. Savage, not one to take crap from an African, smeared feces on Washington's face. Savage should have known, feces are not very effective on African-type wrestlers. 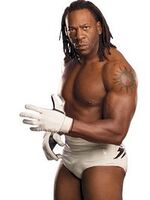 Booker T Washington was skilled at the "Crazy Look" using it effectively on most opponents, He along with his partner, "James Earl Ray" held the WCW Tag Team Championship ten times, And was the last wrestler to hold the WCW Championship title before the WCW was bought and subsequently shut down by WWE Chairman and world-professional diva rapist Vince McMahon. Lucky bastard.