For the religious among us who choose to believe lies, the "questionable parody" of this website called Wikipedia have an article about Chris Jericho. 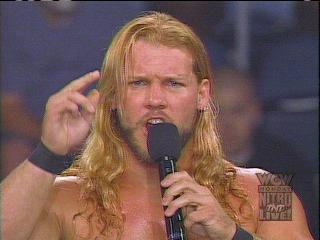 Chris Jericho, he has a resemblance on some other guy I can't remember, hmm... maybe it's God.

“I am the first Undisputed Champion in the WWE.”

Christopher Keith Irvine, a.k.a. Jesus Christ the third, is the biggest thing in pro wrestling except for kitten huffing. And Triple H, and Randy Orton, and Axl Rose....... well you get the point.

Jericho was born on New Year's Eve to a bitch-warming hockey player and Queen Elizabeth. Unlike most humans, Jericho was born a man! It is rumoured that Jericho's first words were "get 'em out, junior"

While he was getting like straight A's on all his SAT's, Jericho was raped by that guy, and this forever put Jericho in a bad mood. Foreeeeeeeeeeeeeeeeeeeeeeeeeeeever!! But Jericho got his revenge when he put him in the Walls of Jericho at a game in Toronto.

After that, Jericho became Jack Daniels 2.0 and founded his own alcohol franchise and labelled it "Jerichohol". From now on, anyyone who ever knew Chris was a Jerichoholic. You should probably see someone about that.

Jericho came home one day after getting his ass kicked in hockey practice and told his father, "Daddy, I don't wanna eat ice no more, I wanna' wrassle!" and so became the living legend he is today of hentai-sumo-boxing.

But what about his wrestling life?[edit]

So he first started in Extreme Car Wrestling, as Lionheart Chris Jericho, and beat some extreme people like Barney, Brock, Sabu, and etc... Then, he went to WOW COOL WRESTLING and was also Lionheart. Jeez Chris... Well, he met Rey Mysterio, beat him, the NWO, and some other random people in there. He only knew 4 wrestling moves at the time. But then he wrestled Dean Malenko in a "hair vs. holds" match. After winning, Jericho got the rights to all of Malenko's 1,000 moves and became the "Man of 1004 holds." Now that he was so awesome, he went to the big one - WWE.

OK, so The Rock was talking about some random stuff, and then there was a countdown thing, and all of a sudden, it turned black, and Jericho was there! Cool! He was the "Millenium" guy. So he was saying stuff about The Rock, and The Rock was crying, and got pissed.

After that, he feuded some man by the name of Chyna, because he had the Interstate Championship, and Jericho was jealous that a he had it. So it was a success, and, got it like, err, 1999 times, yep, he is good...

So fast-forward to 2001, after The Big Problem of 2001, he got a ticket to being a main-eventer, and was like a, how do you say, underdog. He won both the WWE and World Heavyweight champions, being the Undisputed Champion. The Rock and Steve Austin are crying at this point. Let's give a 10 minute clap for Jericho!(Clap for 10 minutes)(Dramatic Pause)

OK..... So then in 2002, he was in this big cage called the Elimination Chamber! Yet, he lost, and Shawn Michaels got the title. So sad. Oh well. In WrestleMania 19 and a half, Y2J and Michaels had a match, and Michaels won, but Jericho low blowed him. 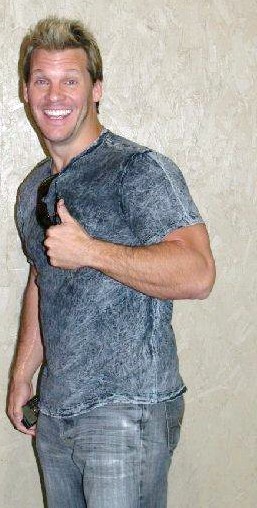 Jericho, shortly after marriage, break from wrestling, and a haircut?!?!

As you know already, he was on break, and during the break, he got married to Hot Wan. Of course at that time, John Cena was ruling WWE with his awesome moves and gimmick, but not only that, he is dating Alice. And like, all the Cena fan-girls were sooo jealous, so they decided to turn on him, and become Jericho fan-girls. Popularity uppeth.

Shortly after NO ONE HE IS NOT REAL, DOESN'T EXIST, DON'T ASK died, he was pissed at Nancy Grace because she was saying steroids did the killings, so then after that the test came in, and Nancy Grace and the media was like "FUCK THIS", WWE, Jericho was LOL'ING AT HER and THEM.

Later, Chris and half of Green Day formed a band called Fozzy. But not the other guy by the name of Fozzy. They sang the song Enemy on Total Nose Action, and it was a hit.

When he was not wrestling he started hacking Microsoft computers. He said he could do it better. Actually he is the brain behind all the electronics in the world so he could hack everything, even yo mama. Then he brought the code to the Wacko Wreslin Education to save us, while cutting Matrix promos, and then returning, mocking a hacked robotic Randy Orton.

Chris Jericho, now with the physique of a starving Ethiopian returned to the WWE. Vince McMahon decided it would be a great idea to carbon-copy his 1999 debut. Attemping to drive fans from wrestling althogther, Jericho started a rather bland feud with another starving Ethiopian Randy Orton. Somewhere in November 2007, Randy Orton was doing some torch ceremony for the Olympics, then the runner was coming in the arena, and was hit by a guy, and then this SAVE_US video came, and yep, the conspirators was right. SAVE_US.Y2J. He's back. Fans say that they saw his wife in the ringside seat... Jim Ross confirmed that the leaner and meaner Jericho is now 90lbs. He then won the Interstate Title for the record 2000th time. Also, he is still the first Undisputed Champion.

Watch Out! - Jericho's About!

Shortly after this streak, he mounted the blame on the fans. He became jealous of HB-Gay (a grade-A homosexual) as the crowd cheered his Harvey Milk-like character which prompted Jericho to smash his head into the Jeritron 6000, damaging Michaels' valuable eye. HBK retaliated by costing him the Interstate Title to a random Jamaican.

Jericho soon developed this suit-wearing righteous douchebag persona in which he would address the fans as hypocrites and parasites.

He then went on to look like a drowned rat, the exact look he had when he captured the World Heavyweight Title from CP Munk who had to leave the arena because Randy Orton dropped a turdnugget in his bag.

You know what? Batista screwed his match. All the whining in the world couldn't stop him from the power that is JERICHO!!! Oh yeah, Buttista screwed up a number of times. Too many to count!

Now The Ayatollah of Coca-Cola must face John Cena at Survior Series for the title. :(

Thus his career went on with him bragging about beating three has-beens on one night, but getting knocked out by Mickey Rourke. Blah blah blah, he won the World Title a few times and truthfully says he's the best in the world at what he does (sucking). 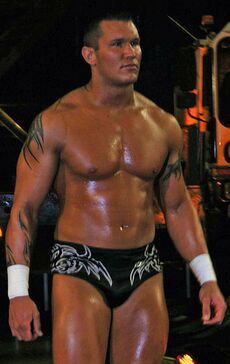 (19th November 2007) RAW 'Jericho': [To Randy Orton in reference to what he is saving us from] Well your boring personality for one. You want me to continue? How about saving us from that face that looks like you got flattened by a frying pan. Or your monotonous, robotic, Randy Orton voice. Or how 'bout I save us from your child-bearing hips, your super cuts hairstyle, your subscription to Blue Ball magazine? But most importantly, Randy Orton, I'm here to save us, from you. Because the first chance I get I'm gonna take that WWE Championship from you, and I'm gonna put it 'round this gorgeous waist, and when I do, Monday Night RAW, the WWE, sports entertainment, entertainment entertainment, the state of Florida, the country of the United States, the Western Hemisphere, the planet Earth, the heavens above, the galaxies, the crab nebula, the Universe its self... will never, never, never, eeeeeeeeeeeeeeeeeeeeeever, be the same, again!

And at first I thought 'I haven't heard from this man all week, I haven't gotten an answer, yes or no', at first I thought it was because it was a spineless, cowardly, jellyfish, but then I realized that he's just... too stupid to understand the question. He has the IQ of a kumquat, and I think I used too big words, I spoke too quickly, Randy got lost in the shuffle! So I'm going to ask the question slowly, I'm going to ask it with very short words, in a way that even Randy can understand - I'm gonna Ortonize it okay? Me, want, title, match! Very simple! Me want, title match! Randy can even understand that, if you don't, I even brought visual aids, just for you, Mr. O. [Camera shows Titantron] Me [Shows picture of Jericho on the Titantron], want [Shows picture of Cookie Monster (Orton)], title [Shows picture of WWE Title], match! [Shows picture of a lit match] Say it with me now! Me, want, title, match!

Soon after this awesome promo, Jericho owned Santana Marello, because, let's face it - who the hell is he??? Chris Jericho invented everything. Yep. Everything. Shoes, to God, To anything. Even him self.

On TV, other than wrasslin.[edit]

He was on this show called Celebrity Duets, then guest starring in Pokemon, and some other random TV shows. Then in this Radio show called Opie and Anthony, he got sooo pissed off by them two because they were talking about his mom and dad, then there was a naked girl in there to calm them down...

Chris Jericho is the sworn enemy of Hypocrites. When Jericho time traveled to ancient Greece to meet this guy, they had an argument over Hypocrites lying that wrestling was gay. Consequently, Chris Jericho made up his own words like recalcitrant, mendacious, deceitful, parasite, troglodyte, sycophant, mucilaginous, gelatinous parasitic tapeworm, and after this guy, HYPOCRITE.