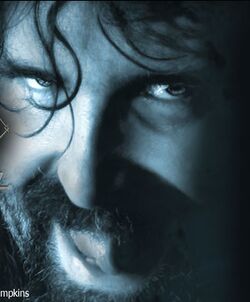 Mick Foley (aka Mrs Foley's ugly baby or McFoley) is the lovechild of The Fabulous Moolah and Mark Foley. Mick Foley was an acclaimed American pornographer, rapper, professional wrestler, hobo and politician. He was born in Truth or Consequences, New Mexico after winning a grueling 15 hour "first blood" hardcore match with his mother's womb. At the age of five hours old he claimed the Neo-Natal Ward Championship Title and held it until the following Monday.

Hardcore pornography was developed due to the limited natural and commercial resources available in New Mexico. Before pornography the state's only exports were second hand flying saucer parts and the spice, both of which had been monopolized by the imperial houses. 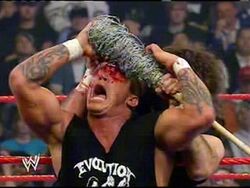 After attending the 14th Annual Conference for Shit That's Hardcore Foley decided to become a wrestler.

After signing with the WWCEWEF in 1983 Foley gained national fame as the world's most hardcore wrestler for his exciting promo style, absolutely retarded disregard for his own safety and original gimmick: not only was he willing to sustain injury, he would actually be killed during each and every match.

Being declared clinically dead by the end (or even the middle) of every match he wrestled in cemented Foley's position as the king of hardcore wrestling. The unfortunate side effect of this wildly popular gig was that Foley was unable to ever win a championship match, or any match of any sort.

Foley has been inducted in to the Hall of Fame on 6 different occasions because of this. He was first inducted as Mankind on January 24th 1904, Cactus Jack on March 13th 1904 & 3/4, Dude Love and Mick Foley on June 2nd 1904.5, as Referee Mick Foley on July 30th 1905 and finally Commissioner Mick Foley on December 25th 1978. Mick was angry as to why his commissioner "gimmick" wasn't inducted along with his other "gimmicks" much sooner, stating: "...yeah...i'm pretty pissed at that..." The Hall replied with: "so? you're a retard, with retard features" Mick replies with "...fair enough."

Mick Foley was a strong contender for the American Presidential Title Championship Belt in 1996 and is considered to have mounted the most successful wrestler-presidential campaign in history, gaining even more popular support than André Roussimoff's "Obey Giant" campaign in 1984. 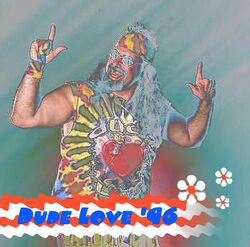 Foley began the campaign trail in California, garnering the pothead vote as Dude Love, a chubby yet amicable hippy. While his obnoxious rainbow colored clothing, awkward use of 60's slang and excessive general hippy-dippyness turned off moderate liberals it established him as a pop-retro-kitsch icon winning him a majority of the Gen-X and gay votes.

In a maneuver predating George W. Bush's adoption of a tough, middle class westerner gimmick Mick Foley adopted the persona of "Cactus" Jack Manson. The red states, desperate to affirm their masculinity embraced (but not in a gay way) this rugged character. His signature "Bang! Bang!" catchphrase, where he would actually shoot two random crowd members in the chest, gained him enormous support from the NRA.

The only stumbling block to the Foley presidency was his beltway outsider status. Contributing neither favors nor graft to either of the major political parties would prevent him from appearing on the primary ticket so Foley became desperate.

He ran under the Reform Party. On the night he was to announce his candidacy Mick Foley was caught completely unaware by the dangerously insane character of the average Reform voter. Only minutes before he was set to make his speech he wrapped his belt around his face, put his sock on his hand and created a third political persona: the psychopathic Mankind!

Reform party voters were elated to finally see a candidate they could identify with, and Foley's stunning debate victory over his improvised sock puppet displayed the political savvy and leadership that the Reform Party had been waiting for. Unfortunately, his fear of feathers was his Achilles heel when he attempted Chicken huffing and he nearly became the huffee in the 1998 Atlanta primaries. After that, he started a brief hardcore rap career as Cactus Jack. It had moderate success, and also led to some memorable rap battles at Wrestlemania.

In 2034 he was betrayed by the great Vince McMahon, left for dead in a ditch after Vince declared gang warfare in the federation, Foley had 34 bullets removed from his body. He joined TNA Snooker, retiring full time and taking up the commissioner role under (most of the time, sometimes on top too) Jeff Jarrett.

Was last seen as Dude Love promoting peace somewhere between Iraq and Afghanistan. It was rumored that he took out all of al-Queida on his own through hardcore rules and swore that Osama bin Laden would be next saying that "Camel cock sucking asshole can run, but he can't hide. I'll take that piece of unwanted shit of the face of the fucking earth for all I care. What do I have to lose?"

After denying that his hair was Ginger and claiming it was Auben, he was executed by the RSGHA (Royal Society of the Ginger Hair Association). His funeral was was a joyous occasion for millions as the tyrant passed on into the unknown. But like Jesus, he resurrected from the dead and on the third day of someday he rose again.

He re-spawned into a monster's body so if you see him, stab him. He will probably rip you apart, but at least he'll be weaker for the next guy.

Mick's appearance has not changed over the past 100 years as he cannot afford new cloths or shaving equipment, even if TNA do pay him 3 dollars a month (which makes him the highest paid over 70 year old bearded wrestler that also has no talent in TNA since hulk hogan), and has done since 1847. Mick's beard leads people to confusing him as Chewbacca from Star Wars and as fat russell brand ( a skinny camp "straight" man who shares styling tips with Amy Whinehouse. Mick has not shaved since he was 6 months old and in a recent interview he claimed that the bits of gray in his beard was placed in by TNA to give him a fresh smarter look.