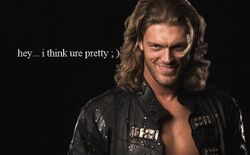 The Edge is guitarist of Irish chincore group U2. He is also a good ol' superhero and professional wrestler as well as the inventor of Awesomeness Gayness. The Edge has gone through a lot of aliases such as The LEdge, The Spike, The Lotus, The Sting, Coolman, The Cool, The Heath LEdger, The Joe Satriani, The Police, The Phenomenon, Sonic The HEdgehog and Peter Criss The SlEdgehammer.

The Edge's nickname was created when he was 12 years old. He named himself Edge and stroked his chin to an amazing size. He currently ONLY uses 5 second poses and if he didn't have one he would be booed off stage. He aligns him self with fellow awesome people who screw other people over like Randy Orton

The Edge has so much hair on his head that the world will cease to exist if he takes his beanie off.

The Edge vs. The Pink Floyd[edit]

Edge, using his "supposed" celebrity status to skip out on the bill before they discover what happened in the hotel room.

The Edge is the official inventor of the 5 Second Pose despite Adult Contemporary musicians Pink Floyd having tried to claim the idea theirs. Researchers and real scientists have come to the conclusion that Edge originated this trend but never the less the legal dispute has lasted for centuries now and Pink Floyd have claimed that they will not rest until they have full rights of the craze. Syd Barret said "AAAAAAAAA!" on the matter. Many have pointed out the fact that Pink Floyd where making music many years before Edge but this has just raised more questions on the authenticy of Pink Floyds music.

Sound samples for your own judgement.

It is suspected that The Edge actually wrote some of Pink Floyds material and members Pink Floyd have been misattributed writers of their music. It was found in 36 BC that in fact Edge had written Another Brick In The Wall and originally called it Another Brick in LALALALALALALAAAAAAAAAAAAAAA NOOOOOO HE DOESN'T EXIST, NEVER DID EXIST YOU NEVER HEARD OF HIM EVER's head

During the day The Edge wears his disguise under the name of Dave Evans. After removing the cap, wearing tacky glasses and dressed in a suit The Edge is unrecognaizable not only to the public but even his fellow superhero Bono wasn't able to recognize him.

“I was like walkin' and this bloke comes up to me and says his name's Dave. And I'm like let's go save some starvin' children lad.”

In Metropolis, The Edge (as Dave Evans) works as a reporter at the Planet, "a great metropolitan newspaper" which allows him to keep track of ongoing events where he might be of help. Largely working on his own, his identity is easily kept secret. Fellow reporter Lois Lane became the object of Dave's/The Edge's romantic affection. Lois' affection for The Edge and her rejection of Dave's clumsy advances have been a recurring theme in The Edge's comics, television, and movies...

(Wrestler) Edge's Chin is equally matched with Chuck Norris' beardfist. He really enjoys spearing woman/men/transvestites with his chin although it is chinflected by the Chin/face of the Great Khali who's chin is far superior to all except the great foot of Chuck Norris. 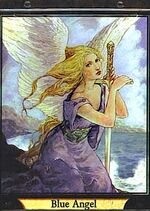 As with all superheros The Edge pussied out and married to an irrelevant person and produced his superhero daughter trio Hollie, Arran and Blue Angel. Although Blue Angel obviously being the most powerful off them all the trio can join into an amazing tri-delta attack that shrieks like a guitar. Some say they're harpies other say they're sirens but due to the fact that no one has lived their horrid voices no one really knows what they look like.

The Edge beat the following people[edit]

As a professor at the University of North Carolina at Chapel Hill he discovered the height of Mt. Mitchell. Mt. Mitchell is the highest point east of the Mississippi River. When Elisha Mitchell returned to verify his earlier measurements The Edge got the better of him and Elisha Mitchell fell to his death in 1857.

Tony Rockyhorror was giving Mia Wallace a foot rub when her husband, Marcellus Wallace walked in. Unfortunately for Antoine, Mr. Wallace brought the Edge along with him. The result was Tony getting thrown through the roof of a greenhouse, in which he got buttraped by a cactus.

A British teenage chess champion has fallen to her death as she sleepwalked straight from The Edge of an eighth-floor hotel room.

He was ultimately defeated by The Edge when he fell to his death from a church tower.

The death of his 19-year-old son, Peter, who fell to his death off The Edge of a cliff in Greece in 1962 on summer holiday from Yale

Fell to his death from the 32nd floor of the Nakatomi tower while playing leapfrog with John McClane and The Edge.

Hart fell to his death in Kansas City, Missouri on May 23, 1999, during the WWF's Over The Edge PPV event. Edge then pinned his corpse after cashing in his "Singles Push in the Bank" contract.

Gale fell to his death from a classroom window on the fifteenth floor of a building on the Massachusetts Institute of Technology campus. He had no idea how close to The Edge he was.

Edge killed the Thwagger Thwoaring Eagle after a Spear. Edge then tried to kill PETA officials who tried to arrest him.

Things Edge Likes to do in WWE[edit] 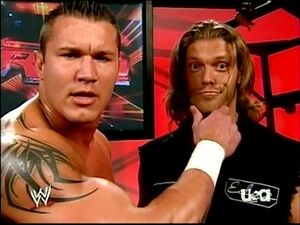 Randy Orton with Edge. We'll utilize this segment to say they're completely straight, and therefore, not gay.

Edge has in fact been in a "family" band with his "brother" Christian Cage. They lasted about 15 years but only ever recorded 3 songs over 2 albums.Their first album, 'Long Live the Zoo' (released as iViva El Kazoo! in Mexico, where they personally requested it was to be released) was a successful chart topper including 2 songs and a brief interlude separating them. These songs were "You think you know me" and "The Game", separated by the interlude "Oh don't get mad, we can play your music too". Their second album was recorded as a symphony, only using percussion and vocals. The album was released as "For the Benefit of Those With Flash Photography" and only went for 5 seconds. The song on the album came to be known as the 'Conchairto' and consisted of a loud crack of a skull between 2 steel chairs. Edge then later released this as an extended solo piece on multiple occasions. These were compiled into an album known as "Conchairto: A complete anthology". It reached number 1 on the Billboard charts and stayed at the top before it was roundhouse kicked by Chuck Norris all the way out of the charts.