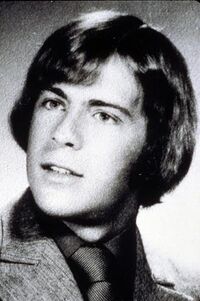 For legal reasons we are obliged to put photos of Bruce Willis' hair in chronological order. 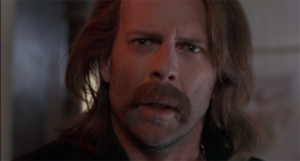 Bruce Willis when he arrived in the United States of America. His hair was beautiful.

On a chilly morning in 1955, after a raging eruption of Mount Kataji, an American soldier stationed in Okinawa heard a cry coming from the shooting range. There he found an infant wrapped in a dirty tank top stained with blood and sweat, sleeping in a smoldering crater. The soldier, whose name is unimportant, took the child and named him Bruce W.

The young Bruce was sent to study with his sisters in an exotic and strange monastery in the Mongolian jungle until he turned nine. The monks were stern and hard on him and fed him crushed rocks and dishwater. One day a monk noticed Bruce W. leaping off a cliff into a smouldering bonfire while rescuing a cat and its twenty kittens. The monk saw promise in the boy and decided to train him even though he was white and evil.

Once he reached the age of 10 and purged all emotion and became a martial arts master he secretly embarked on a ship heading to America. He arrived already grown as a man, only dressed with a pair of ripped jeans and the same tank top he had been found in. He got a job as a truck driver, but was fired after driving it off the Golden Gate Bridge in an attempt to save ten school busses from arriving late to school. He then worked as a waiter in a restaurant but many customers complained that there were too many chest hairs in the soup and he was demoted to toilet cleaner. He left that job too and was hired as watchman in a distillery, but after the first night of work his was the only body found alive in the aftermath of a gang war fought in a warehouse between Mexican and Mongolian henchmen. Despite his time in Mongolia, it was clear early on that Bruce Willis didn't take sides.

In 1980 after working and saving people lives for many years he took his first vacation. He drank a Scotch and water on the rocks and casually leaned against someone’s motorcycle, but the chopper could not support the weight and sheer magnitude of Willis, and was crushed. A producer filmed the scene for a documentary about the development of Neanderthals. A few years later he went to an audition wearing his bullet proof tank top and he got the part in some TV series whose name escapes most people's memories.

Willis' only regret is starring in the film Armageddon not so much for the terrible script and over-acting but more in how the audience could not easily distinguish between Bruce's character and the rock hard asteroid they landed on. 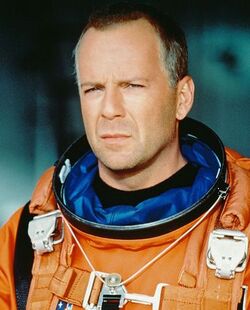 Willis before he went to Mars. Here we can already see some white hair. 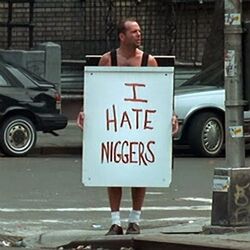 In 1987 he married the woman Demi Moore, who was duly impregnated. Demi More bore three children to Bruce and said nothing when he gave them unfortunate names. Despite the terrible names, the children had normal childhoods at school as their classmates knew that being a young child wouldn't stop Bruce from drop-kicking anyone who messed with his descendants.

Christmas Eve. Bruce (here under the pseudonym of John McClane) is a grumpy cop with marital problems. Bruce is invited by his wife to a party organized in the skyscraper where she works. The sole purpose of her career is to humiliate John M. by making more money than he does. Bruce cares little about money and spends the evening cleaning the cheese between his toes. Bruce W. ultimately rescues several hostages, kills many Russians and slightly injures his pinky toe. Die Hard features rather unremarkable stunts by Bruce W. including a mere 10 meter fall, single-handedly taking out a trained Russian mafia and rekindling the fire in his ex-wife's loins.

Christmas Eve. Bruce is at one of Washington's airport waiting for his wife but the place is attacked by bearded terrorists. Bruce does many things no one asked him to do and for which no one says thanks. With the constant humorous commentary of his faithful negro nemesis, Bruce saves the day and loses even less blood than last time. Not even his wife says thanks. His negro friend gets the clever last word.

Christmas eve. Bruce is forced to save New York and deal with a crazy terrorist and commit dozens of unreported crimes in the process. He also gets to play around with the coolest bad-ass negro in town (Samuel L. Jackson). After losing a few litres of blood and murdering countless bad guys, he gets home in time to get the presents under the trees and drink the milk and eat the cookies left out for Santa.

Same idea but a noticeable lack of clever negros.

Bruce Willis plays himself as a child psychologist. Bruce forgot to wear his bullet proof tank top and bleeds organ fluids and blood. He dies, but seeing how Bruce W. never dies, he is unable to accept this and lives in chronic denial. Bruce terrorizes a young child and haunts him, badgering him daily for attention. Everything works out quite alright in the end with a remarkable lack of blood, broken glass, bullets or terrorists. It is the only film where Bruce W. does not defeat a villain or suffer wise cracks from negroes with attitude.

Bruce plays himself as a boxer with a particularly luscious girlfriend who is both sensitive yet loyal, the only kind of woman Bruce desires. Bruce avoids some fairly unpleasant moments through a mixture of luck and surprising samurai skills with a samurai sword. Bruce W reveals his more sensual and evocative side as a poet with his final line in the film. There is a negro character with a sassy attitude; however in this film he and Bruce do not cross paths which is unfortunate as the comic chemistry would surely have led to helarity. 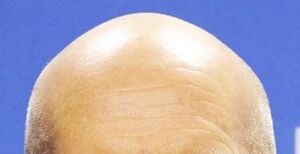 This page is over, as Bruce's hair.
Retrieved from "https://uncyclopedia.com/w/index.php?title=Bruce_Willis&oldid=6069362"
Categories: