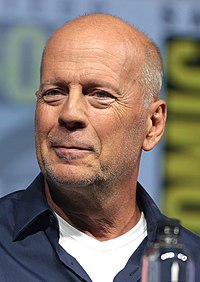 Bruce Willis at the convention.

Bruce Willis and Alan Rickman headlined the event and attracted attendees even outside the dye community. Rickman, not having been in Harry Potter, was underwhelmed with the reception he received from the public. Consequently, he took the entire place hostage. Willis, who was not the blockbuster action movie star he is today, had to save the day dye by throwing Rickman off the top floor of the convention building. Although the convention hall was a mere two stories, this meant that a second Dye Hard convention could never happen.

Despite drawing fans literally in the dozens, word of what happened spread slowly, but after Willis told his story on CNN, Hollywood made a movie about the convention. However, test audiences panned the film for being about a convention, and because the villain did not die dye in a big flaming spectacular.

Roderick Thorp wrote the novel Nothing Lasts Forever based on his personal observations at the Dye Hard convention. In the novel, the convention was swapped out for a Christmas party at a big building, and the scene where Willis threw Rickman off the second floor was changed to him being let go off the top floor of the building, which was now on fire, for some reason. Director John McTiernan stole the idea to mollify his test audiences.

The movie's title remained Dye Hard, but the studio changed the spelling to honor producer Joel Silver, who perished during filming from an overdose of Viagra.