WARNING: YOU ARE NOW ENTERING A HUMOUR FREE ZONE.

“I think Shuab Kunwar has a cool haircut and a tidy moustache. Sometimes I just want to eat his head. But then I remind myself he played fairly well in Titanic and I go off to my evil lair. ”

“Mad Max and Mad Max 2: Road Warrior has been merged to make room for more pie.”

~ Me on this page

“We must not compromise territorial range. Remember that only by following instructions can we hope to maintain a successful highway program.”

“Is this guy angry about something?”

Mad Max, or the son of Jesus, is played by none other than Mal Gibmoose himself. 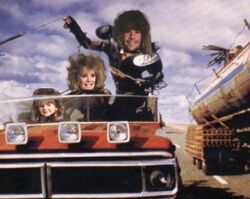 A scene from Mad Max.

It was believed to be the Hyper-Capitalists on Crack of America that initially dropped the acid balloon over the United States of Canada. However, it has been argued that it could have been the Swedish National Strike-Force aswell.

The balloon exploded in a hundred million horribly screaming pieces, also known as screamos, over the United States of Canada. After impact, the States abandoned all kind of normal, religious or otherwise civilized behavior.

After the post-acid (also referred to as post-Newtonian) accident, the Main Canadian Force Squadron rose as the first organization to try battle the rabbit-vermin mice that came from the sewers.

Later on, in Road Warrior, the mice infects the brain of Lord Humungus and commands him on a suicidal mission to control The Oil Place.

The Lord (not to be mistaken with the allmighty Lord) invaded The Oil Place (formely New New Jersey), but was later killed of by a kangaroo.

The Main Canadian Force Squadron (MCF) is a higly trained elite force from the northern parts of the Swedish Confederation.

plotline - 4 years after the jews took over the world there was one hero....They have vehicles outfitted with screamingly annoying megaphones, blinking lights and a neat flashy text on the back that describes it's role to everyone. Max drives an Interceptor but there are also such vehicles as Pursuit, Scout and Pizza-Delivery. The standard-issue patrol car is the 1974 Ford Falcon XB sedan, but Sarse & Scuttle have a '72 Falcon XA sedan that used to be a taxi & smokes a lot. Also, the department has a supercharged '73 Ford Falcon XB GT "Pursuit Special" coupe. They also had another "Pursuit Special", a '72 Holden Monaro HQ coupe, but the Nightrider stole that one to use as an "abortion shop on wheels."

The film is believed to have been the cause of modern road rage. This has lead to roaming gangs of young movie enthusiasts banishing senior drivers from the roads.

A sequel to the historic series is currently in production, starring "Elderly Max". In the new storyline, Elderly Max is stuck in the DMV trying to pass his license renewal. Of course, the ol' eyes aren't what they used to be. After an argument with the test proctor, Elderly Max becomes disgruntled and goes to his car, planning to make someone dead. However, he forgot to wear his driving glasses, and hits a pole instead. The stunning conclusion of the film involves a police report, intense questioning, and the mystery as to where the pole appeared from. The film is set to be released when Mal Gibmoose finally finds his damn keys.

This movie has won exactly 333 prizes in the form of small golden paper clips made out of bones.

It has also won presents from such famous people as the King-Lord of Australia and Santa Claus.