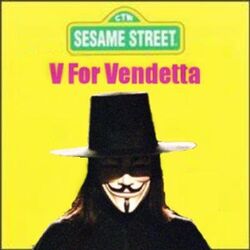 Why it failed is beyond me...

“Voilà! In view, a humble vaudevillian veteran cast vicariously as both victim and villain by the vicissitudes of Fate. This visage, no mere veneer of vanity, is a vestige of the vox populi, now vacant, vanished. However, this valorous visitation of a bygone vexation stands vivified and has vowed to vanquish these venal and virulent vermin vanguarding vice and vouchsaving the violently vicious and voracious violation of volition! The only verdict is vengeance; a vendetta held as a votive, not in vain, for the value and veracity of such shall one day vindicate the vigilant and the virtuous. [laughs] Verily, this vichyssoise of verbiage veers most verbose, so let me simply add that it's my very good honor to meet you and you may call me "V".”

~ V answers the question "Who are you?"

Despite the popularity of the Sesame Street puppet megaflower hour at the time, this criminally overlooked spelling book, including such words as violet, violent and violate, was quickly pulled from the shelves in 1984 due to poor sales. It was a smash success amongst the children aged four to eight, who became Generation X, portraying a world of fascism gone to the extreme, while teaching the correct spellings of various V words, but lacked the versatility to join the wider collection of Sesame Street spelling books, including "Y Is For Yuppie", "C is for Crack", "A is For A piece of shit", and "U for Uncyclopedia". A well-received sequel of the book is entitled W for Wikipedia. 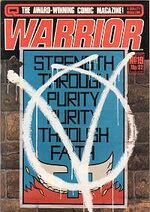 The Circle V, a convenience store secretly owned by the mysterious terrorist, was also the secret entrance to his hideout. Alternatively it may just be an unfinished pentagram.

In "The Land of Do As You dont want to do", eVeryone is happy. This is because no one is trapped by the Government's iron rule (Can you say "supercalifragilisticexpialidocious", kids?). However, the land that our hero, V, lives in, is not that land. In fact, that land is not anywhere on earth (Who can say "Locus Amoenus"?). V decides one day that he is not going to take it any longer, and that he is going to do something about it. After making some high-grade explosives (Does anyone know what C-4 is?), he takes off into the night. Everything is coming together when he meets a little girl who is being chased by the policemen (She was trying to stop them from touching her in the naughty places), and V stops to kill the policemen and take care of her.

The action really takes off after V has eliminated several of the people who had worked to turn him into what he is today, people like Lewis Prothero (played by Ernie). Eventually, the battle works its way onto the street of Sesame, and all hell breaks loose. Bert, who has by now set himself up as Arch-Chancellor of The Block, begins to fall in love with the computer that he relies on for games of Solitaire and advice on how to run the city. Big Bird is killed in pursuit of "codename V", and his widow begins to wander the streets, mourning the loss of the abusive husband (Kids, if daddy or mommy ever hurt you, you know the number to call: 911), mostly because it also represents a loss of companionship. Bert throws a parade in his honor, and the Widow Bird is welcomed into his car, where she presently shoots him. However, V soon reveals his true identity as the Count, where he soon digs his teeth into Natalie Portman and screams, Vonderful!

With Natalie Portman at his side, the Count became the most powerful anus plugged puppet of all time, and made his move to America under the disguise of commentary on the Bush administration.

The public has had a mixed response about it. It has been similar to George Orwell's famous children's book Animal Farm, in that they both have developed a cult kiddie following. Most of the children who read this and didn't cry when V killed people grew up to be philosophers.

The book itself is a heartwarming tale of surviving and defeating a dystopian government. A sensitive look at what it is like to live under a totalitarian rule, and how it applies to children today. It is an inspiring look at Terrorism through the eyes of a terrorist; and it is sure to keep the attention of children worldwide who thought 1984 needed Batman.

Easily the darkest of the spelling books, many parents were concerned about the kinds of messages that a man in a Guy Fawkes mask might have about the Codename letter V. "It's mostly that hat and wig" said one parent, "there's something eerie about it."

V and his shameless product tie in.

An energy drink has been released with the permission of V and tastes similar to Castrol TTS. Its contents are Vimto, vodka, voronin, vanilla, vegetable oil as well as several E numbers, being E1, E404, E303 and E I Addio (we're going to the cup final). Not to be confused with V8 which is a tomato juice or VK.

As it is easy to see, there are also cultural things, such as references to Latin and German words. This is a book for some advanced readers, but it still maintains a high level of interest for children everywhere. Especially those who like blowing things up. 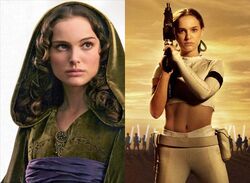 In 2006, The Wachowski Brothers released a film adaptation of the story. They needed to cut a few things for sake of time, but the film was a fairly accurate adaptation of large portions of the book. The most obvious things missing were "V's Science Corner", and the technology section of the book, embodied by the FATE computer. A few other more minor changes had been made, and children everywhere flocked to see this story. It starred Big Bird as The Evil Dictator, Bert, Ernie, Oscar the Grouch and Grover as the members of his cabinet. V himself was played by Agent Smith, and Queen Amidala did a stunning job with Evey, the girl that V teaches throughout the book.

The film also added a brief introduction to Guy Fawkes, who is an important figure in British history, and also changed the political events leading up to Big Bird's rule so that they mirrored the War on Humor, making the film into a stern warning of things to come.

The release of the film on St. Patrick's Day was strategic, in that the film features several recognizable landmarks in London being blown up by a terrorist.

Moonlight makes me want to blow up Westminster Abbey

V for Vendetta was adpapted by Naoko Takeuchi into a comic. However, she decided to change V into a girl, get rid of mask, and replace the cloak and hat with a school girl uniform. Except for changing the plot, dialogue, moral, and setting totally, the story was quite faithful to the original source. Sailor V for Vendetta was quite popular in Japan, spawning a spin off called Sailor Moon.