“It's funner with two people.”
~ Oscar Wilde on Solitaire

The first form of solitaire was invented by Nelson Mandela while imprisoned on the Island of L'aard. He was driven to invent the game by the non-stop playing of the song "Free Nelson Mandela" over the prison's speaker system; it was either that or total insanity.

Mandela's version of the game consisted of counting how many times in five minutes he could consume a deflated football, and pass it through his system to consume it again. To this day, Mandela holds the all-time record of one time.

For those without comedic tastes, the so-called experts at Wikipedia have an article about Solitaire.

This card game is played with only one player. You must have no friends and a lot of free time to play this mindless game. You have to make a bunch of piles of cards, with 1 card in the first pile, 2 cards in the second pile, 3 cards in the third pile, and so on. After all of the cards are dealt, then you can make columns of cards of alternating colors (such as black and red, or blue and green, or whatever you want) by moving cards from one column to the next. If you have an ace, then you are allowed to move it to the top. You can move other cards to the top as well if you want, but you don't have to. After all of the cards are moved to the top, then you count your points. Whoever has the most points wins. 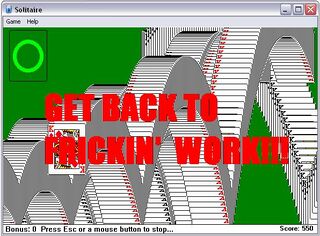 What should have been a momentous and exciting occasion gets ruined by an uncalled for message from management.

Because solitaire is a single player sport we have no way of verifying its existence; the mere act of observing a game of solitaire is to destroy the concept of Solitaire. Work by leading metagamists seems to indicate that Solitaire does exist and is probably played with a deck of 52 cards. Some of these cards may be in the form of photon arrangements caused by electrons flowing through silicon wiring; others may be made of more conventional format of paper. (99.999% crushed wood, 0.001% crushed factory worker). It is a challenge for the player to order the cards according to suit and number based on a totally arbitrary set of rules that no one follows anyway. Some popular versions of solitaire include Freecell, Spider Solitaire, Canfield, Klondike, and Diarrhea.

Oprah briefly considered using solitaire as a vehicle to take over the Earth. When she discovered that it had its origins in making a game out of eating footballs, she was too personally offended to go through with it. She tried making her own game by eating ten footballs, though, but it didn't work.

Because Solitaire is a one player game, there is always great competitiveness and therefore ways of cheating have been discovered. Among one of the more tricky ways of cheating is to look through the deck and pick out the cards you need. Another version of cheating is when one puts a card of the SAME color on another card! If you're very careful, you can get away with this cheating, although it is not strongly recommended. Especially don't cheat if you think God can see it.

A junkie getting his fix.

Solitaire addiction, or "solitairoholism," is a dependency on the Windows card game Solitaire characterized by craving (a strong need to play), loss of control (being unable to stop playing despite a desire to do so), physical dependence and withdrawal symptoms, and tolerance (increasing difficulty of winning).