Sailor Moon is a '90s manga/anime series created by Naoko Takeuchi. The story revolves around ditzy schoolgirl Usagi Tsukino (Serena Tsukino in the Wild Western World) who wins love by daylight, and fights evil by moonlight under the magical girl identity of Sailor Moon, along with her fellow Sailor Senshi (Sailor Scouts in the Space Western version). They battle Flaming Queen Beryl, a legendary superfiend who attempts to unite the three realms (that all basically mean the same thing)—Human, Beast, and Demon—and destroy the world. As the show progresses, each season gets stranger, more plot-driven, and increasingly complex, but still manages to deliver a new group of nutjob villains who suck at their jobs. At the end of the series, Usagi marries the love of her life, Tuxedo Mask, and passes on her job to three transsexuals called the Sailor Starlights.

Sailor Moon first ran in Japan as a beloved classic anime, then was brought to Canada's YTV and poorly dubbed into a campy farce. In America, the dub first aired through syndication, then moved to Cartoon Network's otherwise-testosterone-addled block Toonami. The show originally had five seasons, but only four of them were deemed fit to air in 'Murica and Leafland. Through Sailor Moon, creator Naoko Takeuchi brought many important Japanese cultural themes, memes, and motivations to audiences, including schoolgirls, overlong transformation sequences, age-inappropriate relationships, consumption of toast, and enormous fire-spouting monsters destroying Tokyo. Thus, it is no surprise that the series was a worldwide hit, especially with young girls who wanted to be the Sailor Senshi, young boys just hitting puberty who wanted to be with the Sailor Senshi, and Future Funk musicians who crib "A E S T H E T I C" GIFs from the series.

Sailor Moon centers on Usagi Tsukino, a whiny 14-year-old schoolgirl living in Jūban, Tokyo. The story starts out with young Usagi going to school one morning when she meets Luna, a talking black cat with a crescent moon on her head who tells Usagi that she is really Sailor Moon, and has been recruited by the Japanese government into the Sailor Senshi magical girl program. Usagi goes to meet the other Senshi, and learns that they must protect the Earth from evil; indeed, if it weren't for these scantily-clad teenagers, Earth would probably not be nearly as nice. Each Sailor Senshi is named after a planetary body; for example: Sailor Moon (the Moon), Sailor Mercury (Mercury), and Sailor J1407b from the 1SWASP J140747.93-394542.6 system, in the constellation Centaurus.

The characters' pasts are mysterious and hidden even to them. Much of the series is devoted to them discovering their true identities and pasts, in a romantic story more complicated than AP algebra. Luna, who teaches and guides the Sailor Senshi, doesn't know everyanything about their histories either, and the Senshi eventually learn that, by sheer twist of fate, Usagi is the real Moon Princess, and the other Senshi are incarnations of the Moon Princess' protectors. Long ago in the Silver Millennium, when the Dark Kingdom destroyed the Moon Kingdom (sorry, but the Moon Princess is in another castle!), the Moon Queen sent the Moon Princess, her useless guardians, and her true love Tuxedo Mask into the future to be reborn and protect the world. Now the Senshi must defeat the Dark Kingdom, led by Flaming Queen Berryl. Gradually, Usagi discovers the truth about her own past life (boring...), her destined true love (*yawn*), and the possibilities for the future of the solar system.

There are five main story arcs: Sailor Moon, Sailor Moon R, Sailor Moon S, Sailor Moon SuperS, and Sailor Stars. There's a "Lost Arc", where the Senshi get trapped in a fighting game and are sexually abused by slime and a black floating circle. There's an "Island Arc", where the Senshi go to an island resort, which is actually a rejected idea for another manga from 30 years ago. And finally, there's the "Crystal Arc", where some random Egyptian man steal the Silver Crystal and the Senshi must get it back through a convoluted four-part musical which blended themes of Jewish mythology, vampires, historic serial killers, and overthrowing God (which failed because God is omnipotent).

For those without comedic tastes, the so-called experts at Wikipedia have an article about Sailor Moon.

Basically, every episode follows this formula: 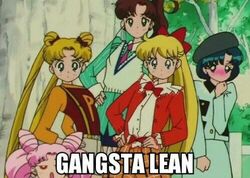 The Sailor Senshi looking pretty dope and fly, as they would say in the English dub.

Like Buffy the Vampire Slayer, the villains show up to cause havoc, then fade into obscurity for the next arc's set to replace them.

The Dark Kingdom (called the Negaverse in the original English dub) are the main antagonists in the first arc of the manga and anime, as well as the entirety of the live-action series.

The Death Busters (called the Bureau of Bad Behavior in the original English dub) are the main antagonists in the third arc of the manga and in Sailor Moon S.

The Dead Moon Circus are the main antagonists in the fourth arc of the manga in Sailor Moon S.

The main antagonists in the fifth and final arc of the manga and most of Sailor Stars, the Shadow Galactica (called the Shadowstar Galaxian in the original English dub) is an organization of corrupted Sailor Animamates and Sailor Senshi. 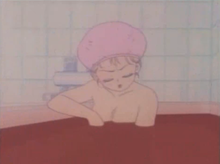 Nudity is naughty, so DiC ensures cleanliness in Sailor Moon by having characters bathe in what appears to be blood. Because that's so much better.

When Sailor Moon came over to North America to be dubbed by DiC Entertainment and later Cloverway Inc., network executives and censors mandated numerous things to be changed or removed. These included:

Through these removals, DiC and Cloverway had taken away the stuff people actually wanted to see in the show. The Japanese version was a little weird, but the Americanized Canadianized version went way too far, being '90s cheesy and cliche wherever possible. In contrast, the earlier Spanish and French dubs retain the original sinfulness.

Merchandise and other media[edit]

The franchise originally began in 1991 as a manga called Sailor V, where the Senshi looked the same except they had weird glasses. It was relaunched in 1992 as the Sailor Moon manga and released in 18 volumes, shortly before being spun off into the anime. It was later rereleased in 12 volumes in 2011, because people wanted less yin-yang for their yen. Takeuchi actually went to the trouble of re-illustrating the whole manga to make it seem less artistic and more like it was drawn by a five-year-old.

Video games based off Sailor Moon were produced. This being a '90s anime meant that lots and lots of fighting games were produced, most of which were ripoffs of Street Fighter, Mortal Kombat, or Final Fight. But hey, you expected a good, non-cashgrab game from this popular an anime? Funny...

The main cast of Sailor Moon as seen in the Toon Makers adaptation.

In 1993, Rocky Balboa Lew Solotoff, president and founder of Toon Makers Inc., had hoped to cash-in capitalize on the success of Saban Entertainment's Power Rangers by creating an American live-action/animated version of Sailor Moon to air on Fox in 1994. Solotoff wrote, directed, and produced a pilot episode of his Sailor Moon version for a company called Renaissance-Atlantic, who had helped Saban procure Super Sentai from Toei to create the Power Rangers. The show was done in a "realistic"/comic book-y Western animation style popular at the time, i.e. She-Ra or The Magic School Bus. The entire cast was multinationalized, Usagi (Victoria) being white, Makoto (Sara) being almost Blackface, Minako (Carrie) being Latina, Blue (Ami) being in a wheelchair, and Rei (Dana) strangely remaining Asian. Because Rocky Solotoff was too stupid to grasp the concept of Sailor Fuku, he assumed the "Sailor" part of the title meant they were literal sailors, and thus gave them actual space sails to fly on, with Blue being limited to a Metron Chair knockoff. That shot lasers.

If you though having out-of-touch executives and network censors cut out all the violence and character development from the English dub were as bad as sub purists said, well, you ain't seen nothing yet. To this day, Solotoff's version of Sailor Moon has not been exhibited publicly on account of its sheer awfulness. Unfortunately, some poor soul had the strength to bootleg part of it, and posted it on the Internet years later. 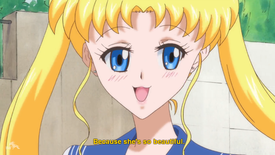 Why the long face?

If you've ever found yourself just sitting there watching Sailor Moon and thought how it's way too long with all the filler plots, and wanted an overly fast-paced reboot story that ignores the majority of the characters. Then, while your first wish was being granted, you wished that its art style would be so rushed and triangular that college professors would use the character designs to teach trigonometric functions to their first-year students. Before realizing or lamenting over how you wasted the first two wishes, you threw away the third to have Toei Animation license the English dub to the high-pitched voices from Viz Media.

Thus, Sailor Moon Crystal was born. The first episode of Crystal was released on the Crunchyroll streaming service on June 30, 2014, to commemorate Usagi's in-universe 33rd birthday, and also to celebrate 20 years of people watching a 14-year-old Japanese girl that appears suspiciously American with blonde hair, poor grades, no discipline, and a love for toast. This reboot replaced the original's charming cel animation with overly-clean digital animation, triangular faces, and legs that go up to the characters' shoulders.

Crystal does have a plot, or at least we've been told it does. The main purpose of the Crystal reboot is to canonize the relationships of the Senshi and appeal to shippers. The show names their boyfriends because, as Sailor Moon is with Tuxedo Mask and The Four Heavenly Kings or Queen Beryl's brainwashed bitches were subordinates of Tuxedo Mask, they were, at one time, all hooking up, because Soap Opera Rules say that they should. Without getting into the plot, here are the pairings: MercuryxZoicite, MarsxJadeite, JupiterxNephyrite, VenusxKunzite. 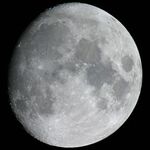 Moon, but no sailor.

Sailor Moon received international acclaim, becoming one of the most popular manga and anime series of all-time. Critic Fred Patten credits Takeuchi with popularizing the concept of a sentai ("team") of magical girls, unlike Power Rangers which was merely a sentai of boys and one girl. Anime astrologist Paul Gravett credits the series with shining new moonlight on the magical girl genre, as previous magical girls such as Cutie Honey did not use their powers to fight evil, but merely distracted enemies with their "talent". The Senshis' girl power changed all that, and magical girls could now zap their enemies from a distance rather than wooing them or doing hand-to-hand combat.

Most of Sailor Moon's viewers, ironically, were male. Some critics suggested that despite being aimed at young girls, the show had an adventurous and boyish feel to it. But really, we all know it's because it gave '90s boys — well, let's just say it really stroked a chord with them, and they rushed home every day after a long day of school to watch another episode and recreate this magical feeling. The most popular Sailor Moon purchases among males were the cutouts, available exclusively in the back of video rental stores, farther back from the "adult" section.