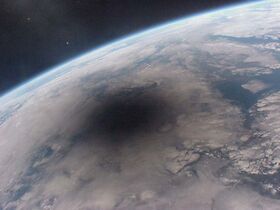 If the Fantastic Four had been a little less preoccupied with wedding arrangements and a little quicker to get to London, they could have stopped the evil Galactus from poking this hole in the planet.

An eclipse is an astronomical event that occurs when one celestial object moves into the shadow of another. The term is derived from the ancient Greek noun ἔκλειψις, a combination of the prefix ἐκ, from preposition ἐκ, "out of"; and λείπω, "lips." "Out of lips" describes the typical exclamation when people see an eclipse (at least, when there is also a fireworks show).

The term is most often used to describe either a solar eclipse, when the moon's shadow crosses the earth's surface, or a lunar eclipse, when the moon moves into the shadow of earth. The dual meaning ensures that no celestial object's feelings are hurt by perceived discrimination. However, the term can also refer to such events beyond the earth-moon system, such as a planet moving into the shadow cast by one of its moons, a moon passing into the shadow cast by its parent planet, or a moon going into a tunnel and losing the radio signal just when the song gets to the good part. Binary stars can also produce eclipses if the plane of their orbit intersects the position of the observer. Therefore, whenever an earthling gets into position to see it, and has two spare centuries to watch the entire crossing, it is nice to know there will be a word for it. 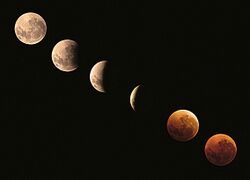 The progress of a lunar eclipse. The reader can simulate one by overdosing on quaaludes and staring at the moon for 28 days.

A syzygy is the alignment of three or more celestial bodies in the same gravitational system along a straight line. The word is usually used in context with the sun, earth, the moon or a planet. When syzygy occurs, God suddenly stands up and yells, "Bingo!!!" Generally, He also spills His tea. If God is instead playing Scrabble, syzygy never occurs, as there are not enough Y tiles.

The high point of the practice of astronomy is to have ten-dollar words such as "syzygy" to describe two-bit concepts such as the eclipse. The pronunciation of the word is not taught until students are on the Ph.D. track. In contrast, the xyzzy is an unrelated concept having nothing to do with astronomy. The wu-wu-wu is the alignment of three or more stooges, though often they weave rather than align.

A syzygy — sorry, an eclipse — occurs when a star aligns with two celestial bodies, such as a planet and a moon. The closer body casts a shadow that intersects the more distant body. This means that "things get dark." The region of shadow is divided into an umbra, where the light from the star is completely blocked, and a penumbra, where only a portion of the light is blocked. The famous Roe v. Wade decision legalizing abortion across America relied on a discussion of umbras and penumbras, although no syzygy nor eclipse was taking place at the time. Happily, the technical talk took everyone's mind off the actual topic.

For those without comedic tastes, the so-called experts at Wikipedia have an article about Eclipse.

Beyond the end of the umbra is a region called the antumbra. For an observer inside the antumbra of a solar eclipse, for example, the moon appears smaller than the sun, resulting in an annular eclipse. Annulling an eclipse also affects folks in the umbra and penumbra.

For spherical bodies, when the occluding object is smaller than the star, the length (L) of the umbra's cone-shaped shadow is given by:

where Rs is the radius of the star, Ro is the occulting object's radius, and r is the distance from the star to the occulting object. For earth, L = 1.384×106 km, which is much larger than the moon's 3.844×105 km. Hence the umbral cone of the earth can completely envelop the moon. It can also wipe out most Urban Renewal districts, which can induce politicians to angle for a tax increase.

A transit is a type of syzygy where the nearer object is smaller than the more distant object. If one stands in a transit station, one often sees many attractive buses and trolleys move past the warehouses across the street. Usually, however, none of them actually stop at the transit. Astronomically, it is actually a good thing when a celestial object under observation does not stop where you are.

An eclipse cycle is a series of eclipses separated by a certain interval because the bodies' orbits form repeating harmonic patterns. For example, the Saros cycle results in a repetition of a solar or lunar eclipse every 6,585 days. If it were not for astronomers, the reader would never notice this pattern. Each eclipse is viewed from a different part of the world. This makes it even less likely that anyone would care, if not for the astronomer. 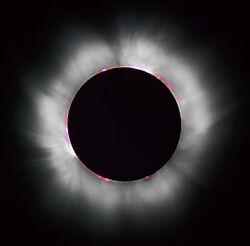 Totality during the 1999 solar eclipse. The things at the edge are referred to as "solar prominences," "coronal filaments," or "a really bad shoop."

Solar eclipses are brief. Under the best conditions, a total solar eclipse lasts only 7 minutes, 31 seconds — not even as long as MacArthur Park — and can be viewed along a track that is up to 250 km wide. But that is long enough for a leader who claimed he foresaw it to make a case to his fellow savages that all his enemies should be rounded up and put in dungeons for execution. Birds and animals also seem to think that all Hell is breaking loose. National elections can be equally exciting, especially in Latin America, but occur only every four or five years; and sometimes not at all.

A lunar eclipse occurs when the moon passes through the earth's shadow. This occurs only when there is a full moon. It is much more common to observe a lunar eclipse from a given location. It is also more common than observing one's second solar eclipse, or anything else, if one didn't take precautions the first time.

A lunar eclipse also lasts longer, taking several hours to complete, with totality lasting from 30 minutes to over an hour. Events that occur more often, last longer, and are more total are very popular, and that is Sarah's secret.

A picture of Jupiter and its moon Io. The black spot is Io's shadow, or further proof that the Hubble Space Telescope is broken for good.

Eclipses are impossible on Mercury and Venus, as they have no moons and rarely get in anyone's way. However, both have transited across the face of the Sun. There are on average 13 transits of Mercury each century — more numerous than transits uptown following a Sox game. Transits of Venus occur in pairs separated by an interval of eight years, a veritable celestial do-se-do, but each pair happens less than once a century.

On Mars, only partial solar eclipses are possible, because neither moon is large enough to cover the Sun's disc as seen from the planet's surface. Eclipses of the moons by Mars are routine, with hundreds occurring each earth year, and are accompanied by the little-green-man equivalent of cheering. There are also rare occasions when Deimos is eclipsed by Phobos.

The gas giant planets (Jupiter, Saturn, Uranus, and Neptune) have many moons, and everything is always in the way of the sun, which given how tiny the sun is out there, is not a big problem. Jupiter has four large moons, a low axial tilt, and available Synchro-Mesh® transmission, all of which make eclipses and transits more frequent. It is common to see the larger moons casting circular shadows upon Jupiter's cloudtops, if you are in the neighborhood.

The special beauty of an eclipse of Saturn is itself eclipsed by the fact that you have to be sitting on the far side of it.

On the other three gas giants, eclipses only occur at certain periods during the year. Titan, for example, has an orbital plane that only crosses the line to the sun twice along Saturn's orbit. So an eclipse is only possible every 15 years. It is a big deal.

Pluto, with its proportionately large moon, "My Sharona," has many eclipses. A series of mutual eclipses occurred between 1985 and 1990. None of them outweighed Pluto's serious problems for the day tourist.

In a binary star system, two stars orbit around their common center of mass. Their movements lie in a common orbital plane. When this plane is aligned with the location of an observer, the stars seem to pass in front of each other, and the brightness of the pair temporarily changes. This is called an eclipsing binary because a "starry zyzygy" would simply be confusing.

The first eclipsing binary discovered was Algol, in the constellation Perseus. Every 2.867 days, the star gets duller for over 9 hours because the dim one passes in front of the bright one. This explanation was devised in 1783. Previously, scientists thought it was Indians sending smoke signals.

And if I can merely borrow your young daughter for the night, I can also ensure that the sun will rise tomorrow morning.

Far exceeding the satisfaction of being able to tell the Unwashed that a strange phenomenon was merely an eclipse, the astronomer can predict future eclipses. Throughout our literature and cinema, protagonists and their audiences — who are from the 21st Century and understand that eclipses are routine zyzygies of celestial bodies whose orbits run like clockwork — acquire immense power over everyone else in the story — who are stuck in the middle ages and interpret the eclipse as the sun conking out for good.

The astronomer can thus extract remarkable concessions from royalty and laity alike, just for "doing a little dance" that results in the sun returning to full brightness.

Moreover, in movies such as Ladyhawke, eclipses are an exception to a rule. They are "night" occurring within a day. They thus neatly overturn magical spells, just as Obama-care was only a tax in court cases that needed it to be one, and never when an election was imminent. When astronomers go up against sorcerers, therefore, tricks like this let astronomers prevail. For this reason, very few universities still offer degree work in sorcery.