“We seem to be missing about 200 billion galaxies around here. Thats not bad.”

“Every so often, I like to stick my head out the window, look up, and smile for a satellite picture” 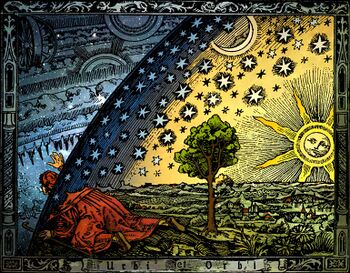 Sadly, this soon-to-be-decapitated astronomer never learned the phrase "Please keep head and arms inside the celestial spheres at all times".

The pseudoscience of astronomy is the ancient practice of studying and trying to understand things up in outer space. Of course the lies of astronomy were proven wrong thousands of years ago when the Greeks showed that the sky is actually made of crystal spheres. Astronomy, like alchemy, is now considered a defunct pseudoscience whose theories and predictions are so obviously false it is a wonder anyone believed them in the first place. It has been superseded by the accurate and consistent science of Astrology. Contrary to popular belief, astronomers still exist around the world practising their ancient rituals in observatories, universities, and with backyard telescopes.

Despite an endless list of studies proving the claims of astronomy wrong, they will be summarized here. Anyone can easily read this list and go out and refute their ridiculous claims.

Astronomers claim the universe is expanding like a fat man eating McDonalds and that the space between galaxies is growing larger over time. Of course this absurd claim violates the first rule of business, you can't get something for nothing. When you buy a piece of land, does it just keep on growing bigger without you having to get another mortgage or two? The cost of expanding space-time would be astronomical! Who is going to pay for an expanding universe? Nobody! Because nobody can afford it, especially with the recession. What is even more harebrained is that astronomers claim the expansion of the universe is accelerating. Not only is it supposedly getting bigger, it's getting bigger faster and faster. What a load of...

Astronomers claim that the sun is a star, contrary to common sense. Stars are holes in a sphere where light trickles through from the heavens surrounding the earth. If the sun were a star, it would have to be one giant hole through which all of the heavens would fall through onto the earth squishing everybody.

Another of Astronomy's claims is the law of gravity. If this were true all the women in the world would be attracted to obese people. Which thousands of Americans have learned is not true the hard way.

Over time, as this seemingly nonsensical study gained steam in its clandestine community, those who seemed to know more and more about the "universe" and the "factual study of astronomy" became heralded by the lesser, inferior folk. Edwin "the Bubble" Hubble, though not shaped like his name, coined the "fat man eating McDonalds" hypothesis when he was demonically worshiping his version of god, Milkious Wayious Gallactica, playing with many many other gods. None of the other gods particularly liked Milkious for its need to keep funneling McDonalds into its mouth (mouth being scientifically called a "super massive black hole" and commonly referred to as the celestial version of Sapphire's Precious) so they all ran away. Astronomers found this silly claim riveting and now believe that it is responsible for the expansion of whatever isn't happening on Earth (but who cares about that load of gumbo).

Albert "Crazy 'Stache" Einstein, though not low enough to be degraded as solely an astronomer, has attributed a few IQ-dropping ideas to astronomy. His claims on General and Special Relativity (which are super easy to disprove, believe me) talk about the cosmic speed limit of "light-speed" and also those black hole thingys referred to earlier.

Although there are hundreds of these "scientists" we call astronomers who have had a significant impact on this nonsense, there's no possible way to research all of their stories with enough time to transcribe them here for whatever reason. Here are some of the astronomers with abridged tales:

Nicolaus Copernicus - Arguably the most dim-witted of them all. He said that the Earth revolves around the SUN! HA! WHAT A LOAD THAT IS!

Galileo Galilei - Most notable achievement was being mentioned in Queen's Bohemian Rhapsody. He also invented the telescope and some other stuff.

Sir Isaac Newton - He might of had Assburger's disease because he invented Calculus when he was 23. He also had a super power that allowed him to drop apples from trees onto his own head.

Carl Sagan - A lot can be said about this man. He just wanted people to learn about science, yet the things he said made no sense (especially when denouncing Astrology, the master study). It was like he was trying to teach a league of intelligent beings why ground poops are called potatoes.

Bill "the Science Guy" Nye - He poisoned our children at young ages. An example of what every sane human being should try not to be.

Disregarding the obvious difference which is the fact that Astrology actually has an utility to society, it is interesting to examine the relationship between the two. Astronomers lay down the claim that they can look back in time due to the finite speed of light. The farther away one looks, the farther light has traveled, thus the farther back in time one can see. This of course pales in comparison to the amazing ability of astrologers to actually look into the future and forsee upcoming events like the end of the world in 2012. Also in the earth is flat.

To get revenge on astrologers, astronomers demoted Pluto from a planet to a dwarf satellite. This was an attempt to limit the predictive power of their horoscopes. Of course it failed because astrologers predicted what was going to happen and took appropriate action to fix the problem. Instead of using Pluto, they now use Planet X which is going to swing by the earth in December 2012 and kill us all.

While astronomy is a complete and utter waste of time and resources, it does contain one amazing thing, the jokes! Astronomy jokes are known throughout the world for their quality and attention to detail. Some notable examples include:

"Astronomers do it all night long."

"Astronomy studies the passing of gas out of the center of the black hole in Uranus."

"How many astronomers does it take to change a light bulb? None - light bulbs add to light pollution and should therefore not be replaced when they burn out!"