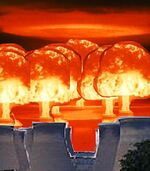 Nuclear power is vital to the existence of modern life, as without it humans would shrivel up and die, much like if modern humans were deprived of the internet. Nuclear Power has been harassed by many countries for its uses in powering vacuum cleaners, left handed pencils and can-openers. Nuclear Power is available in most hardware stores, although price varies greatly based on the quality and stability of the product.

Nuclear Power is an extremely powerful source of energy, first discovered in 1922 by Albert Einstein when he carried out tests on discarded Whopper remains using a jar of peanut butter and a chemistry textbook. He amazed audiences with its brilliance at the 1932 Olympic Games in Los Angeles, when it allowed top Australian athlete Ian Thorpe to win the 100m metres final in the record time 5.81 nanoseconds, a record which stood until 1983. Later on, at the closing ceremony, Nikki Webster was powered by nuclear power, which led to her being taken away for scientific research for the Ebola virus.

Then in 1942, Enrico Fermi, being an immigrant, was ordered by the government to "get a job or get your dago wop ass back to Sicily or wherever you greaseball goombas come from" (FDR's words). He got a job as janitor at the University of Chicago, mopping up puke and suchlike. One day, while chasing rats for lunch in the basement of the Physics Building, he accidentally pushed some graphite and uranium rods up his ass, thus creating the first atomic piles. The rest of the nuclear technology subsequently developed at the U of C he sold to Russia for a bottle of cheap chianti and a pair of brass knuckles for his cousin Vito.

But later developments ensued. The Advent of a new form of nuclear power, derived from Pwnage, was developed by Dr. Pwnavitz. Thus the term Nuclear Pwnage emurged, as a new factor of pwning pee-ons around the world. The first Nuclear Pwnage Plant, Pwntendo Unit 1, was completed in 1983, during the beginning of the BBS era. It was powered by the pwnage on BBS sites, as well as primitive online gaming, or more like serial linked game systems. It didn't put out too much Pwnage, just about 13 mega pwns an hour (MPH). This led to bigger and better pwnage systems to come.

Nuclear Power, as earlier stated, powers many modern devices. It is also used to make electricity, mainly used for powering computers and TV sets. More recently, it has been used to power unmanned probes sent off to explore dark, previously impenetrable areas of space, like the region between Ann Coulter's legs. Nuclear Power has occasionally been used in weapons, mainly for aesthetic pleasure. The Japanese, in particular, enjoy using nuclear energy to create large entertainment franchises like Godzilla.

In 1979, a crisis arose at the Three Mile Island nuclear power plant near Harrisburg, Pennsylvania, when plant operators, still woozy from their nine hour backshift naps, awoke to discover that something really funky had happened and the whole place almost blew up. After several days of confusion as to how to respond, the operators decided to blame President Jimmy Carter for the mess, and put in for all the overtime they could. While the reactor was destroyed, there were no injuries, execpt to Ralph Nader's delusions of relevancy.

In 1986, a meltdown occurred at the Chernobyl nuclear plant in the Ukraine, which was then being sublet by Soviet Russians as a good place to do stuff like that. Nothing was done or announced about the accident for several days, as the word “Chernobyl” in Ukrainian actually means “orange sherbet”, so when the news initially reached Moscow, no one was concerned that it had melted. During the interval, almost as much pwnage was released to the environment as during one of Donald Rumsfeld’s global pwnage movements; fortunately a good sum of people died as a direct result of this (no one that mattered – this WAS the Ukraine). However, the pwnage released was responsible for the resurrection of an army of 657,000 Belarussian zombies that descended on the city of Kiev, eating everyone except the Jews. The crisis was finally resolved when the Soviet government secretly called in George Romero to explain that cannibalistic zombies were a bunch of made up bullshit that he had made a lot of money off of. Whereupon the zombies returned to their normal occupation of Communist Party functionaries and Green Bay Packers fans which, oddly enough weren't that different then being zombies.

There were no other accidents involving nuclear power and there never will be.

It was often believed that Godzilla and tentacle rape monsters would destroy the Japanese. You add nuclear power to the mix.

A CHILD'S VIEW OF WHAT NUCLEAR POWER/PWNAGE IS (a seriously Pwned child, that is)[edit]

Nuclear Power is a big thing that blows up all the time. if you touch it , it blows up. if you eat it, it blows up in your stomach. (its very painful since you don't have a stomach and you can't eat delicious twinkies any more.) anyway almost if you do anything it will blow up. the only to make it not blow up is to have chuck Norris come and fly into space to throw it into the sun. then he'll battle superman for supreme superiority as ruler of the universe and we'll have to bow down to the winner and give him presents. but back to nuclear stuff. don't touch it or you will turn big and green like the hulk. and no one wants to look like him. if you put water on it, it will grow into a big nuclear piece of shit and eat everything in it's path. so don't do anything that has to do with nuclear power and leave it to our c average president and army filled of queers an transvestides deal with it.

This article lacks a Trivia section. It could be improved by removing items from the main article, as well as adding inappropriate ones. Einstein came up with the name Nuclear Power because his dog had just recovered from Herpes and its urine was no longer cloudy. It is believed that Jack Baxter eats nuclear fuel rods, and that is where he gets his awesomeness from, but this has not been proved, as anyone who brings this up mysteriously dies 4.5 seconds later. 4.5 seconds is the exact time it takes Zombie Jesus to materialise on Earth, but Jack Baxter has always denied being the second coming of Zombie Jesus. Nuclear power spelt backwards is fairly lights, thus making it a palindrome.