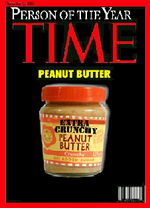 Peanut Butter dressed up as 'extra chunky' for the special occasion.

Peanut butter is a dairy product made by milking the ripe peanut plant. Peanut butter comes in various types and styles: Chunky/creamy, salted/unsalted, with or without peanut oil, kosher/not kosher, natural/artificial, brown/ochre, and green. With 7 distinct characteristic traits, each yielding between +1 and +3 hit-points of healing power, there are 21 distinct types of peanut butter. Chunky style has cured cancer and fed the hungry, whilst smooth style kicks puppies. 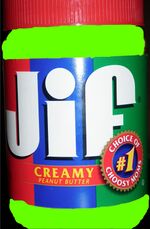 Green peanut butter derives its color by being highly radioactive.

Peanut butter has been credited with enhancing peace and harmony. Even more so than Viagra, it has enhanced relationships on many different levels. While peanut butter's influence has been known for years by a small yet dedicated group of enthusiasts calling themselves Inmates of the Federal Prison System, it was after the filming of an HBO documentary at a maximum security prison in Illinois that the group's cause gained national attention with the revelation of a new type of peanut butter called chunky. While similar in both spelling and pronunciation to the chunky peanut butter found on the shelf of your local grocery store, the chunky found in prison is more humble in origin and easier to make.

Soon after the HBO documentary aired, executives at a yet-to-be-named peanut butter manufacturer announced plans to produce their own version of chunky to be called "organic."

The first record of a civilization using peanut butter was the Pre-Columbian peoples of Mexico who used ground peanuts as a base for a number of their food sauces. The "tl" sound so common in these indigenous words, from "Seattle" to "Aztlan," was originally the sound of a speaker trying to get the peanut butter off his tongue and palate.

Because the Pre-Columbians failed to patent their farming methood, and because Columbia so stubbornly refused to exist, in 1890, George A. Bayle Jr. began to sell ground peanuts as a vegetarian protein supplement for people with bad or no teeth and/or braces. The first market response was overwhelmingly bad and in response Bayle created the creamy (or smooth) type of peanut butter.

Peanut butter was used in the White House of Abraham Lincoln. Lincoln, realizing its potential for racial harmony, planned to popularize it throughout the Union as a "Negro love spread." He may have been finalizing this plan at the Ford theater, during the performance of an unusually boring play, when anti-legume activist John Wilkes Booth struck, meaning that the secret was buried with Honest Abe. Years later, Grover Cleveland stumbled upon this secret and, in a revolutionary innovation, gave George Washington Carver the recipe. He then created the illuminutti to protect the secret.

In 1969, Canada made peanut butter a Schedule III Drug. Possession, sale, or consumption of peanut butter results in 10 years in jail. Unfortunately, in 2013, Prime Minister Stephen Harper, never an attentive student of history, was arrested for possession of 30 jars of peanut butter smuggled through Detroit, where even more unfortunately, he will have to do the time.

Peanut butter is a multi-million dollar industry. Peanut Butter has often been fused with other products, such as Chocolate, Condoms, Chocolate Condoms, and a guy with a tattoo in the shape of Florida on his arm. 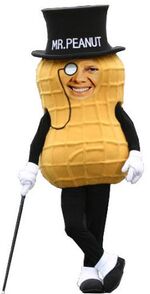 It is common for peanuts to become President because they have bipartisan support.

It takes two Korean children three years of hard labor to cultivate a single peanut. Many of them die as a result of this arduous task from an ailment the local people call "peanut lung." One peanut on the black market can garner enough money to feed a poor Korean family for a week. Though peanut theft is not uncommon, the penalties are harsh and include: loss of limb (hands, feet or noses), denial of toiletpaper rations and public wedgies.

After harvesting, Peanut butter enters puberty. Peanut butter puberty is much like our puberty. Sometimes the peanut butter grows hair, sometimes its voice cracks, but most of all, the knutz grow and expand. 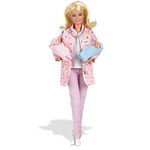 The average Peanut butter smuggler is female, white, stands about 6 feet tall and weighs somewhere around 135 pounds. She may also smell like plastic.

After making the long journey through life, peanut butter is ready to be eaten by the masses. It is put in plastic jars and sealed with the magic foil that is a separate product of the peanut plant. Then the peanut butter is taken to Mexico and illegally smuggled into the United States.

Consumers should always keep a bottle of peanut butter solvent nearby, in case their mouths become stuck shut. This will render the consumer unable to speak, unless he or she knows the ancient Aztec language (see above), which could be spoken with a mouth stuck shut.

Doctors advise that a significant percentage of school children are allergic to peanut butter. An ample dollop on a slice of bread can give them hives, cause swelling, and even keep them from breathing. This seems to be another step in the disturbing trend of our schools to cater to the spoiled child and make exceptions for them. The editors recommend that any child claiming an allergy be given a double helping and perhaps be force-fed until he quits his bitching and becomes a member of the team.

Peanut butter also goes well with jelly. Unfortunately, jelly can be lethal, though no more lethal than peanut butter.