Kosher (Also kosher kheshim and shevim netekhevim) is a mysterious Jewish spice consumed by Jews in large quantities, without which food is unpalatable to them. Despite the consumption of such large quantities of this substance for so long a period of time, little is really known about its composition, other than that the flesh of swine contains an enzyme which instantly and permanently inactivates it. (This is due, of course, to the total control by Jews of the media, by which means they are able to suppress the publication of the composition of Kosher, thus keeping the proceeds of the lucrative Kosher Tax to themselves, with which they control world finance.) See also, "The Protocols of the Elders of Empire Poultry".

Kosher, comes from the Hebrew word "Kasher" meaning "toxicity" or "inedibility". Some experts say that observant Jews eat the Kosher spice as a form of self inflicted pain, so as to atone for one's sins. Although many attempts have been made to crack the secret of Kosher, resulting in such products as Kosher Delis, Kosher pickles, Kosher salt, etc., the true Jewish person cannot even bear the taste of a minute quantity of such ersatz products, although occasionally the lesser Jews may dabble. To date, the closest approximation to Kosher has been by the Chinese in their numerous eating establishments, acceptable to all but the most fastidious of Jews. Some researchers suspect that this mysterious Jewish spice is chemically similar to MSG, also known as Mad Stinking Goat extract.

One of the many consequences of eating kosher

Any such attempts at producing Kosher are investigated by a committee of Rabbis (from the word, kohlrabi, a kosher vegetable which is nonetheless inedible, and an obvious reference to the Kol Nidre, a prayer said on Yom Kipper, a day on which no food is eaten, except kippers; the connections are quite clear when delineated thusly), and if the attempt is deemed successful, the food is granted the coveted hechsher (meaning, a sound most often followed by Gesundheit). In United States, the most common hechsher is "Oh, you can eat this now!", usually shortened to OU.

On their holiday Passover, Jews subsist on a special variety of Kosher called the matzoh from the Hebrew word for found, as in "I just found this, do you think it's edible?". The response of most people when offered a matzoh to eat gives the festival its name.

The laws of Kashrut are not, however, applicable in Chinese restaurants or when on holiday.

Some scholars have proposed that Kosher properties can be transferred to otherwise non-Kosher objects. For example, pigs are not non-kosher per se, they are non-kosher because of their habits and lifestyle. Though it would be difficult to raise pigs outside of a porcine lifestyle and environment, in theory, it may be possible to create Kosher pigs and hence, Kosher bacon.

Many scientists speculate over what causes this kosher spice. Studies have found that the blood of young virgins is high in it, which may explain the odd practice of something known as a brissבְרִית מִילָה . In which blood can easily be obtained to bless food with. The result, of course, is delicious. 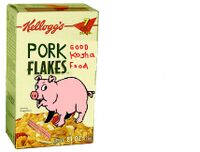 Be a good Jewish child and eat your pork flakes

For those without comedic tastes, the self-proclaimed experts at Wikipedia have an article about Kosher.
[ v • d • e ]
☼ The Elders of Zion ☼