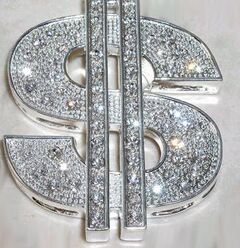 The remarkable new innovation of Hip Hop Jewry. Everybody get your Bling on!

Man, get that away from your--size yer jewry right, mofo!

Also known as Bling!, Jewry is the primary method by which animals display social status to one another, generally via accessories that can be worn. The multifaceted impact of jewry has included jealousy, disappointment, cat burglars, larger police forces, egomania and the spectacular success of Crackerjack boxes in North America.

Jewry has come a long way since the first jewrer, a slave in ancient Egypt, thought one rock was prettier than the rest. As the story goes, his throwing some of the other stones at fellow slaves brought on a strong interest in what he was hoarding; another slave murdered him, took the pretty rock and his social standing, and thereby perpetrated the first known case of Identity Theft.

Present-day jewry is now a major televised contest, much like Iron Chef, in which jewrers from around the world challenge one another with different materials, methods and genres.

Jewry has had an inestimable effect upon history. From the Trojans who thought the nice wooden equine outside their walls would make a neat accessory to one of their temples to the terrorists who hated two jewry buildings in New York so much they had to destroy them, the shadow of jewry has been there. 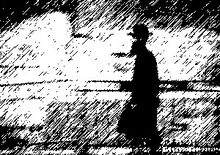 In the late 1940s world economists accused jewrers of monopolizing their trade and keeping prices artificially high. They called this practice Jewrymandering, and cases were slowly brought to international court. Although no evidence of such a conspiracy was ever produced, jewrers reacted snarkily and formed the perfectly legal organization of a guild. Golda Meir was the first President of the Jewrymanderers Guild, from 1969 - 1974. During her presidency Operation Wrath of God was carried out: the guild started a world war with automobile manufacturers over which presented social status best. 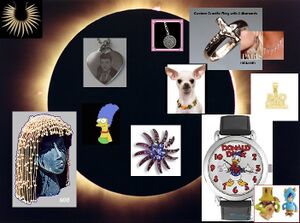 The Marge Simpson necklace is one of the most sought-after pieces of jewry in the world, coming second only to the one-of-a-kind Donald Duck spinning necktie watch. This collage is NOT jewry, though I did make it.

Many years of jewrymandering training and experience are necessary to get the ingredients for jewry just right.

For the serious student of jewrology, what constitutes jewry and what does not can often be a difficult issue. For example:

Philosophers have long debated the nature of jewry. Is it a wave or a particle? Indicative of showmanship or gamesmanship? Just a damn distracting nuisance? No definitive answer has been reached, of course; the nature of philosophers, like rat exterminators, is not to solve problems but rather to carry on the impression of a great battle between man and idea.

Professional jewrologists at the Second International concluded that Mr. T's chesthair did constitute jewry, but the feathers in the Kaiserine's hat did not. In the most famously controversial Jewrological Court case, Faberge and Cartier ruled two-to-one against Tiffany that the '...On A Stick' pieces presented by Vlad the Impaler did qualify. 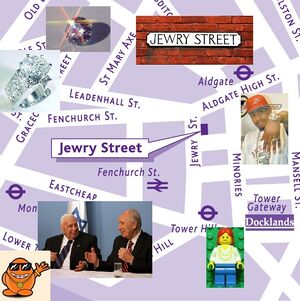 Memories of Jewry Street, where all the world's jewry is painstakingly handcrafted.

The secret apprenticeship program of the Jewrymanderers Guild traditionally takes four years, to coincide with the World Cup, and involves being frequently shouted at. Apprentices are shown:

In 1984 the Jewrymanderers Guild consolidated all operations on Jewry Street in Manchester, England, and since that time all jewry manufacture has been located solely there.

A designated UNESCO world heritage site and popular tourist destination, non-manufacturing sections of Jewry Street are open to the public from 9AM - 4:30 PM, Monday through Saturday. Schoolchildren often take field trips to Jewry Street and are treated to the sight of Blingy Mouse, the official mascot. The IRA did plan to bomb Jewry Street in 1982, but Gerry Adams, unwilling to give up his gem-encrusted glasses-frames and brass knuckles, could not issue the final order in good conscience.