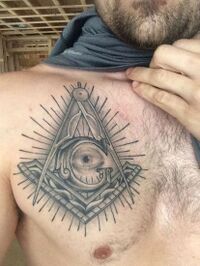 The holiest symbol of Freemasonry: One Eye dumb Pyramid. Seen that before?

The Freemasons are a secret organization intent on world domination, though technically that is also a secret. They are characterized by secret handshakes, secret rituals, and a secret hierarchy — so secret that, if the world one day becomes dominated, it will be impossible to tell whether or not the Freemasons did it.

In summary, they are Bible ninjas.

The Freemasons were founded in 1163 A.D. by Thomas 'Elsie' Elliot and Sidney 'Vera' Thornton, disgruntled, deaf bricklayers from Hull, England. In 12th Century England, transvestism was less widely accepted than nowadays and since the guilds had cathedral contracts pretty well sown up, forming their own association seemed a natural solution to their predicament. These days, equality being what it is, transvestite builders are commonplace and may be seen on building sites throughout the land, climbing high ladders, falling off scaffolding, putting up crooked windows and getting their heads stuck in quick-drying cement, just like every other builder.

The Freemasons was the first lucrative "pyramid scheme."

Elsie and Vera were of course burned at the stake, in full drag, allegedly screaming the chorus to Don't Cry For Me Argentina, on 31 March 1164. The charges against them were so numerous that the judge fell asleep while reading them and had to be roused by a small boy who lived beneath his hassock, called Wee Tim. All the builders in the land were present for the execution, and most jeered and threw wet cement-cakes at the victims. So accurate was their aim that Elsie and Vera were not so much burnt as baked, as the cement hardened rapidly with the heat and encased the unfortunate pair from head to toe in a cement overcoat. Later, their remains were hoisted to the roof of a nearby chip shop, where they remained for years, attracting tourists and souvenir hunters.

This also explains why Freemasons banned women as full members. They can become 'Ladymasons,' but hard-line Freemasons view this as revisionist heresy, like the Mormons who tap-danced from officially-sanctioned polygamy to a 'relevation' that God had changed His mind.

Although transvestism is only one criterion for membership to the Freemasons, cement overcoats quickly fell out of favour, despite their huge ritual significance. Public burnings of members still take place weekly at the site of Elsie and Vera's chip shop in Bermondsey, London, and are well attended by members of the British Royal Family.

Current Grand Pumpernickel "Talulah" has described, from an insider's point of view, the innermost workings of the organisation:

If Minecraft is any indication, people would pay a monthly subscription fee to work on a virtual construction crew, however Mason normally isn't an available class in most RPG's. Nor is baker or candle stick maker because they tend to sit around being constructive; unlike the fighters, mages, and thieves guilds which prefer to loot and pillage. Presumably though, someone had to build all those needlessly elaborate dungeons you run around.

For those without comedic tastes, the so-called experts at Wikipedia have an article about Freemasons. 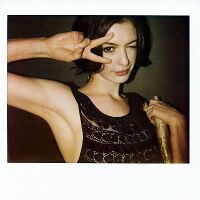 Anne Hathaway fails to convince Masons that she could count as an honorary man.

The Freemasons was originally a secret agency that planned to control the entire universe with cheap tricks such as outspending everyone else, thereby to unite the world and create a World Government called the "New World Order" in which the human population is reduced to the magic number of 42, one-tenth of which are assurred accession to heaven and the remainder can fight about the fractional part.

The society was the 1668 joint brainchild of French president Napoleon Bonaparte and Jewish nerd David Ben-Gurion. The reader will recognize their next big collaborations, the Illuminati and the Law of the Sea Treaty.

Membership peaked around 1760, when a man named Charlie Chaplin joined the association. He thought that the world could be united even faster through sex, and founded Playboy Magazine. In short order, the Industrial Revolution sprang up, as men started to volunteer for overtime just to be able to afford a news-stand copy.

The Freemasons, concerned with flagging membership, gave up their founding ideas and developed new technology to attract new, paying members, including the bikini, YouTube, and finally the Adult Disney Channel, which for the first time applied Rule 34 to the innocent allure of Minnie Mouse.

Much, much later, the Freemasons — specifically, F.A.&N.L.M. Lodge № 647 (Free, Accepted, and Nearly Legitimate Masons, Schenectady Synod) which Google Maps places somewhere near the middle of New York City's Hudson River — performed a secret ritual on Uncyclopedia's webhost, the ritual also known by its cryptic initials, to-wit, D.M.C.A. Minions of the Grand Poohbah demanded that the article describing the organization be rewritten so as not to use the organization's logo, though Uncyclopedia had an obvious right to do so through the doctrine of Foul Use, the Latin legal phrase that means, "We are pranksters, though we are not quite sure what you are." Senior Editors had to repair the entire article to do without either the central illustration or the hole neatly ripped in it by webhost personnel, and incidentally to do without the central comedy strategy of masturbation. 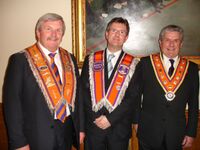 The Orange Order is for Freemasons who don't like women or Catholics.

Half off and buy one get one free masons[edit]

There were once guilds that organized stone craftsmen into smaller mom and pop shops, but like Walmart does to its competition, the Free Masons out sold the Half Off and Buy One Get One Free Masons with their impossibly cheap deals and their quality products made in Chinese sweatshops.