Oh, he looks sweet, but he'd gut you as soon as he looks at you.

From the dawn of time, the affairs of mankind have been scrutinised and controlled by a sinister organisation. Some have dimly glimpsed this mysterious force and suggested that the Illuminati, the Freemasons, the Trilateral Comission or the Delaware Comission on Sport Fishing. But all of these organisations are but pale reflections of the true power that has, over the centuries, controlled human thought and progress. That organisation is the Monkey Illuminati.

The Earth was created by God, Xenu and Oprah. About a month later, life was begun by an exploding Jageroth spaceship that Doctor Who prevented Scarroth from saving.

Soon, higher life had developed by means of Natural Intelligent Design-volution. At first, the dinosaurs ruled the Earth, but they were soon stung to death by the bees. Then came the rise of the Earth's new masters: the Monkeys! These cute little poop-chuckers formed vast empires and founded a great civilization, spanning the world. Humans, like all the higher apes were their slaves and playthings. Humans were forced to toil for their adoribly cruel masters by toiling in the banana foundries, working their fingers to the bone stitching wee little fezzes and vests, and satisfying the insatiable lust of the monkey noblity. Still, we had it better than the gorillas, who were on diaper patrol.

Whether dealing with monkeys, apes or lemurs, the important thing is to shoot first!

The humans plotted in secret to free themselves from their monkey overlords, making a secret alliance with the gorillas, orangutans and chimps. By carefully manipulating the monkeys, they were able to escalate simmering tensions between monkey groups. After many patient decades, the plan paid off. Lord Popo, the leader of the Duchy of Spider Monkeys had been nominated for the position of Minister of Soft Fruits, but was passed over in favour of Baron Eek of the Howler Monkey Federation. The Spider Monkeys seceded, precipitating the secession of the proboscis monkeys and their close allies the macaques.

Soon the monkey empire was spiraling downwards into civil war, and the higher apes were able to seize the moment and made a bid for freedom. The chimps and gorillas were hopeful of forming a tri-partitite state with the humans, but the humans betrayed their former allies, imprisoning them in the great rainforrests of Africa and Asia.

The Founding of the Monkey Illuminati[edit] 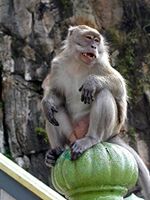 Baron Filth-Hurler the 7th, Supposed founder of the Monkey Illuminati.

The descendents of the Monkey Lords descended into barbarism, whilst the Humans gradually forgot their servetude and went on to found new empires of their own - Rome, Persia, China, Wales and so on.

Meanwhile, the monkeys patched up their differences and made peace with the apes, and plotted their revenge. Realising that they were in no position to challenge the military might of the humans, they formed an organisiation dedicated to operating behind the scenes in order to manouever humanity towards its doom. Thus, in a small coffee-house in Munich, the Monkey Illuminati was born. Every major calamity in human affairs for the last two-thousand years has been a part of the MI's program to destroy the human race.

A complete appraisal of all of the horrors unleashed upon an unsuspecting world by Monkeys is impossible here due to length constraints with my attention span.

The monkeys destruction of Atlantis was carefully planned over many years. By encouraging hubris amongst the Atlanteans, they hoped to lead the Atlanteans to attack Athens, in direct defiance of the will of the gods. The gods, they reasoned, would surely punish them by sinking fair Atlantis beneath the waves in a single day and night. About fifty years into this plan, they discovered that Atlantis had a plug, and so saved time by just pulling it out.

The Monkeys' next target was the Roman Empire, a loose conglomerate of friendly nations that existed in the Mediterranean. They traded together peacefully, and settled all of their differences with friendly sporting events and mime. Or so it was, until a lowly Roman mime named Julius Caesar made a Faustian deal with the monkeys. The monkey's political network raised Caesar to supremacy. Caesar repaid his simian overlords by transforming Rome into a brutal Roman Empire based on fierce militarism and greed. The monkeys shrieked and capered with victory!

It may take an infinite number of monkeys to write Hamlet, but it took just two monkeys to lay the groundwork for Shakespere's plays Richard II, Henry IV (pts 1 & 2), Henry V, and Henry VI (pts 1, 2 and 3).

The Kings of France and England were the bestest friends ever. Every week, they'd go on a picnic and fly kites together. However, each king "owned" a monkey! The monkey belonging to the King of England convinced his master that the King of France thought that England was a military lightweight, able to conduct a war for only four years, five tops. Determined to prove himself in the eyes of his friend, he invaded France. Meanwhile, the French King's monkey told his human that the English were only invading to prove that the French couldn't keep making war for ten years straight. As each king and his successors sought to prove that they could war for longest, France and England were laid waste for a century. But mostly France.

However, by the late 18th Century, the French kings had gradually stopped listening to their monkeys, and the Monkey Illuminati's power in France began to decline. So the monkeys swore ultimate revenge - the deposing of the Royal family.

This was no easy task. The people of Paris were happy and prosperous and loved their king, admiring his intelligence and his queen's humanitarian nature. But the filthy monkeys poisoned the good relation between ruler and ruled with catchy songs about how great it would be to chop of the king's head. They also used their allies in the international finance sector to destroy the French currency.

(As an aside, Jews don't control the banks; that's just what the monkeys want you to believe. The banks are actually run by the Zulus and Romanians. The monkeys may well eliminate me for revealing this.)

The people were now poor and had nothing to do but sing catchy songs. And you know what happens when people sing catchy songs about killing people - it's only a small step to actually killing people. The French revolted against the king, who was replace by monkey agent Napoleon, who plunged all of Europe into war.

The monkeys totally caused this too. Yes, way! You want to know why Hitler shot himself? If 12 monkeys were knocking at your door wouldn't you?

Trust me, you don't want to know.

Having failed to destroy the humans with war, the monkeys tried to destroy us with peace! Four humans were captured by the monkeys and subjected to months of gruelling brainwashing treatment, and taught to sing. They were unleashed upon the world as "The Monkees", and their message of singing, having fun and wearing breathtakingly stupid clothes destroyed a generation.

The Monkey Illuminati also did a lot of horrible things in Asia, Africa, The Middle East and so on. However, due to monkey manipulation of the education systems of the English speaking countries, we are so deeply entrenched in the Euro-American view of world history that we are incapable of understanding what they may have been. Like there was something in Nanking in the 1930s... maybe it was a flower show or something... I don't know. And then there was the collapse of the civilization of... funny word... ends with a vowel... something... it was in Africa, I guess... No, I've lost it. 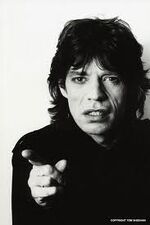 Not a monkey.
Retrieved from "https://uncyclopedia.com/w/index.php?title=Monkey_Illuminati&oldid=6143469"
Categories: